There Is Still Time to Prevent Civil War in Venezuela 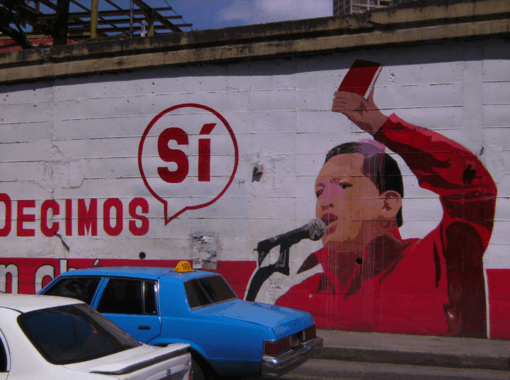 28 Jul 2017 – As Latin America celebrates the end of the region’s longest violent conflict in Colombia, I have watched with pain and dismay as its neighbor, and my adopted country, Venezuela, rapidly descends towards a deadly state of war.  I lived in Venezuela for more than a decade, much of that time as an advisor and friend to former president Hugo Chavez.  I believed in and strongly defended his bold efforts to eradicate poverty, empower grassroots democracy, redistribute Venezuela’s massive oil wealth and ensure universal healthcare and education for all Venezuelans. Today, many of Chavez’s flagship social justice policies are being unraveled by an economic and political crisis that has spiraled out of control under the government of his successor, Nicolas Maduro.

Over one hundred Venezuelans have been killed during months of anti-government protests, some at the hands of state repression, others by protestors using letal weapons.  The demonstrations arose from the massive discontent throughout the country as food shortages, lack of access to medications, skyrocketing inflation and erosion of democratic institutions have intensified since Maduro won office by a slim margin in 2013.  The opposition has made no attempt to conceal its objective of regime change and efforts by the Venezuelan government to dialogue were met with skepticism and distrust and resulted ineffective.  The more the opposition ramps up its protests, the deeper in the government digs.  Neither side seems poised to negotiate a way out of what could become the region’s next elongated, bloody war.

President Maduro’s convening of a constituent assembly to rewrite the nation’s constitution has been vehemently rejected by the opposition and has caused severe internal rifts within his own movement.  While Maduro asserts the assembly – set to be elected on July 30 – will bring peace to the turbulent nation and deepen grassroots democracy, he has offered vague reasons to support that claim. The move is widely seen as an attempt to retain power.  Ruling party members have stated that once installed, the assembly will have superseding authority over the established branches of government and elected officials, including the majority opposition parliament and the Attorney General, who has become one of Maduro’s most vocal critics. They additionally assert the assembly will dissolve those opposing branches of government and act as executor, legislator and judicial enforcer and could govern indefinitely.

There is increasing wariness of a government that has failed to ensure economic stability, has made non-transparent political decisions and has enabled the proliferation of corruption.  A growing number of Venezuelans who supported Hugo Chávez and his policies have distanced themselves from his successor, dismayed by the country’s turn from a once vibrant participatory democracy towards a closed one-party state, intolerant of critics.

But, there is waning support for the violent anti-government protests, which have become anarchical and deadly and appear to have no viable political objective beyond Maduro’s removal from power.  The opposition remains deeply divided without clear leadership or an alternative agenda that could resolve the severe crisis in the country.  Now, in the face of the government’s imposed constitutional rewrite, the opposition has moved to set up a parallel state. I am loath to accept these are Venezuela’s only options.

I believe there is still a chance to prevent a full on civil war in Venezuela, but concessions must be made by both sides, starting with a return to rule of law. In order for that to happen, government efforts to usurp the powers of the democratically-elected parliament and judicial maneuvering by the country’s highest court to silence critics should cease. Voices of moderation need to emerge without fear of being branded traitors or opportunists, as has been happening to anyone publicly criticizing the government or opposition. The opposition leadership and its international backers must immediately condemn all violence.  Use of molotov cocktails, homemade bombs and firearms are not forms of peaceful, democratic protest as most media have erroneously portrayed and even glamorized. Imagine if protestors were to use lethal weapons against security forces in the U.S., even killing some of them. In Venezuela, the anti-government protestors have even burned innocent bystanders to death because they suspected them of being “chavistas”. Were that to happen in the U.S., the repression and forceful action by the state would far exceed the leniency exercised by the Venezuelan government in the face of these deadly demonstrations. In no way would I ever justify repression or infringement on fundamental rights to assembly or freedom of expression, but in the case of Venezuela, most major media have inaccurately portrayed the reality. The millions of Venezuelans who actually support the government, or at least support the “chavista” movement and not the opposition, have largely been excluded and underrepresented from the reporting in most international media.

Washington continues to push for regime change in Venezuela. This has been a U.S. government policy since the failed coup against Chavez in 2002. Sanctions and threats of interventions from the United States and the Secretary General of the Organization of American States continue to further agitate the crisis instead of calming tensions and embolden the government to radicalize.  Foreign intervention is not the path to peace in Venezuela. Venezuelans alone must resolve their differences. The world does not need another war with a major oil producing nation that will most certainly cause the destruction of the country’s infrastructure, result in mass deaths and spiral the largely peaceful region of Latin America into a severe crisis of stability.

There is no way out of Venezuela’s crisis if all parties to the conflict don’t recognize and respect each other’s right to exist. This has been one of the principal obstacles the country has faced since the opposition attempted to undermine the Chavez administration through the U.S.-backed coup d’etat in 2002. The opposition must accept the legitimacy of President Maduro and his administration and allow him to fulfill his presidential term, which ends in 2019.   In return, the parliament should be allowed to assume its full mandate without further obstacles. Fair elections overseen by an independent electoral council should be held within the timeframe stipulated by law instead of being manipulated by political parties or foreign pressure. This includes holding long overdue regional elections for governors and mayors.

I fell in love with Venezuela because of the unbridled passion and joyful kindness of its people who cherish and celebrate living. There is still time for this Venezuela to prevail.

Eva Golinger is the author of The Chavez Code. She can be reached through her blog.