Brazilian president has dissolved Renca to attract investment in region thought to contain gold, with critics warning of irreversible damage. 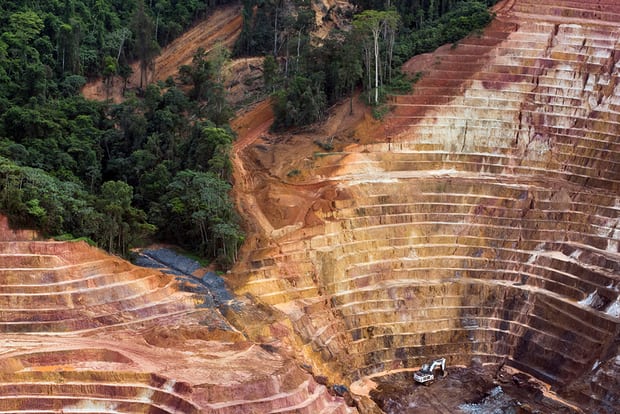 Critics fear the Renca reserve could suffer a similar fate as this land near the Parque Nacional Motanhas do Tumucumaque, Brazil, now home to a gold and iron mine.
Photograph: Daniel Beltra for Greenpeace

24 Aug 2017 – The Brazilian president Michel Temer has abolished an Amazonian reserve the size of Denmark, prompting concerns of an influx of mineral companies, road-builders and workers into the species-rich forest.

The dissolution of the Renca reserve – which spans 46,000 sq km on the border of the Amapa and Para states – was described by one opposition senator Randolfe Rodrigues of the Sustainability Network party, as the “biggest attack on the Amazon of the last 50 years”.

Conservationists said it will open the door for mining companies to enter Renca – the Portuguese acronym for the National Reserve of Copper and Associates – which was set up in 1984 and encompasses nine protected areas.

More than 20 domestic and multinational firms have expressed an interest in the region which is thought to contain deposits of gold, copper, tantalum, iron ore, nickel and manganese.

The government said the reserve is being abolished to attract foreign investment, improve exports and boost an economy that has been struggling to emerge from its deepest recession in decades.

It claimed the change of status would not affect conservation areas and indigenous territories in the region, but Amazon activists warned commercial exploitation by big companies in the past has been followed by illegal land grabbers, artisanal miners and road builders.

Christian Poirier of Amazon Watch said Temer’s decision had to be seen in the context of wider efforts by his government to erode protected areas, weaken environmental licensing, and diminish indigenous rights in the interests of wealthy supporters in the extractive industries.

“The abolition of Renca will wreak havoc on the forest and indigenous communities in the interests of the small group of economically powerful groups who are keeping Temer in power,” he said. “This is the largest assault so far in a package of threats.”

“A gold rush in the region will create irreversible damage to local cultures,” warned Mauricio Voivodic, executive director of WWF-Brazil. “In addition to demographic exploitation, deforestation, loss of biodiversity and water resources, this could lead to an intensification of land conflicts and threats to indigenous peoples and traditional populations.”

Since plotting the impeachment of his running mate Dilma Rousseff last year, Temer has moved rapidly to unravel environmental protections to please the powerful agricultural and mining lobbies. The only pause in this policy came earlier this year when Temer vetoed a bill that would have opened up swathes of forest to development. At the time, the president said he was responding to an appeal on Twitter by the supermodel, Gisele Bündchen.

But Temer has since approved several similar measures, including the latest one this week, which prompted an angry response from Bündchen. “SHAME! We are auctioning off our Amazon! We can’t destroy our protected areas for private interests,” she tweeted.

Ending land clearing would compete with renewables for carbon abatement, analysis finds – 31 May 2017