Commemorating Howard Zinn on His Birthday: “No Human Being Is Illegal”

The People’s Historian was born August 24, 1922.  We share a piece on immigration he published with us in our July 2006 issue—entirely relevant today. This article is adapted from the introduction Zinn wrote to Deepa Fernandes’s book, Targeted: Homeland Security and the Business of Immigration. Entirely relevant today.

No Human Being Is Illegal

23 Aug 2017 – Vigilantes sit at the border, guns on their laps, looking for those who might cross over. President Bush promises to send 6,000 National Guardsmen there and to build a wall. Archconservatives threaten to make felons out of the undocumented and those who help them. But immigrants from south of the border, along with their supporters, have been demonstrating, by the hundreds of thousands, for the rights of foreign-born people, whether here legally or illegally. There is a persistent sign: “No Human Being Is Illegal.”

Discrimination against the foreign born has a long history, going back to the beginning of the nation.

Ironically, having just gone through its own revolution, the United States was fearful of having revolutionaries in its midst. France had recently overthrown its monarchy. Irish rebels were protesting against British rule, and the new U.S. government was conscious of “dangerous foreigners”—Irish and French—in the country. In 1798, Congress passed legislation lengthening the residence requirement for becoming a citizen from five to fourteen years. It also authorized the President to deport any alien he regarded as dangerous to the public safety.

There was virulent anti-Irish sentiment in the 1840s and ’50s, especially after the failure of the potato crop in Ireland, which killed a million people and drove millions abroad, most of them to the United States. “No Irish Need Apply” symbolized this prejudice. It was part of that long train of irrational fear in which one generation of immigrants, now partly assimilated, reacts with hatred to the next. Take Irish-born Dennis Kearney, who became a spokesman for anti-Chinese prejudice. His political ambitions led him and the California Workingmen’s Party to adopt the slogan “The Chinese Must Go.”

The Chinese had been welcome in the 1860s as cheap labor for the building of the transcontinental railroad, but now they were seen, especially after the economic crisis of 1873, as taking away jobs from the native born. This sentiment was turned into law with the Chinese Exclusion Act of 1882, which, for the first time in the nation’s history, created the category of “illegal” immigrants. Before this, there was no border control. Now Chinese, desperate to change their lives, tried to evade the act by crossing over from Mexico. Some learned to say “Yo soy Mexicano.” But violence against them continued, as whites, seeing their jobs go to ill-paid Chinese, reacted with fury. In Rock Springs, Wyoming, in the summer of 1885, whites attacked 500 Chinese miners, massacring twenty-eight of them in cold blood.

In the East, Europeans were needed to work in the garment factories, the mines, the textile mills, or as laborers, stonecutters, ditch diggers. The immigrants poured in from Southern and Eastern Europe, from Italy, Greece, Poland, Russia, and the Balkans. There were five million immigrants in the 1880s, four million in the 1890s. From 1900 to 1910, eight million more arrived.

These newcomers faced vicious hostility. A typical comment in the Baltimore Sun: “The Italian immigrant would be no more objectionable than some others were it not for his singularly bloodthirsty disposition, and frightful temper and vindictiveness.” New York City’s Police Commissioner Theodore Bingham insisted that “half of the criminals” in New York City in 1908 were Jews.

Woodrow Wilson’s decision to bring the United States into the First World War brought widespread opposition. To suppress this, the government adopted legislation—the Espionage Act, the Sedition Act— which led to the imprisonment of almost a thousand people. Their crime was to protest, by speech or writing, U.S. entrance into the war. Another law provided for the deportation of aliens who opposed organized government or advocated the destruction of property.

After the war, the lingering superpatriotic atmosphere led to more hysteria against the foreign born, intensified by the Bolshevik Revolution of 1917. In 1919, after the explosion of a bomb in front of the house of Attorney General A. Mitchell Palmer, a series of raids were carried out against immigrants. Palmer’s agents picked up 249 noncitizens of Russian birth, many of whom had lived in this country a long time, put them on a transport, and deported them to Soviet Russia. Among them were the anarchists Emma Goldman and Alexander Berkman. J. Edgar Hoover, at that time a young agent of the Department of Justice, personally supervised the deportations.

Shortly after, in January 1920, 4,000 persons in thirty-three cities were rounded up and held in seclusion for long periods of time. They were brought into secret hearings, and more than 500 of them were deported. In Boston, Department of Justice agents, aided by local police, arrested 600 people by raiding meeting halls or by invading their homes in the early morning. They were handcuffed, chained together, and marched through the city streets. It was in this atmosphere of jingoism and anti-foreign hysteria that the Italian immigrants Nicola Sacco and Bartolomeo Vanzetti were put on trial after a robbery and murder at a Massachusetts shoe factory, found guilty by an Anglo-Saxon judge and jury, and sentenced to death.

With the increased nationalist and anti-foreign sentiment, Congress in 1924 passed a National Origins Quota Act. This set quotas that encouraged immigration from England, Germany, and Scandinavia but strictly limited immigration from Eastern and Southern Europe.

Following World War II, the Cold War atmosphere of anti-communist hysteria brought about the McCarran-Walter Act of 1952, which set quotas of 100 immigrants for each country in Asia. Immigrants from the United Kingdom, Ireland, and Germany could take up 70 percent of the annual immigration quota. The act also revived, in a virulent way, the antialien legislation of 1798, creating ideological grounds for the exclusion of immigrants and the treatment of all foreign-born residents, who could be deported for any “activities prejudicial to the public interest” or “subversive to national security.” Noncitizens suspected of radical ideas were rounded up and deported.

The great social movements of the Sixties led to a number of legislative reforms: voting rights for African Americans, health care for senior citizens and for the poor, and a law abolishing the National Origins Quota system and allowing 20,000 immigrants from every country.

But the respite did not last.

In 1995, the federal building in Oklahoma City was bombed, with the deaths of 168 people. Although the two men convicted of the crime were native-born Americans, the following year President Bill Clinton signed into law the Antiterrorism and Effective Death Penalty Act, which contained especially harsh provisions for foreign-born people. For immigrants as well as for citizens, the act reintroduced the McCarthy-era principle of guilt by association. That is, people could be put in jail—or, if foreign born, deported—not for what they actually did, but for giving support to any group designated as “terrorist” by the Secretary of State. The government could deny visas to people wanting to enter the United States if they were members of any such group, even if the actions of the group supported by the individual were perfectly legal. Under the new law, a person marked for deportation had no rights of due process, and could be deported on the basis of secret evidence.

Clinton’s signing of this act reaffirmed that the targeting of immigrants and depriving them of constitutional rights were not policies simply of the Republican Party but also of the Democratic Party, which in the military atmosphere of World War I and the Cold War had joined a bipartisan attack on the rights of both native and foreign born.

In the wake of the destruction of the Twin Towers in New York on September 11, 2001, President George Bush declared a “war on terrorism.” A climate of fear spread across the nation, in which many foreign-born persons became objects of suspicion. The government was now armed with new legal powers by the so-called Patriot Act of 2001, which gave the Attorney General the power to imprison any foreign-born person he declared a “suspected terrorist.” He need not show proof; it all depends on his say-so. And such detained persons may be held indefinitely, with no burden of proof on the government and no hearing required. The act was passed with overwhelming Democratic and Republican support. In the Senate, only one person, Russ Feingold of Wisconsin, voted against it.

In the excited atmosphere created by the “war on terrorism,” it was predictable that there would follow violence against foreign-born people. For instance, just four days after the 9/11 events, a forty-nine-year-old Sikh American who was doing landscaping work outside his gas station in Mesa, Arizona, was shot and killed by a man shouting, “I stand for America all the way.” In February 2003, a group of teenagers in Orange County, California, attacked Rashid Alam, an eighteen-year-old Lebanese American, with bats and golf clubs. He suffered a broken jaw, stab wounds, and head injuries.

Shortly after 9/11, as documented by the Center for Constitutional Rights and Human Rights Watch, Muslims from various countries were picked up, held for various periods of time in tiny, windowless cells, often beaten and abused. As The New York Times reported, “Hundreds of noncitizens were swept up on visa violations in the weeks after 9/11, held for months in a much-criticized federal detention center in Brooklyn as ‘persons of interest’ to terror investigators, and then deported.”

Muslims became a special target of surveillance and arrest. Thousands were detained. New York Times columnist Anthony Lewis told of one man, who, even before September 11, was arrested on secret evidence. When a federal judge found there was no reason to conclude the man was a threat to national security, the man was released. However, after September 11, the Department of Justice, ignoring the judge’s finding, imprisoned him again, holding him in solitary confinement twenty-three hours a day, not allowing his family to see him.

As I write this, Republicans and Democrats are trying to work out a compromise on the rights of immigrants. But in none of these proposals is there a recognition that immigrants deserve the same rights as everyone else. Forgetting, or rather, ignoring the indignation of liberty-loving people at the building of the Berlin Wall, and the exultation that greeted its fall, there will be a wall built at the southern borders of California and Arizona. I doubt that any national political figure will point out that this wall is intended to keep Mexicans out of the land that was violently taken from Mexico in the War of 1846-1848.

Only the demonstrators in cities across the country are reminding us of the words on the Statue of Liberty in New York harbor: “Give me your tired, your poor, your huddled masses yearning to breathe free, the wretched refuse of your teeming shore. Send these, the homeless, tempest-tossed, to me. I lift my lamp beside the golden door.” In the wave of anger against government action in the Sixties, cartoons were drawn showing the Statue of Liberty blindfolded. The blindfolds remain, if only symbolically, until we begin to act, yes, as if “No Human Being Is Illegal.” 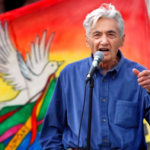 Howard Zinn (Aug 24, 1922 – Jan 27, 2010) was an American historian, playwright, and social activist. He was a political science professor at Boston University. Zinn wrote more than twenty books, including his best-selling and influential A People’s History of the United States. In 2007, he published a version of it for younger readers, A Young People′s History of the United States. Zinn described himself as “something of an anarchist, something of a socialist. Maybe a democratic socialist.” He wrote extensively about the civil rights and anti-war movements, and labor history of the United States. His memoir, You Can’t Be Neutral on a Moving Train, was also the title of a 2004 documentary about Zinn’s life and work. Zinn died of a heart attack in 2010, aged 87. (Wikipedia)