After 30 Years, Gazans Go to the Movies for One Night Only

The film which debuted Saturday [26 Aug] at the Samer Cinema was shot in Gaza with a team of volunteer actors. 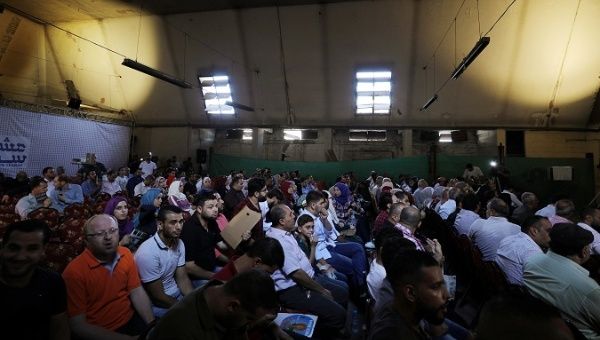 27 Aug 2017 – After 30 long years and for one night only, the oldest theater in Gaza open its doors to Palestinians of all ages Saturday for a special screening of a film documenting the lives of Palestinian prisoners held in Israeli jails.

Some 300 people crammed into the hot and crowded cinema, which had been abandoned for decades.

“We need to live like humans, with cinemas, public spaces and parks,” said audience member Jawdat abu Ramadan, a resident of Gaza City which has been under an Israeli blockade since 2007, along with the rest of the Gaza Strip.

The blockade includes a land, sea and air siege on the two million Palestinians in the Israeli occupied territory, where there are no current operational theaters.

The event at the Samer Cinema was characterized by one of the organizers, Ghada Salmi, as a symbol of a broader attempt to bring cinema back to Gaza. The theater was built in 1944, but closed in the 1960s, with the other theaters closing during the first Palestinian Intifada of the late 1980s.

The debut of the film, “10 Years,” which was shot in Gaza with a team of volunteer actors, concentrates on the personal, human stories of the prisoners, according to Salmi, rather than tackling the complex history of the Israeli-Palestinian conflict.

RELATED: Voices of the Palestinian Diaspora: Baroud, Najjar on Identity and Resistance

Actor Nermin Ziari stated he believed that “society needs to develop through films and documentaries,” adding that he hopes to see more cinemas reopen around the city.

On occasion, a film is shown in a rented hall in Gaza, with a human rights film festival in May, where films were shown at the Gaza City seaport in an outdoor event.