3 Sep 2017 – More than 2,600 houses have been burned down in Rohingya-majority areas of Myanmar’s restive northwest in the last week, as tens of thousands more refugees fled into Bangladesh over the past 24 hours.

Myanmar officials blamed the Arakan Rohingya Salvation Army (ARSA) for the torching of homes in Rakhine State. Hundreds of people have been killed since the recent eruption of violence.

“A total of 2,625 houses from Kotankauk, Myinlut and Kyikanpyin villages and two wards in Maungtaw were burned down by the ARSA extremist terrorists,” the state-run Global New Light of Myanmar said.

But civilians fleeing the country accused soldiers of a scorched-earth policy.

“Our house was torched by the military… We tried to flee towards the mountain but they shot dead my two children along with their mother. I managed to escape with my other kids,” said Rohingya refugee Jamal Hossain.

“New satellite imagery shows the total destruction of a Muslim village and prompts serious concerns that the level of devastation in northern Rakhine State may be far worse than originally thought,” said Phil Robertson, the group’s deputy Asia director.

Jalal Ahmed, 60, who arrived in Bangladesh on Friday with a group of about 3,000 after walking from Kyikanpyin for almost a week, said he believed the Rohingya were being pushed out of Myanmar.

“The military came with 200 people to the village and started fires… All the houses in my village are already destroyed. If we go back there and the army sees us, they will shoot,” he said.

READ MORE: Who are the Rohingya Muslims?

Near the Naf river separating Myanmar and Bangladesh, new arrivals in Bangladesh carrying their belongings in sacks set up crude tents or tried to squeeze into available shelters or homes of locals.

According to UN sources, nearly 60,000 Rohingya have crossed the border into Bangladesh, with an additional 10,000 trapped in no-man’s land.

Vivian Tan, UNHCR regional spokeswoman, told Al Jazeera from the Cox’s Bazar region in Bangladesh that refugee camps in the country were at “breaking point”.

“The existing refugees have really stepped up and provided support, mobilised community kitchens, opened their homes,” she said. “But these camps are filling up really fast and they are reaching breaking point.”

Aid workers expect more people to cross the border than during the crisis in the fall of last year, when more than 70,000 people made the journey. 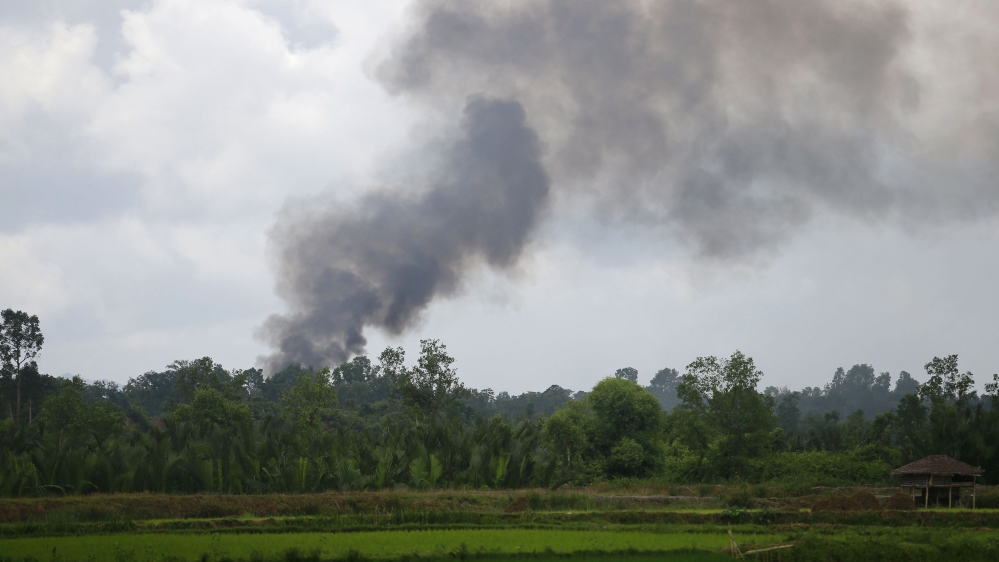 The treatment of Myanmar’s roughly 1.1 million Rohingya is the biggest challenge facing leader Aung San Suu Kyi, accused by critics of not speaking out for the Muslim minority that has long complained of persecution.

“Until or unless she and the military are able to see a peace process in Rakhine State as encompassing more than a military solution, we are likely to see more of what we’ve seen this past week.”

The Rohingya are denied citizenship in Myanmar and regarded as illegal immigrants, despite claiming roots that date back centuries.

Bangladesh is also growing increasingly hostile to Rohingya with more than 400,000 of whom live in the poor South Asian country after fleeing Myanmar since the early 1990s.

Speaking to soldiers, government staff, and Rakhine Buddhists affected by the conflict on Friday, army chief Min Aung Hlaing said there is no “oppression or intimidation” against the Muslim minority and “everything is within the framework of the law”.

“The Bengali problem was a long-standing one which has become an unfinished job,” he said, using a term to refer to the Rohingya that suggests they come from Bangladesh.