BRICS Is Being Battered by Global Crises: Why This Might Not Be a Bad Thing

30 Aug 2017 – That was the theory, but the economic reality of the once-feted Brazil-Russia-India-China-South Africa alliance is contradictory.

Instead of centripetal strengthening, the world is witnessing much more powerful centrifugal dividing forces, including overproduction, over-indebtedness and deglobalisation of capital. These elements have been spinning out of control even before the chaotic era of US President Donald Trump began.

Over production is mostly found in the coal, steel, non-ferrous metals, cement and chemicals industries. It’s largely driven from China where over-capacity is more than 30%, according to a new International Monetary Fund report that also raised worries about the country’s vast debt.

Over borrowing by companies, states and households represents a global crisis in the making. The Institute of International Finance has just reported that world debt is now USD$217 trillion (327% of world GDP), up from USD$149 billion (276%) in 2007.

Deglobalisation is simply the reversal – mostly since 2008 – of prior rapid growth in cross-border trade, investment and finance. Should that be viewed as a bad thing? Rather than fear globalisation’s unravelling, leading scholar-activists including Samir Amin in Africa, the late Ruy Mauro Marini in Latin America, Walden Bello in Asia and the 20th century’s most important economist, John Maynard Keynes, have all advocated national economic sovereignty. If pursued cleverly, deglobalisation could be the basis for restoring links between once vibrant sectors subsequently destroyed by imports.

Could BRICS leaders evolve in this direction? Their summit next week will be distracted by geopolitical tensions. Although a welcome deal on Monday prevents the feared Sino-Indian border war, a much more durable geo-economic battle is unfolding in the China-Pakistan Economic Corridor, which in May left Prime Minister Narendra Modi boycotting China’s Belt and Road mega-conference three months ago.

Beijing’s BRICS logo designers, perhaps being unconsciously subversive, have illustrated how the once overlapping, interlocking BRICS are now being wedged apart as paper thin subjects of centrifugal forces. For Africa, fewer illusions in these economies would be welcome, given how exploitative the BRICS and their firms have become against societies, democratic movements and environments. 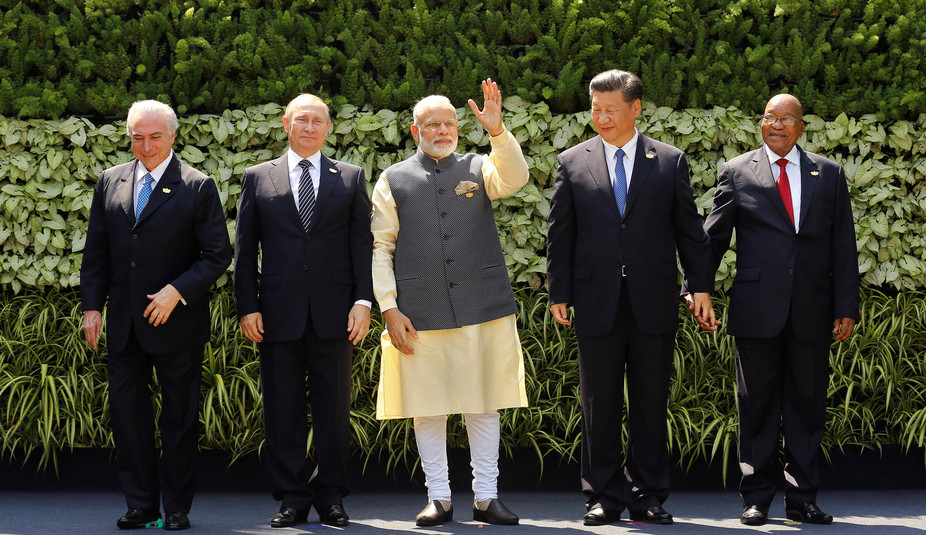 The leaders of the Brazil-Russia-India-China-South Africa alliance. REUTERS/Danish Siddiqui

A counter-summit challenges the BRICS

This argument is made by the Hong Kong People’s Forum, initiated by the city’s progressive labour, intellectual and faith leaders to question the BRICS. Their meeting this weekend follows in the counter summit traditions of the 2013 brics-from-below in Durban, the 2014 Dialogue on Development in Fortaleza, and the 2016 Goa People’s Forum on BRICS.

According to the Hong Kong People’s Forum:

Instead of offering an alternative, the BRICS actually offer a continuation of neo-liberalism. On top of BRICS there is also China’s new mega project, the Belt and Road initiative whose main purpose is to export China’s surplus capital.

These surpluses are vast, as witnessed in China’s foreign reserves which recently topped USD$4 trillion, though then fell 20% due to bouts of capital flight and two stock market crashes in 2015-16.

Global trade, finance and investment were meant to be the motors for the advancement of BRICS. But according to the World Bank, global trade peaked at 61% of world gross domestic product (GDP) in 2008 but retreated to 58% in 2015.

On top of this, the ratio of world financial assets that are held overseas compared to GDP fell from 58% in 2008 to 38% in 2016, even as overall financial assets increased in line with soaring debt.

Finally, another deglobalisation symptom is the halving of relative global foreign direct investment: from 3.7% of world GDP in 2008 to 1.7% in 2016.

Leading financiers now talk of an imminent world recession, given over priced stock markets and corporate debt. This is not just due to wild New York share speculation, as also occurred before the crashes of 1987, 2000 and 2008. Three BRICS stock markets are also bubbling: South Africa’s stock market is 90% higher than in 2010, India’s market is up 70% and Russia has risen by 50%.

These dangerous centrifugal forces cannot be easily regulated or reversed. The only recent relief came from the Chinese state’s massive urban construction investments (albeit leaving scores of near-empty cities) and the Indian service sector boom. But since 2015 the other three BRICS have suffered recessions as the crash in commodity prices hit home.

China has now evolved into a global engine promoting a neo-liberal agenda from free trade agreements to corporate led integration across borders.

The BRICS had promised to challenge an unfair global economic system. But in December 2015 their main multilateral reform strategies failed:

Adds the Hong Kong People’s Forum: “The 2017 World Economic Forum in Davos was one site where Xi clearly took the lead in promoting world corporate power, as Trump leads the US-UK retreat into crony-capitalist protectionism.”

South African President Jacob Zuma pronounced last month at his party’s policy congress, “The ANC is part of the global anti-imperialist movement. We are historically connected with the countries of the South and therefore South-South cooperation such as BRICS is primary for our movement.”

Patrick Bond – Professor of Political Economy, University of the Witwatersrand