How to Make Fun of Nazis 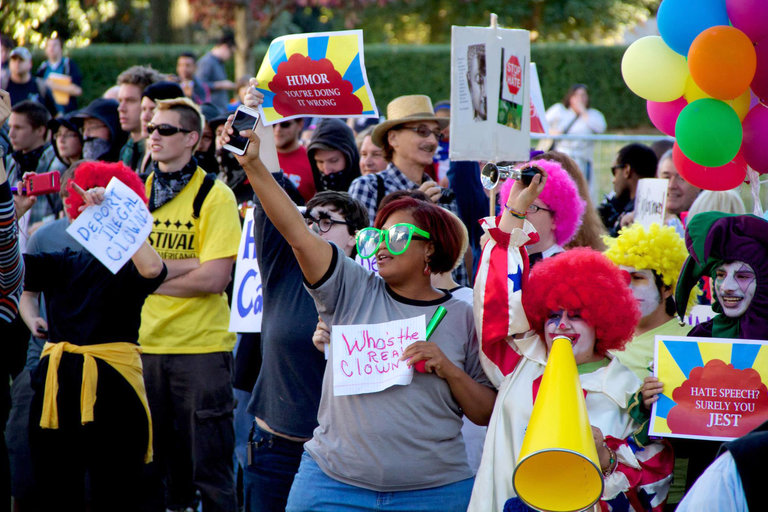 17 Aug 2017 – For decades, Wunsiedel, a German town near the Czech border, has struggled with a parade of unwanted visitors. It was the original burial place of one of Adolf Hitler’s deputies, a man named Rudolf Hess. And every year, to residents’ chagrin, neo-Nazis marched to his grave site. The town had staged counterdemonstrations to dissuade these pilgrims. In 2011 it had exhumed Hess’s body and even removed his grave stone. But undeterred, the neo-Nazis returned. So in 2014, the town tried a different tactic: humorous subversion.

The campaign, called Rechts Gegen Rechts — the Right Against the Right — turned the march into Germany’s “most involuntary walkathon.” For every meter the neo-Nazis marched, local residents and businesses pledged to donate 10 euros (then equivalent to about $12.50) to a program that helps people leave right-wing extremist groups, called EXIT Deutschland.

They turned the march into a mock sporting event. Someone stenciled onto the street “start,” a halfway mark and a finish line, as if it were a race. Colorful signs with silly slogans festooned the route. “If only the Führer knew!” read one. “Mein Mampf!” (my munch) read another that hung over a table of bananas. A sign at the end of the route thanked the marchers for their contribution to the anti-Nazi cause — €10,000 (close to $12,000). And someone showered the marchers with rainbow confetti at the finish line.

The approach has spread to several other German towns and one in Sweden (where it was billed as Nazis Against Nazis).

This week, following the violence in Charlottesville, Va., Wunsiedel has come back into the news. Experts in nonviolent protest say it could serve as a model for Americans alarmed by the resurgent white supremacist movement who are looking for an effective way to respond (and who might otherwise be tempted to meet violence with violence). Those I spoke with appreciated the sentiment of the antifa, or anti-fascist, demonstrators who showed up in Charlottesville, members of an anti-racist group with militant and anarchist roots who are willing to fight people they consider fascists. “I would want to punch a Nazi in the nose, too,” Maria Stephan, a program director at the United States Institute of Peace, told me. “But there’s a difference between a therapeutic and strategic response.”

The problem, she said, is that violence is simply bad strategy.

Violence directed at white nationalists only fuels their narrative of victimhood — of a hounded, soon-to-be-minority who can’t exercise their rights to free speech without getting pummeled. It also probably helps them recruit. And more broadly, if violence against minorities is what you find repugnant in neo-Nazi rhetoric, then “you are using the very force you’re trying to overcome,” Michael Nagler, the founder of the Peace and Conflict Studies program at the University of California, Berkeley, told me.

Most important perhaps, violence is just not as effective as nonviolence. In their 2011 book, “Why Civil Resistance Works,” Dr. Stephan and Erica Chenoweth examined how struggles are won. They found that in over 320 conflicts between 1900 and 2006, nonviolent resistance was more than twice as effective as violent resistance in achieving change. And nonviolent struggles were resolved much sooner than violent ones.

The main reason, Dr. Stephan explained to me, was that nonviolent struggles attracted more allies more quickly. Violent struggles, on the other hand, often repelled people and dragged on for years.

Their findings highlight what we probably already intuit about protest: It’s a performance not just for the people you may be protesting against but also for everyone else who may be persuaded to join your side.

Take the American civil rights movement. Part of what moved the country toward the Civil Rights Act of 1964 were the images, broadcast to the entire country, of steadfastly nonviolent protesters, including women and occasionally children, being beaten, hosed and abused by white policemen and mobs.

Those images also highlight two points emphasized by Stephanie Van Hook, the executive director of the Metta Center for Nonviolence. First, nonviolence is a discipline, and as with any discipline, you need to practice to master it. Nonviolence training was a fixture of the movement. Even the Rev. Dr. Martin Luther King Jr. and his companions rehearsed in basements, role playing and insulting one another to prepare for what was to come.

And second, sometimes being on the receiving end of violence is the whole point. That’s how you expose the hypocrisy and rot you’re struggling against. They attack unprovoked. You don’t counterattack. You’re hurt. The world sees. Hearts change. It takes tremendous courage: Your body ends up being the canvas that bears the evidence of the violence you’re fighting against.

But ideally, of course, we’d avoid violence altogether. This is where the sort of planning on display at Wunsiedel is key. Humor is a particularly powerful tool — to avoid escalation, to highlight the absurdity of absurd positions and to deflate the puffery that, to the weak-minded at any rate, might resemble heroic purpose.

Germany is not America. For one, neo-Nazis aren’t allowed to carry assault rifles through the streets there, let alone display swastikas. But we do have similar examples of humor being used to counteract fascists in the United States. In 2012, a “white power” march in Charlotte, N.C., was met with counterprotesters dressed as clowns. They held signs reading “wife power” and threw “white flour” into the air.

“The message from us is, ‘You look silly,’ ” a coordinator told the local news channel. “We’re dressed like clowns, and you’re the ones that look funny.”

By undercutting the gravitas white supremacists are trying to accrue, humorous counterprotests may blunt the events’ usefulness for recruitment. Brawling with bandanna-clad antifas may seem romantic to some disaffected young men, but being mocked by clowns? Probably not so much.

Which brings us to Charlottesville, and the far right rallies that will surely follow. To those wondering how to respond, Dr. Stephan says that “nonviolent movements succeed because they invite mass participation.” Humor can do that; violence less so.

The broader issue, in her view, is this: Why do oppressive regimes and movements invest so much in fomenting violence? (Think of our president and his talent for dividing the country and generating chaos.) Because violence and discord help their cause. So why would you, she asks, “do what the oppressor wants you to do?”

Moises Velasquez-Manoff, the author of An Epidemic of Absence: A New Way of Understanding Allergies and Autoimmune Disease, is a contributing opinion writer.

This article was updated to reflect news developments.

An earlier version of this essay misstated Rudolf Hess’s ties to the town of Wunsiedel. He was only buried there; he was not born there.

A version of this op-ed appears in print on August 20, 2017, on Page SR11 of the New York edition with the headline: How to Make Fun Of Fascists.