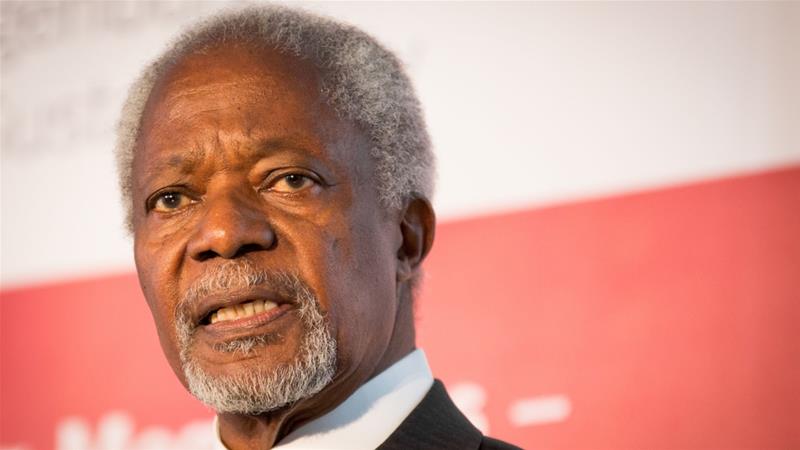 24 Aug 2017 – Myanmar must scrap restrictions on movement and citizenship for its persecuted Muslim Rohingya minority if it wants to avoid fuelling extremism and bring peace to Rakhine state, a commission led by former UN chief Kofi Annan said today.

Rights groups hailed the report as a milestone for the Rohingya because the government of Aung San Suu Kyi has previously vowed to abide by its findings.

The mistreatment of approximately 1.1 million Rohingya has emerged as Myanmar’s most contentious human rights issue as it makes a transition from decades of military rule.

Annan was appointed by state counsellor Aung San Suu Kyi to head a year-long commission tasked with healing long-simmering divisions between the Rohingya and Buddhists in the western state, which is one of the poorest in the country.

“Unless current challenges are addressed promptly, further radicalisation within both communities is a real risk,” the nine-member commission said in its final report, describing the Rohingya as “the single biggest stateless community in the world”.

“If the legitimate grievances of local populations are ignored, they will become more vulnerable to recruitment by extremists,” the report added.

Security deteriorated sharply in the state on the border with Bangladesh last October after nine policemen were killed by suspected Rohingya militia in attacks on border posts.

In response, the Myanmar military sent troops fanning out into Rohingya villages in an offensive beset by allegations of arson, killings and rape by the security forces, and which sent 87,000 Rohingya fleeing to Bangladesh.

The situation in the state deteriorated again this month when security forces began a new “clearance operation” with tension shifting to a township, Rathetaung, where Buddhist Rakhine and Rohingya communities live side-by-side.

“While Myanmar has every right to defend its own territory, a highly militarised response is unlikely to bring peace to the area,” the report said.

The commission warned that if human rights were not respected and “the population remain politically and economically marginalised – northern Rakhine State may provide fertile ground for radicalisation, as local communities may become increasingly vulnerable to recruitment by extremists”.

The Rohingya are denied citizenship and classified as illegal immigrants from Bangladesh, despite claiming roots in the region that go back centuries, with communities marginalised and occasionally subjected to communal violence.

Annan has visited Myanmar three times since his appointment, including two trips to Rakhine State. On Thursday, he presented his findings to Suu Kyi and army chief Min Aung Hlaing.

The United Nations said in a report in February security forces had instigated a campaign that “very likely” amounted to crimes against humanity and possibly ethnic cleansing.

That led to the establishment of a UN fact-finding mission a month later. But Myanmar’s domestic investigation team criticised the UN report this month and rejected allegations of abuses.

Myanmar declined to grant visas to three experts appointed by the United Nations and instead the government said Myanmar would comply with recommendations by the Annan team.

But Annan’s panel – which has a broad mandate to look into, among other things, long-term economic development, education and healthcare in the state – said it was “not mandated to investigate specific cases of alleged human rights violations”.

Rights groups welcomed the report, saying its recommendations tallied with what they had long argued for.

“These apartheid-like restrictions drive communities apart rather than together, eroding security and heightening the risk of mass killing,” said Matthew Smith, from Fortify Rights.

“Myanmar needs to throw its full weight behind these recommendations, and especially not blink in dealing with the harder stuff,” he said.

Amnesty International’s James Gomez, the director of Southeast Asia and the Pacific, said “without concrete action by the authorities to address long-standing grievances and redress decades of violations, people in the region will continue to be trapped in a cycle of deprivation and abuse”.

“They must urgently lift restrictions on movement, allow full access for humanitarian workers and media, and review and amend the country’s discriminatory citizenship laws,” he said.