13 Sep 2017 – I am republishing in modified form a short tribute to the memory of Ebrahim Yazdi. My original text, including its Arab translation, can be found at this link– http://tarikhirani.ir/fa/files/112/bodyView/1098.

I had the privilege of knowing Dr. Yazdi, a pharmologist living in Houston until the Iranian Revolution of 1978-79, for the last 35 years of his life. A close associate of Ayatollah Khomeini, Dr. Yazdi became Foreign Minister in the Interim Government established immediately after the revolution succeeded, but resigned following the seizure of the American Embassy in November 1979, the point at which the Iranian revolution was dramatically radicalized and theocratized. For the remainder of his life, although remaining a devout Muslim, Dr. Yazdi struggled on behalf of constitutional democracy within the frame of the Islamic Republic of Iran. For these activities he was eventually sentenced to eight years in prison, and released a few years ago for health reasons.

More importantly, as my essay tries to highlight, Dr. Yazdi believed that despite the formal theocratic trappings, the democratic spirit continued to flourish among the Iranian people, and was indeed gradually transforming the Iranian state from within and below. Such a perception is especially important as this positive development has been put at serious risk by the Netanyahu, Salmon, Trump confrontational and warmongering diplomacy that strengthens the hand of hardliners within Iran and correspondingly weakens the positions of those continuing Dr. Yazdi’s brave struggle for a pluralist, tolerant, and progressive future with normalized relations with neighbors and the world. 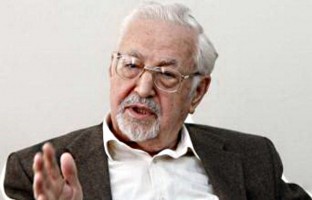 For all those dedicated to the attainment of real democracy, the name and life of Ebrahim Yazdi is a precious legacy worth reflecting upon because it has so much to teach us today. Among those who struggled for an Iranian future that was Islamic, genuinely democratic, and humanly decent no one was more steadfast and clear about their commitment than Dr. Yazdi. He participated in the revolution that overthrew the Shah long before its victory was achieved, and yet he vigorously opposed the radicalizing tendencies that led to the take over of the Iranian governing process at the time of the seizure of the American Embassy in Tehran in November 1979.

I first met Dr. Yazdi in the middle of 1978 when he led a group of student activists at an event organized at Princeton University where I was a faculty member. It was my first encounter with the religious wing of the overseas movement opposed to the Shah. I had been previously supportive of those opposing the American interference in the internal affairs of Iran, a reality that existed ever since 1953 when the CIA played such a major role in the overthrow of the elected government of Mohammad Mosaddeq. Until meeting with Dr. Yazdi I had not adequately appreciated the role of Ayatollah Khomeini as the real leader of this extraordinary nonviolent revolution unfolding in Iran that seemed to be growing stronger each day.

Some months later I had the opportunity to meet Ayatollah Khomeini in Paris, and was impressed at the time by his seeming commitment to resume a religious life and let post-Shah Iran be run in Tehran by political figures dedicated to establishing a humane relationship between the Iranian state and its people. I was struck by the degree to which the moderate views of Dr. Yazdi seemed also to inform the outlook of Ayatollah Khomeini, as well as Mehdi Bazargan, who had been my host during a political visit to in the midst of the climactic phase of the revolution in Iran and just prior to the meeting in Paris.

Dr. Yazdi was an early supporter of Khomeini’s leadership and encouraged a post-Shah governing process that would be guided by a strong constitution and led by officials selected by the people in fully free elections. However, this moderate vision of the Islamic Republic of Iran was opposed all along by various hardline elements in the Khomeini entourage, while this spiritual leader’s attitude seemed unformed when it came to the post-revolutionary governing process. The views of Dr. Yazdi seemed to win out at first as reflected by the character of the Interim Government, but gradually lost out, being decisively rejected after the embassy seizure that led to Dr, Yazdi’s resignation as Foreign Minister and Deputy Prime Minister of the Interim Government that had been earlier appointed by Khomeini to run the country immediately after the revolutionary victory and until elections could be organized.

No one has yet clarified whether Dr. Yazdi was correct in thinking that Khomeini was undecided as to how post-Shah Iran should be governed until around the time of the hostage seizure, which had been provoked by the Shah’s admission to the U.S. supposedly for medical treatment, although others suspected Washington’s counterrevolutionary intentions. Reading his lectures on the governance of an Islamic republic gave one sense, his early tendency to surround himself with secular liberal political figures in Europe and America created a different impression. I had several intelligent friends who were strong supporters of Khomeini’s leadership at first who became disenchanted later on, and chose exile or endured imprisonment and severe alienation. Dr. Yazdi never chose the path of disenchantment and alienation.

Rather than withdraw from the political arena after removing himself from a position of governmental authority, Dr. Yazdi entered the opposition, forming a political party, the Freedom Movement of Iran, which was dedicated to the democratizing of Iran by legal means. He even sought the presidency as the party’s candidate in 2005. It is a tribute to Dr. Yazdi’s courage and perseverance that he never lost faith in this democratizing mission, and believed that despite all the adverse Western criticisms of the Iranian government, the people of Iran were increasingly learning, and even practicing, the true virtues of democracy, and more significantly, that this pattern of practice was slowly but surely transforming the reality of the Islamic Republic of Iran in desirable directions.

It is this faith in the Iranian people and the related conviction that democracy, if it is to take root, must be grown and nurtured from within a country and in harmony with its distinctive political culture that is the core belief of Dr. Yazdi. As such, Dr. Yazdi’s view clashed with America’s ‘international liberalism’ that acted as if democracy could be imposed from without, a position that reached its disastrous climax by the attack on and occupation of Iraq after 2003, an intervention partially justified under the banner of ‘democracy promotion.’

Dr. Yazdi was sentenced to prison by a military court during the Shah’s rule for anti-government activity and then imprisoned in Iran under similar charges, being released only after an international campaign appealed to Iranian authorities on grounds of health. The legacy that Dr. Yazdi leaves behind is the profound political message that not only can an Islamic orientation toward governance be combined with democratic pluralism, tolerance, constitutionalism and a receptivity to all that modernity has to offer, but that is must be so combined if humane governance is to be achieved for Iran and other countries seeking to embed the best of their political culture and religious traditions in their political institutions.

A crucial part of this message, which few have so far grasped in the West, is that this process of democratization is presently being realized by the Iranian people and many of their leaders despite many past mistakes and in the face of criminal abuses by the regime, and that democracy can arise unexpectantly when a convergence of ethics, religion, and politics takes place.

Dr. Yazdi’s way of interpreting Iranian developments is being dangerously obscured in the West by the current aggressive postures adopted and inflammatory propaganda disseminated by Israel, Saudi Arabia, and the United States. We who wish for peace and justice can only hope that Dr. Yazdi’s vision comes to prevail in Iran and is respected by the world, and especially by the United States. Although his lifelong preoccupation was Iran, Dr. Yazdi’s deep engagement with democracy has universal applicability, and never more than now, and not only in the Islamic world, but wherever people seek to live together in a spirit of mutual respect and understanding, somewhat along the lines that Jacques Derrida had in mind when he spoke of ‘democracy to come.’