The Guardian View on the Slaughter in Myanmar: A Crime against Humanity

The brutal, bloody, and ultimately pointless mistreatment of a Muslim minority shames [Nobel Peace Laureate] Aung San Suu Kyi who appeared for decades as the epitome of principled and unflinching defence of human rights, now the unfeeling figurehead of a vicious regime. 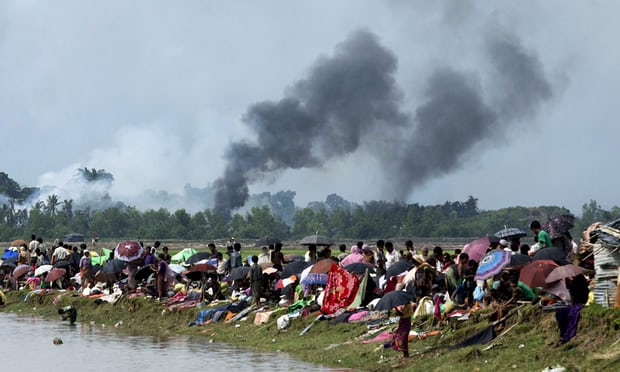 Smoke billows above what is believed to be a burning village in Rakhine state as Rohingya take shelter in a no-man’s land between Bangladesh and Myanmar. Photograph: KM Asad/AFP/Getty Images

4 Sep 2017 – The Rohingya are a Muslim people living in the north-west of predominantly Buddhist Myanmar, which borders mainly Muslim Bangladesh. In Myanmar they are seen as Muslims, and in Bangladesh as foreigners. Neither country claims or even wants them. Neither will allow them citizenship, though these families have lived in Burma for centuries at least. Now the military in Myanmar will not even tolerate their existence, and in recent weeks the almost genocidal pressure on their villages has greatly increased, sending tens of thousands trying to flee across a guarded border into an uncertain future. The army appears to be trying to starve out the population from areas where the armed resistance is most active, sending an unprecedented flood of refugees across the border. It has blocked UN agencies from delivering food, water or medicine to the affected areas, leaving an estimated 250,000 people without regular access to food.

There is very little for the refugees if they do get out alive. The Bangladeshi authorities are extremely reluctant to recognise that they are fleeing from persecution, even if local people have responded with great generosity.

For years Myanmar government forces have descended on villages to slaughter or drive out their inhabitants. Amnesty International has accused the regime of crimes against humanity. One of Myanmar’s most influential Buddhist preachers, Ashin Wirathu, preaches compassion towards mosquitoes but death for Muslims. Although he has served time in prison for earlier sermons, he is now more popular than ever, and widely believed to have the support of the army, which ruled the country openly for years and is still a powerful force behind the scenes.

The persecution has, predictably, led to an armed resistance, which, just as predictably, has provoked greater repression and cruelty. The Buddha had something to say about such chains of violence and revenge but it appears that the Myanmar’s Buddhists would rather use chains as weapons, the way Hells Angels did, than be freed from them. This story would be tragic and an outrage to the conscience of the world if it ended there. But there is every chance it will not. There is no repression savage enough to empty the whole of Rakhine state of its inhabitants and finally crush the resistance. Neither can the armed resistance movement hope for any final victory. But it can hope to enlarge the scope of the conflict, and present it as a religious one in which Muslims are being persecuted for their faith. That is at least half true, but it is a destructive as well as a powerful narrative. It adds Myanmar to the long list of countries where Islam appears to be the religion of the persecuted and the outcast, and to frame the justification for their own violent and intolerant revenge. There are already insurgencies of that sort – all of them building on existing ethnic divides and antagonisms – in many parts of south-east Asia, from Thailand to the Philippines.

There is a horrible irony in the involvement here of Aung San Suu Kyi, who appeared to be bringing to Myanmar the message of universal human rights – which would transcend or at least set limits to the brutalities of the old world. The Nobel Prize winner, who appeared for decades as the epitome of principled and unflinching defence of human rights, now appears as the unfeeling figurehead of a vicious regime.