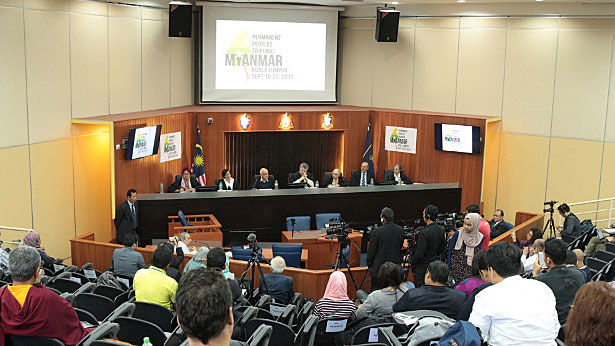 22 Sep 2017 – An international panel of judges declared today that the Myanmar government is guilty of committing genocide against Rohingya Muslims, who have been fleeing the country following months of military crackdowns against the minority group.

The Permanent Peoples’ Tribunal (PPT), a network of scholars and experts from around the globe, delivered its verdict after five days of hearings and testimony from witnesses in the Malaysian capital, Kuala Lumpur.

“[T]he State of Myanmar is guilty of the crime of genocide against the Rohingya group,” Daniel Feierstein, an Argentinian jurist who headed the panel, said in reading out its unanimous verdict at the University of Malaya.

“Moreover, that genocide against the Rohingya is now taking place with ongoing acts of genocide and the possibility the casualties of that genocide could be even higher in the future if nothing is done to stop it,” he went on to say.

Top UN officials have described what’s occurring in Myanmar’s northwest state of Rakhine as “ethnic cleansing,” but have not used the term “genocide.” Ethnic cleansing, unlike genocide, has not been designated as an independent crime under international law.

Crimes against the Rohingya qualified as genocide because Myanmar had pursued “systematic policies of discrimination and physical elimination,” and “active denial of identity and culture” against them, the PPT said.

The panel gathered evidence from witnesses, experts and prosecutors showing there was “systematic use of the whole spectrum of atrocious violations of the right to life and dignity of the affected populations.”

“Raping of women was possibly the most conspicuously present, beside the killing and burning of children and elderly, tortures, and the long list of acts included in the definitions of genocide, crimes against humanity and crimes of war,” the tribunal added.

More than half a million Rohingya Muslims have fled into Bangladesh in the past year amid what Amnesty International called mass scale “scorched-earth” campaigns in Rakhine state.

Myanmar’s military had launched security operations in Rakhine after Rohingya militants attacked police posts and killed some two dozen security forces. About 1,000 people have been killed in clashes and security sweeps, according to the U.N.

The verdict by the experts on Friday marked the first time international jurists had described the situation in Rakhine as “genocide.”

Myanmar government representatives did not testify during the hearings, or respond to requests to appear before the tribunal, according to PPT officials. The Myanmar embassy in the Malaysian capital did not respond to calls from BenarNews, an RFA-affiliated online news service.

The tribunal also found that the Myanmar government had “genocidal intent” against other Muslims in the country, and the Kachin people, and that it had committed “crimes of humanity” against them.

The Kachin ethnic group lives in northern Burma’s Kachin State. Rebels in Kachin have been fighting for decades for independence or autonomy within a federal Myanmar, which successive governments of the ethnically diverse country have long rejected.

The Permanent Peoples’ Tribunal – founded in 1979 and headquartered in Italy – is an “opinion tribunal” whose rulings are not legally binding. It began deliberations in London in March into whether state crimes were being committed against various groups in Myanmar.

The tribunal will forward its findings to international bodies and civil groups in order to keep pressure on the Myanmar authorities, Feierstein told reporters in Kuala Lumpur.

Myanmar government officials have blamed atrocities, including the burnings of hundreds of Rohingya homes in Rakhine, on the Arakan Rohingya Salvation Army (ARSA), which it had branded as a terrorist group.

During her address to the U.N. General Assembly on Thursday, Bangladesh Prime Minister Sheikh Hasina called on Myanmar to stop the “violence and the practice of ethnic cleansing in Rakhine” immediately and without condition.

She also called for “safe zones” to be created in Rakhine so all communities living there could be protected “irrespective of religion and ethnicity.”

On Friday, the U.N.’s resident coordinator in Bangladesh said the United Nations would need $200 million over the next six months to deal with the unprecedented influx of refugees from Rakhine.

Earlier this week, the United States announced that it would provide close to $32 million in new humanitarian aid to help with the refugee situation in southeastern Bangladesh and Rohingya who were displaced within Rakhine.

Speaking before the U.N. Security Council, U.S. Vice President Mike Pence also called on Myanmar’s security forces to end the violence immediately. “The images of the violence and its victims have shocked the American people and decent people all over the world,” he said.

In a speech to diplomats in Naypyidaw earlier this week, de facto Myanmar leader Aung San Suu Kyi said there had been no further clashes or clearance operations after Sept. 5, and claimed that any human rights violations would be addressed “with strict norms of justice.”