Venezuela Reports Oil Prices in Chinese Currency, Shunning the ‘Tyranny of the Dollar’

Following the imposition of U.S. sanctions, Venezuela has quoted its oil prices in the Chinese Yuan, going against the global norm. 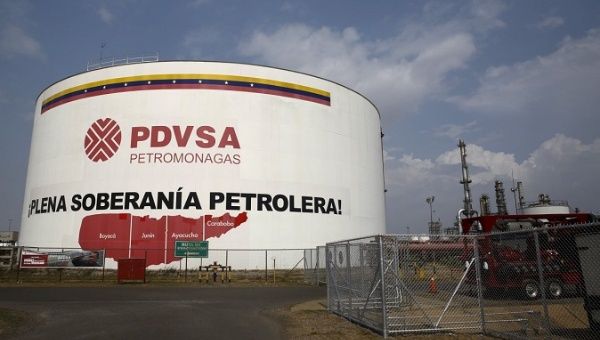 A PDVSA oil tank in the state of Anzoategui, Venezuela. | Photo: Reuters

16 Sep 2017 – Venezuela, the country with the largest oil reserves in the world, began on Friday [15 Sep] to report its crude oil prices in the Chinese Yuan, bucking the oil market norm of pricing in the U.S dollar.

“This format is the result of the announcement made on September 7th by the President (Nicolas Maduro)… that Venezuela will implement new strategies to free the country from the tyranny of the dollar,” the Venezuelan Oil Ministry said in a statement after the price bulletin was posted.

The decision to operate with Chinese currency was announced last week as a way for the country to overcome the negative impact of financial sanctions imposed by the United State government of President Donald Trump against Venezuela. The U.S. has claimed its sanctions are intended to “deny the Maduro dictatorship a critical source of financing.”

Twitter above: “Venezuela responds geopolitically to the gringo’s sanctions, by quoting its crude prices in yuans. This accelerates the shift of financial alignment in the region.”

“The market is dominated by transactions with the U.S: dollar, and we must develop other ways to conduct international transactions,” the Finance Minister, Ramon Lobo said to VTV last weekend.

Venezuelan government officials have said that under the regime of the new sanctions, servicing debts and import payments on goods has become significantly more difficult, as U.S. banks are refusing to receive public funds. This has also affected the state oil company, PDVSA’s ability to sell crude on the market.