The Mexican FEMSA-run bottling company operating the plant in the region is said to have consumed at least 1.08 million liters of water per day in 2016. 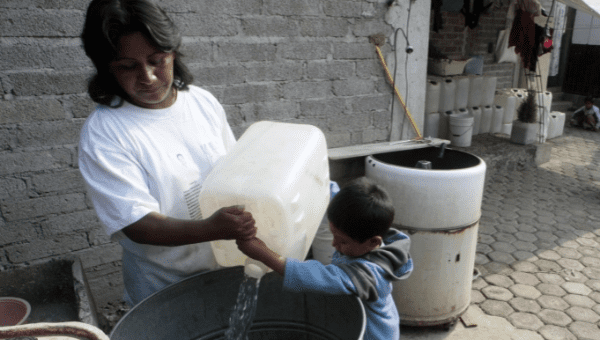 A mother and son fill a container with water collected from a public tap in Tecacalanco, on the outskirts of Mexico City. | Photo: Reuters

17 Sep 2017 – A Coca-Cola plant is said to be taking up copious amounts of water to manufacture its signature soda, in turn, drying up the wells in southern Mexico.

A report in Truthout says supplies are disappearing in San Felipe Ecatepec, an Indigenous town three miles outside of San Cristobal de las Casas in the state of Chiapas.

The Mexican FEMSA-run bottling company operating the plant in the region is said to have consumed at least 1.08 million liters of water per day in 2016 and has affected many neighboring communities.

Despite Chiapas having the highest renewable water resources per capita in the country, one in three people in rural areas lack safe drinking water and the tap water is widely considered unsafe to drink.

“We have been asking the government to install a deep well in the community for 12 years,” Urbano told Truthout. “We’ve gone to the municipal, state and federal governments, but they’ve done nothing.”

FEMSA has said it is trying to replenishing supplies in the region through its social programs, including reforestation and rainwater catchment projects.

According to Antonino Garcia, an agronomist and researcher at Chapingo University’s San Cristobal campus, the water issue in the region is historical. San Cristobal has been developing since 1970’s but “there was no urban planning. And that’s been aggravated by public policies that don’t pay attention to the Indigenous people of the state,” Garcia said.

Shortages have also become more severe because of climate change and salmonella. The research institute, ECOSUR, found a high level of bacterial pathogens in the local wetlands, making the making the water unsafe for drinking.

After surveying the region in May, Leo Heller, the UN Special Rapporteur on the Human Right to Safe Drinking Water and Sanitation, urged the Mexican government to take immediate steps to “expand, and improve reliable, safe and affordable access to water and sanitation for all, including deprived, marginalized and indigenous communities who are poorly served by a struggling national water and sanitation system in many locations.”

“Indigenous peoples I met complained of lack of services and contamination of water sources that they rely on due to largely unregulated activities of mining, industry, and hydrocarbon extraction companies. In Chiapas, I witnessed indigenous women collecting water from sources clearly hazardous to health,” he added.

Many public health organizations have raised concern over the direct link of the soda consumption with deteriorating health conditions such as Mexico’s soaring obesity and diabetes.

Diabetes is the leading cause of death in Mexico, according to a 2012 National Health and Nutrition Survey and affects 13 million people in the country. And another study stated one in six people suffering from the disease were directly linked to soda consumption.

The soda giant has come under fire in the past for its water use in other countries including Guatemala, El Salvador, Mexico, India, Turkey and Namibia.

In March 2016, Coca-Cola shut down at least 20 percent of its bottling plants, after the farmers and nonprofits held mass protests in the drought-stricken southern Indian state of Tamil Nadu

Earlier this year, more than a million traders in India boycotted Coca-Cola and PepsiCo, over concerns regarding the excessive use of water resources. “These foreign companies are using up scarce water resources of the state,” K Mohan, secretary of the Vanigar Sangam, one of the associations supporting the ban, told The Guardian.

In August 2016, the Coca-Cola Company said it had reached a goal it set a decade ago to “replenish” or restore the equivalent quantity of all the water it uses in a year in its global operations to produce, bottle and sell its beverages.

It said it had done so by supporting community projects for water sanitation and infrastructure, watershed support and even reforestation, while 145.8 billion liters are treated and recycled into local supplies.