Why 38,000 Muslim Rohingya Refugees Have Just Fled Their Buddhist Home in Burma/Myanmar 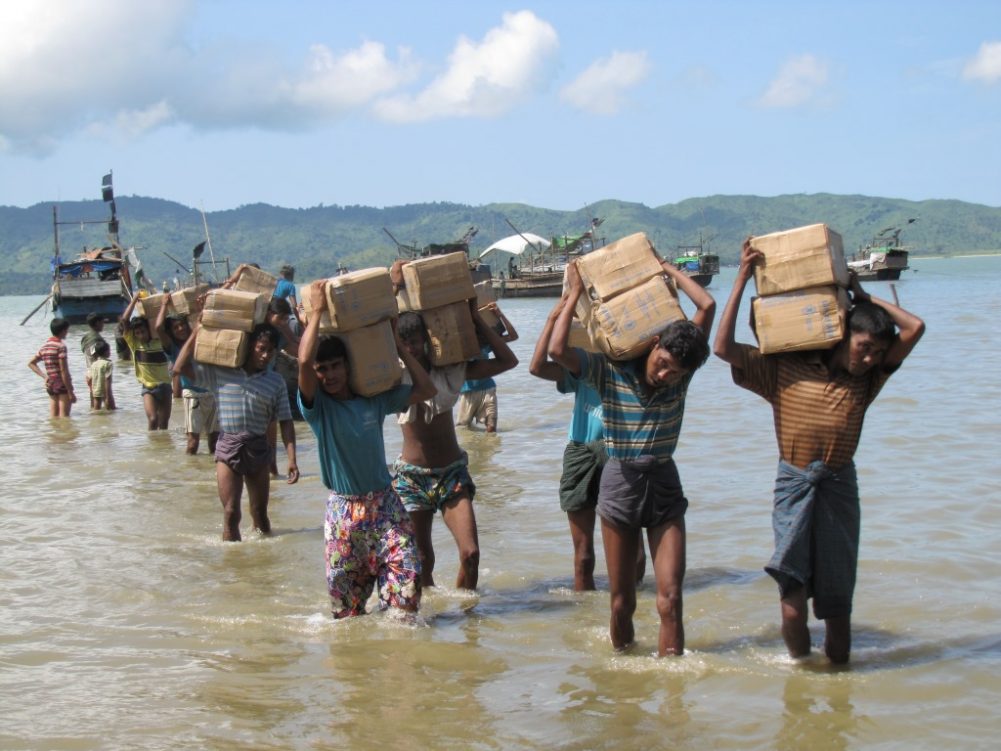 An internally displaced persons camp near Sittwe, Myanmar, that can only be accessed by sea, in 2013. Photo by Mathias Eick, EU/ECHO, Rakhine State, Myanmar/Burma, September 2013. | https://tricy.cl/2wpzfwk

1 Sep 2017 – On Friday, August 25, the stream of refugees began arriving in Bangladesh, fleeing over the country’s border with Myanmar. Some 38,000 Rohingya, the majority women and children, have now crossed the Naf River. 20,000 or more are stranded on the border, where some have been for days, blocked by Bangladesh security forces.

The refugees, minority Rohingya Muslims from Myanmar’s Rakhine State, are escaping a surge of violence against their communities that began after attacks were launched on dozens of state security stations by the Arakan Rohingya Salvation Army (ARSA) on August 25th, killing 12 people. Government sources claim to have killed at least 370 insurgents in reprisal; other sources claim villagers have been massacred, and there are reports of widespread arson and violence against the Rohingya.

Rakhine is home to an estimated 1.1 million Rohingya, a stateless Muslim minority that has suffered from more than 40 years of persecution. In 2012, deadly riots between Muslims and the Buddhist majority forced more than 100,000 Rohingya from their homes into squalid displacement camps, where they have remained since.

In October 2016, a smaller attack by militants triggered a counter operation that sent 74,000 Rohingya fleeing across the border, bringing with them horrifying allegations of violence perpetrated by the military and Buddhist vigilante citizens in response. A report from UNHCR claims that government soldiers gang-raped Rohingya women and girls and details children and infants having their throats slit and the elderly and disabled being thrown into burning buildings alive.

On Wednesday, U Wirathu, a monk from the Buddhist nationalist organisation Ma Ba Tha known for his sermons inciting hatred and violence against Muslims, gave a speech at a rally in the capital, Yangon, demanding all international NGOs be expelled from Rakhine State and martial law be established, Al-Jazeera reported.

According to the human rights group Fortify Rights, Rohingya are subject to discriminatory restrictions on marriage, family size, and movement. Their religious buildings have been destroyed, and Myanmar has repeatedly restricted humanitarian assistance and media access to the area.

The Rohingya are a distinct historical Muslim community whose presence in what is now Myanmar goes back at least to the early 19th century and possibly much earlier, London-based Burmese human rights activist and Buddhist Maung Zarni told Tricycle Thursday. Modern Myanmar denies them citizenship, he explained, “and they are regarded by most Burmese as descended from itinerant Bengali laborers who never went home.”

In recent decades the Buddhist majority in Myanmar has become increasingly hostile to the Rohingya, and inflammatory rhetoric from both the state and monastic communities about a feared “Islamic takeover” of the Buddhist country has stoked the fires of violence and discrimination against them.

Rights groups in the region have been increasingly critical of Myanmar leader Aung San Suu Kyi, whose National League for Democracy party swept to power in 2015, offering hope that Myanmar would embrace democracy and human rights after decades of brutal military rule.

“Aung San Suu Kyi has been putting out statements [which are] consistently disturbing, and her office is generating anti-Rohingya, anti-aid worker propaganda, fueling tensions in the country,” Matthew Smith of Fortify Rights told CNN. “As de facto head of state, Aung San Suu Kyi needs to be calling for calm, calling for [the] military to use restraint. [Her] messaging could not be more irresponsible right now.”

According to Time magazine, a Facebook page belonging to Aung San Suu Kyi’s information committee posted allegations that aid workers had colluded with the attackers, saying World Food Program biscuits were found at an alleged training camp. By Wednesday, most aid organizations had pulled their staff out of northern Rakhine, fearful for the safety of their workers.

And according to Zarni, there have been troubling signs about Suu Kyi’s position on the Rohingya for some time. “Suu Kyi has to be held accountable for her role in attempting to officially erase the Rohingya from Burma,” said Zarni. “Immediately after she was elected, she requested that UN officials not use the term ‘Rohingya,’ which she said was ‘not factual but emotive.’ This denial of Rohingya history and identity in Burma is akin to the passing of the Nuremberg laws. The Jews were told, ‘You are no longer German citizens.’ We have a similar scenario here. Genocide is not simply bombing and gassing and starving people. For the perpetrators, the victims never existed as who they say they are. There were no crimes, because you cannot commit a crime against a people who don’t exist.”

Zarni, once the head of the Free Burma Coalition that fought to liberate Myanmar from the military junta, is fiercely critical of Suu Kyi. “She is neither liberal and pro-human rights nor is she a Buddhist,” he said. “We don’t judge politicians by what they say they are but by what they do. On that count, Suu Kyi is a complete failure.”

After Burma attained independence in 1948, the Rohingya were among the various ethnic minorities who rebelled against the government. In 1961 they surrendered in return for the promise of “absolutely no religious or ethnic discrimination” against Rohingya on the part of Rakhine Buddhists and a guarantee of “equal protection under the law.” Colonel Saw Mint, the Commander of the Border Area Administration and Territorial Forces, agreed, and steps were taken to give the Rohingya limited self-government in allegiance to the Union of Burma. When nationalist hardliners within the military staged a coup d’etat months later, motivated partially by a fear of ceding too much power to minorities, a process of disempowering or ethnically cleansing minorities who are not Burmese Buddhists began and has continued to the present day, according to a report by the Middle East Institute.

In 1978, military leader Ne Win launched “Operation King Dragon,” a “centrally organized, violent operation” against the Rohingya, which, according to former military intelligence chief Khin Nyunt, sent almost 300,000 Rohingya fleeing into Bangladesh. In 1982 the Citizenship Act was passed, a bill that excluded Rohingya from citizenship. Since then waves of violence and a policy of disempowerment and discrimination have constituted what Zarni called “slow-burn genocide.”

The Rohingya genocide may be largely driven by nationalist ideology, but that is not the only factor at play. Rakhine State is rich in natural resources and coveted coastal access to the Bay of Bengal and the Indian ocean. China, India, Japan, and South Korea all have economic or political interests in the region.

The rise in violent Buddhist nationalism is bad news for the progress of democracy and human rights in Myanmar, said Zarni, and even the Buddhist majority will pay a price.

“The ultimate winners are the military, the local economic czars, and the external players from China and elsewhere,” he said. “The Rakhines and the Burmese majority that are backing the ethnic cleansing are the ultimate losers, after the victims of the genocide themselves. The Burmese majority lose because the political reforms, the movement towards democracy and human rights, is going off the rails. The Rakhine, who may actually resent Burmese rule more than the Rohingya, lose because they have become beholden to the Burmese military: they cannot cleanse Rakhine for Buddhists without their help. Meanwhile, in the process Aung San Suu Kyi’s international credibility has been destroyed. From a strategic point of view, you could view it as brilliant on the Burmese military’s side.”

The U.N. has said the recent events in Rakhine State are “very likely commission of crimes against humanity.” The Myanmar government’s treatment of the Rohingya has been likened to ethnic cleansing by some, and to genocide by others. Although Zarni and others have been calling the government’s actions genocide for years, many others have been reluctant to do so.

According to international legal scholar and activist Katherine Southwick, “Tepid policies toward Myanmar and the Rohingya betray a deep-seated reluctance to label these crimes as genocide for fear of subverting the narrative so many in the world have waited for; an enlightened democratic transition. The notion of genocide in Myanmar risks turning the country back into an international pariah rather than an international darling.”

““I utterly condemn the violent attacks on security personnel, which have led to the loss of many lives and the displacement of thousands of people,” U.N. High Commissioner for Human Rights Zeid Ra’ad Al Hussein said in a statement Tuesday. “Unfortunately, what we feared appears to be occurring. Decades of persistent and systematic human rights violations, including the very violent security responses to the attacks since October 2016, have almost certainly contributed to the nurturing of violent extremism, with everyone ultimately losing.

“This turn of events is deplorable,” he continued. “It was predicted and could have been prevented.”

Matthew Gindin is a freelance journalist and educator who lives in Vancouver, British Columbia. A former Buddhist monk in the Thai Forest tradition, he has taught meditation in various contexts for over a decade. He is the author of Everyone In Love: The Beautiful Theology of Rav Yehuda Ashlag.