Now is exactly the time to speak out against free-market exploitation, says author of ‘The Shock Doctrine.’ 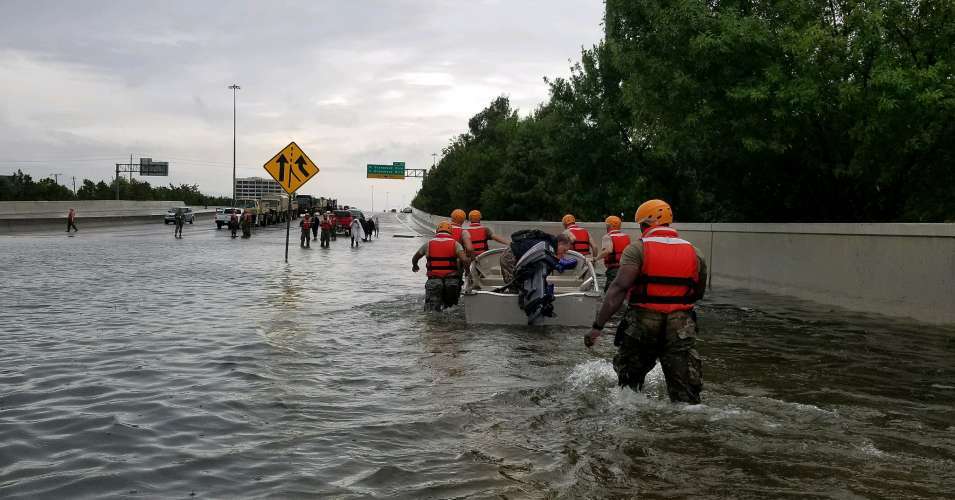 The National Guard arrived in Houston over the weekend to rescue residents, many of whom hadn’t been able to evacuate ahead of Hurricane Harvey’s landfall. (Photo: National Guard/Flickr/cc)

28 Aug 2017 – As millions of Houston residents faced life-threatening flooding on Monday with the saturated remnants of Hurricane Harvey expected to bring even more heavy rains in the days ahead, journalist Naomi Klein warned against the notion, already being pushed by some on the right, that the disaster shouldn’t be “politicized.”

“The window for providing meaningful context and drawing important conclusions is short. We can’t afford to blow it.”
—Naomi Klein”

Now is exactly the time to talk about climate change, and all the other systemic injustices — from racial profiling to economic austerity — that turn disasters like Harvey into human catastrophes,” Klein wrote at The Intercept on Monday.

In her piece, Klein warns that the absence of journalists, lawmakers, or experts on the cable news shows and in major papers connecting the dots between human-caused global warming and the severe destruction now underway in Texas is itself a “highly political decision.” And the wrong one.

“The window for providing meaningful context and drawing important conclusions is short. We can’t afford to blow it,” she writes. “Talking honestly about what is fueling this era of serial disasters — even while they’re playing out in real time—isn’t disrespectful to the people on the front lines. In fact, it is the only way to truly honor their losses, and our last hope for preventing a future littered with countless more victims.”

On Sunday, Trump ally Sheriff David Clarke accused progressives of politicizing the storm by discussing President Donald Trump’s response to the massive floods and damage to the nation’s fourth-largest city.

The deranged lib left is soiling their underwear in excitement over politicizing Tropical Storm Harvey to use against @realDonaldTrump. MAGA pic.twitter.com/zDTHYNua6l

In a Washington Post column, conservative radio host Hugh Hewitt chimed in: “Some advice for my colleagues in the media: Be very slow to politicize this storm. It looks to be quite awful in its impacts. The pull of domestic politics generally and the president specifically on every story is so strong these days that it takes great intentionality to not make this an occasion for another round of Trump trashing or boosterism.”

In pair of tweets earlier on Monday, Klein cautioned against dismissing concerns about climate change and its impact on natural disasters like Harvey, as well as questions about economic inequality and how low-income neighborhoods and communities have been historically left behind by the federal government both in terms of how cities prepare for disasters and how they respond to them.

YES. And the right will waste no time exploiting this disaster to further the social + economic agenda that creates these catastrophes https://t.co/CqYNOGoLqj

We can't respond to crises correctly unless we diagnose causes correctly. Now is *exactly* the time 2 talk #climatechange, racism, austerity

Several news reports have shown the impact of Harvey on Southeast Texas’s low-income residents. In Rockport, a coastal city 225 miles southwest of Houston, the BBC reported many residents were unable to evacuate ahead of the storm. One woman stayed “because she had no means to leave and no place to go,” telling the news outlet:

I had some problems getting out of town, a little broke and stuff, so I had to come home and, you know, tough it out. We’re all the working class people. We’re the ones who go to the restaurants and wait on you and pick up your trash and do all that work. We don’t have a lot of money.

Also commenting on the unequal impacts of the storm was Andy Horowitz, professor of history at Tulane University.

There is no such thing as a "natural" disaster, because who's in harm's way, and the kind of harm they face, is a product of human choices.

Klein has also written extensively about the impact of “disaster capitalism” in the wake of Hurricane Katrina and other catastrophic events—the exploitation of crises for corporate gain, often under the guise of relief or reconstruction efforts. Last month, she wrote in the Guardian about a list of “Pro-Free-Market Ideas for Responding to Hurricane Katrina and High Gas Prices,” compiled by the Republican Study Committee (RSC) in September 2005—weeks after Katrina and the failure of the city’s levees had turned New Orleans into a disaster zone.

The group, then headed by Vice President Mike Pence, saw the severe flooding as an opportunity to “make the entire affected area a flat tax free-enterprise zone,” “give school-choice vouchers for displaced children,” and “make the entire region an economic competitiveness zone (comprehensive tax incentives and waiving of regulations).”

On Twitter, Klein made clear that Houston should be wary of similar responses by for-profit industries as the area recovers from Harvey. 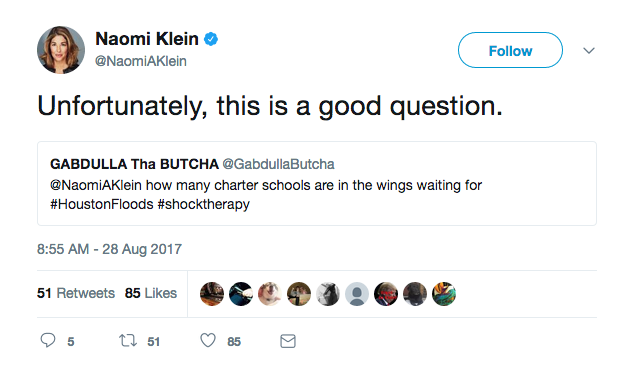 Update: This post has been updated from its original version to include excerpts from Klein’s new column.