100 Years On: The Balfour Declaration Explained 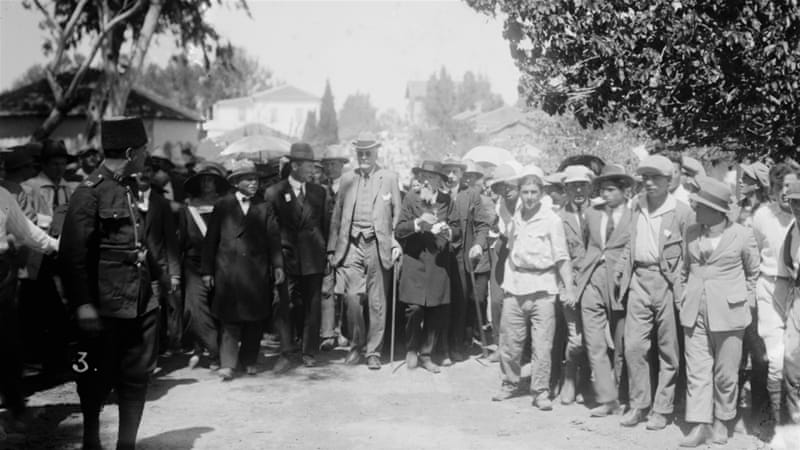 29 Oct 2017 – This week, Palestinians around the world are marking 100 years since the Balfour Declaration was issued on November 2, 1917.

The declaration turned the Zionist aim of establishing a Jewish state in Palestine into a reality when Britain publicly pledged to establish “a national home for the Jewish people” there.

The pledge is generally viewed as one of the main catalysts of the Nakba – the ethnic cleansing of Palestine in 1948 – and the conflict that ensued with the Zionist state of Israel.

It is regarded as one of the most controversial and contested documents in the modern history of the Arab world and has puzzled historians for decades.

What is the Balfour Declaration?

The Balfour Declaration (“Balfour’s promise” in Arabic) was a public pledge by Britain in 1917 declaring its aim to establish “a national home for the Jewish people” in Palestine.

The statement came in the form of a letter from Britain’s then-foreign secretary, Arthur Balfour, addressed to Lionel Walter Rothschild, a figurehead of the British Jewish community.

It was made during World War I (1914-1918) and was included in the terms of the British Mandate for Palestine after the dissolution of the Ottoman Empire.

The so-called mandate system, set up by the Allied powers, was a thinly veiled form of colonialism and occupation.

The system transferred rule from the territories that were previously controlled by the powers defeated in the war – Germany, Austria-Hungary, the Ottoman Empire and Bulgaria – to the victors.

The declared aim of the mandate system was to allow the winners of the war to administer the newly emerging states until they could become independent.

The case of Palestine, however, was unique. Unlike the rest of the post-war mandates, the main goal of the British Mandate there was to create the conditions for the establishment of a Jewish “national home” – where Jews constituted less than 10 percent of the population at the time.

Upon the start of the mandate, the British began to facilitate the immigration of European Jews to Palestine. Between 1922 and 1935, the Jewish population rose from nine percent to nearly 27 percent of the total population.

What the map of #Palestine looked like 100 years ago

Though the Balfour Declaration included the caveat that “nothing shall be done which may prejudice the civil and religious rights of existing non-Jewish communities in Palestine”, the British mandate was set up in a way to equip Jews with the tools to establish self-rule, at the expense of the Palestinian Arabs.

Why was it controversial?

The document was controversial for several reasons.

Firstly, it was, in the words of the late Palestinian-American academic Edward Said, “made by a European power … about a non-European territory … in a flat disregard of both the presence and wishes of the native majority resident in that territory”.

In essence, the Balfour Declaration promised Jews a land where the natives made up more than 90 percent of the population.

Secondly, the declaration was one of three conflicting wartime promises made by the British.

When it was released, Britain had already promised the Arabs independence from the Ottoman Empire in the 1915 Hussein-McMahon correspondence.

The British also promised the French, in a separate treaty known as 1916 Sykes-Picot agreement, that the majority of Palestine would be under international administration, while the rest of the region would be split between the two colonial powers after the war.

The declaration, however, meant that Palestine would come under British occupation and that the Palestinian Arabs who lived there would not gain independence.

Finally, the declaration introduced a notion that was reportedly unprecedented in international law – that of a “national home”.

The use of the vague term “national home” for the Jewish people, as opposed to “state”, left the meaning open to interpretation.

Earlier drafts of the document used the phrase “the reconstitution of Palestine as a Jewish State”, but that was later changed.

Why was it issued?

The question of why the Balfour Declaration was issued has been a subject of debate for decades, with historians using different sources to suggest various explanations.

While some argue that many in the British government at the time were Zionists themselves, others say the declaration was issued out of an anti-Semitic reasoning, that giving Palestine to the Jews would be a solution to the “Jewish problem”.

In mainstream academia, however, there are a set of reasons over which there is a general consensus:

How was it received by Palestinians and Arabs?

In 1919, then-US President Woodrow Wilson appointed a commission to look into public opinion on the mandatory system in Syria and Palestine.

The investigation was known as the King-Crane commission. It found that the majority of Palestinians expressed a strong opposition to Zionism, leading the conductors of the commission to advise a modification of the mandate’s goal.

The late Awni Abd al-Hadi, a Palestinian political figure and nationalist, condemned the Balfour Declaration in his memoirs, saying it was made by an English foreigner who had no claim to Palestine, to a foreign Jew who had no right to it.

In 1920, the Third Palestinian Congress in Haifa decried the British government’s plans to support the Zionist project and rejected the declaration as a violation of international law and of the rights of the indigenous population.

However, the other important source for insight into Palestinian opinion on the declaration – the press – was closed down by the Ottomans at the start of the war in 1914 and only began to reappear in 1919, but under British military censorship.

In November 1919, when the al-Istiqlal al-Arabi (Arab independence) newspaper, based in Damascus, was reopened, one article said in response to a public speech by Herbert Samuel, a Jewish cabinet minister, in London on the second anniversary of the Balfour Declaration: “Our country is Arab, Palestine is Arab, and Palestine must remain Arab.”

Even prior to the Balfour Declaration and the British Mandate, pan-Arab newspapers warned against the motives of the Zionist movement and its potential outcomes in displacing Palestinians from their land.

Khalil Sakakini, a Jerusalemite writer and teacher, described Palestine in the immediate aftermath of the war as follows: “A nation which has long been in the depths of sleep only awakes if it is rudely shaken by events, and only arises little by little … This was the situation of Palestine, which for many centuries has been in the deepest sleep, until it was shaken by the great war, shocked by the Zionist movement, and violated by the illegal policy [of the British], and it awoke, little by little.”

Increased Jewish immigration under the mandate created tensions and violence between the Palestinian Arabs and the European Jews. One of the first popular responses to British actions was the Nebi Musa revolt in 1920 that led to the killing of four Palestinian Arabs and five immigrant Jews.

Who else was behind it?

While Britain is generally held responsible for the Balfour Declaration, it is important to note that the statement would not have been made without prior approval from the other Allied powers during World War I.

In a War Cabinet meeting in September 1917, British ministers decided that “the views of President Wilson should be obtained before any declaration was made”. Indeed, according to the cabinet’s minutes on October 4, the ministers recalled Arthur Balfour confirming that Wilson was “extremely favourable to the movement”.

France was also involved and announced its support prior to the issuing of the Balfour Declaration.

A May 1917 letter from Jules Cambon, a French diplomat, to Nahum Sokolow, a Polish Zionist, expressed the sympathetic views of the French government towards “Jewish colonisation in Palestine”.

“[I]t would be a deed of justice and of reparation to assist, by the protection of the Allied Powers, in the renaissance of the Jewish nationality in that Land from which the people of Israel were exiled so many centuries ago,” stated the letter, which was seen as a precursor to the Balfour Declaration.

What impact did it have on Palestinians?

The Balfour Declaration is widely seen as the precursor to the 1948 Palestinian Nakba when Zionist armed groups, who were trained by the British, forcibly expelled more than 750,000 Palestinians from their homeland.

Despite some opposition within the War Cabinet predicting that such an outcome was probable, the British government still chose to issue the declaration.

While it is difficult to imply that the developments in Palestine today can be traced back to the Balfour Declaration, there is no doubt that the British Mandate created the conditions for the Jewish minority to gain superiority in Palestine and build a state for themselves at the expense of the Palestinian Arabs.

When the British decided to terminate their mandate in 1947 and transfer the question of Palestine to the United Nations, the Jews already had an army that was formed out of the armed paramilitary groups trained and created to fight side by side with the British in World War II.

More importantly, the British allowed the Jews to establish self-governing institutions, such as the Jewish Agency, to prepare themselves for a state when it came to it, while the Palestinians were forbidden from doing so – paving the way for the 1948 ethnic cleansing of Palestine.

One Response to “100 Years On: The Balfour Declaration Explained”