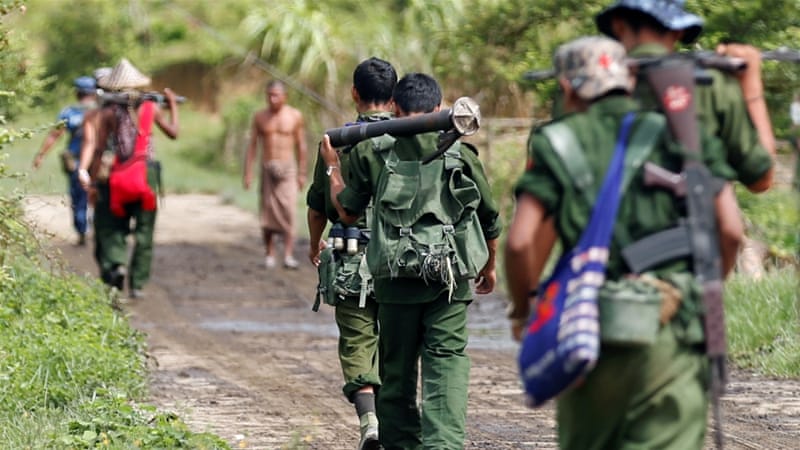 Israel has not divulged details of its ties to Myanmar’s military government, but public records show that it has sold the military there armed patrol boats, guns and surveillance equipment. [File: Soe Zeya Tun/Reuters]

23 Oct 2017- Human rights activists are stepping up efforts to expose Israel’s long and covert history of supplying weapons and military training to regimes while they actively commit massacres, ethnic cleansing and genocide.

The issue of Israel’s trade with rogue regimes has been thrust into the spotlight again after revelations that it is sending weapons to Myanmar, in defiance of a US and European arms embargo.

Formerly known as Burma, Myanmar was condemned last month by the United Nations for conducting what it called a “textbook ethnic cleansing” of the Rohingya, a Muslim minority. Hundreds of thousands of Rohingya are reported to have fled to neighbouring Bangladesh in recent weeks, after evidence of the torching of entire villages, massacres and systematic rapes.

Israel has not divulged details of its ties to Myanmar’s military government, but public records show that it has sold the military there armed patrol boats, guns and surveillance equipment. Myanmar’s special forces have also been trained by Israelis.

Human rights groups are set to stage a protest outside Israel’s parliament on October 30, calling for an immediate halt to the weapons sales to Myanmar.

Israeli firms have also broken with the United States and Europe by supplying weapons and surveillance equipment to militias in South Sudan, where a civil war has raged since late 2013. Some 300,000 Sudanese are believed to have been killed in the fighting.

Eitay Mack, a human rights lawyer, has submitted a spate of petitions to the Israeli courts in an attempt to bring to light details of Israel’s trade with such regimes. He said the cases were designed to hasten war crimes investigations of the officials and contractors involved.

“Many Western states sell arms, but what’s unique about Israel is that, wherever war crimes and crimes against humanity are being committed, you find Israel is present,” Mack told Al Jazeera.

“The companies selling the weapons, and the officials who quietly approve the trade, must be held accountable. Otherwise, why would this ever stop?”

Mack said that Israel’s collusion with Myanmar’s military was part of a pattern of aiding rogue regimes that went back decades and reflected the importance of the arms trade to Israel’s economy.

Over the summer, it was revealed that Israeli defence officials approve 99.8 percent of all requests for arms export licences.

As well as fuelling the current violence in Myanmar and South Sudan, Israel has been accused of clandestinely providing arms used in notorious past episodes of genocide and ethnic cleansing in places such as Rwanda, the Balkans, Chile, Argentina, Sri Lanka, Haiti, El Salvador and Nicaragua. Israel also cultivated close ties to apartheid South Africa, Mack noted.

Yair Auron, a genocide researcher at Israel’s Open University, said that Israel’s supply of weapons to regimes such as Myanmar should be compared to the sending of arms to Nazi Germany during the Holocaust.

“These sales turn me and all Israelis into criminals, because they are sent in our name,” he told Al Jazeera. “We are abetting genocide.”

Efforts by human rights groups to shed light on Israel’s collusion with Myanmar have so far been frustrated by Israeli authorities and the courts.

The Haaretz daily accused Defence Minister Avigdor Lieberman of “lying” when he claimed in parliament last month that Israel’s policy in Myanmar accorded with that of the “enlightened world”.

Officials refused to disclose information of arms exports to the military government during a hearing at Israel’s Supreme Court last month on a petition to halt the sales. Lawyers for the state insisted on closed-door sessions when discussing relations with Myanmar.

The three judges hearing the case issued a gag order to prevent publication of their decision, widely assumed to have approved the continuation of arms sales. They justified the blackout on the grounds that publicity risked damaging Israel’s foreign relations.

Late last year, the same court rejected a petition demanding that officials release documents showing Israel’s role in arming Serbian forces that carried out massacres of Bosnians in the 1990s.

Campaigners are waiting on hearings in a host of other cases concerning South Sudan, Rwanda, Chile, Haiti and Argentina.

In August, Israeli officials argued before the Supreme Court that its exports to militias in South Sudan were “lawful”.

Evidence suggests that Israel sold rifles and surveillance equipment to militias and the army in South Sudan. A UN report found that the Israeli-made Ace and Galil rifles were in widespread use there.

No oversight of permits

Next week, the Supreme Court is due to hear a petition on Israel’s involvement in Rwanda, where it reportedly armed Hutus who carried out genocidal attacks against Tutsis.

Mack noted that there were a handful of officials in the Israeli Defence Ministry overseeing some 400,000 annual permits issued for weapons sales. “That means in practice, there is no oversight at all,” he said.

Israeli companies, meanwhile, are authorised to sell arms to some 130 countries, though activists say there are other states with which Israel deals covertly.

“If countries want the best arms, then they probably go to the US and Europe. But when no one else will sell to you, then you turn to Israel.”
— John Brown, investigative journalist

Israel is the only major weapons exporter that has consistently bucked the global trend of a downturn in arms sales. In March, it was reported that Israel’s weapons trade in 2016 was worth some $6.5bn, up from $5.7bn the year before. That included a 70 percent jump in sales to Africa.

African states accused of widespread human rights abuses were among more than 100 countries that attended the annual Israel Defence Exhibition, a weapons trade fair, in June.

Despite its tiny size, Israel is believed to be the sixth biggest arms exporter in the world – and the largest one per capita.

That has made arms sales integral to the Israeli economy, accounting for possibly as much as 8 percent of gross domestic product. As many as 100,000 Israeli households are reported to be dependent on the arms industry.

John Brown, an investigative journalist with the Haaretz newspaper who writes under a pseudonym, said there was a long history of what he called “Uzi diplomacy” – referring to the Israeli sub-machine gun that became a favourite with security forces around the world from the 1960s onwards.

“If countries want the best arms, then they probably go to the US and Europe. But when no one else will sell to you, then you turn to Israel,” he told Al Jazeera.

“The benefits for Israel are not just measured in money. Often even more important are the diplomatic and strategic alliances Israel can gain from this arms trade.”

Mack said that mounting international outrage over the plight of Myanmar’s Muslim minority provided an opportunity to shine a light on Israel’s long role in supporting regimes in the midst of ethnic cleansing and genocide.

In what sounded like a rare rebuke to Israel, Nikki Haley, the US ambassador to the UN, said last month: “Any country that is currently providing weapons to the Burmese military should suspend these activities until sufficient accountability measures are in place.”

Although the Israeli courts have blocked access to documents that could shed light on what arms have gone to Myanmar, activists have been able to identify some dealings from open sources.

In September 2015, Min Aung Hlaing, the commander of Myanmar’s army, posted on social media details of a “shopping trip” to Israel that included visits to leading Israeli weapons manufacturers and a meeting with the Israeli military’s chief of staff, Gadi Eisenkott.

A year later, Michael Ben Baruch, an Israeli defence ministry official in charge of exports, visited Myanmar to meet its army’s top brass to sign a deal for patrol boats.

Shortly afterwards, the website of TAR Ideal Concepts, an Israeli company, posted images of its staff training Myanmar special forces and teaching them how to handle Israeli-made Corner-Shot guns.

A conduit for drones

Other analysts have suggested that Israel has also been acting as a conduit for Chinese weapons, including drones, to Myanmar, allowing Beijing to bypass the embargo.

“There is no statute of limitations on war crimes and crimes against humanity, so we will keep putting Israeli officials under pressure till the trade stops,” Mack said. “They will have to endure a regular ‘walk of shame’ in the courts, forcing them to explain their policies and why the documents remain secret.”

He noted that Israel’s success in arms dealing was intimately tied to five decades of its control over the occupied Palestinian territories.

“Israeli companies exploit Israel’s long experience there to sell arms, arguing that the weapons and training have been tested in real-world conditions.”

Brown said that Israel appeared to be indifferent towards the victims of the violence it helped to stoke. This was especially evident during the so-called “Dirty War” in Argentina, through much of the 1970s, when 30,000 left-wing activists were “disappeared”, he said. Israel is believed to have supplied the military government there with some $700m in weapons.

“Of those killed, probably some 2,000 were Argentinian Jews,” he said. “Israel knew that the weapons it was selling were being turned on Jews, but that did not stop it selling arms. It simply didn’t care.”