Mis-informed and Ignorant, Former US Ambassador Derek Mitchell Must Not “Educate” the West about Rohingyas 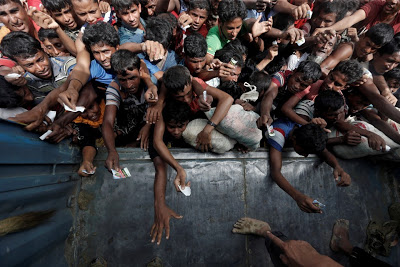 29 Sep 2017 – Silence is golden, especially when you don’t really know what you are talking about.

A case in point is former US Ambassador to my country Derek Mitchell and the genocide of Rohingyas.

He claimed, in writing to me in 2012, that he understood genocide because he is of Jewish origin.

Apparently, he still doesn’t get it. Genocide begins with an assault on group identity: Jews were persecuted because they were Jews.

If he did he would not be looking at the Rohingya issues from this paranoid ‘security’ paradigm as is evidenced in this Atlantic piece.

Myanmar will need to create an “autonomous area” for Rohingyas if their identity were recognised as Rohingyas by the State of Myanmar.

That is ignorance of the highest order!

Here is the crucial historical context and facts Mitchell is himself oblivious to.

1) Rohingyas WERE officially recognised as an ethnic group by the Ministry of Defence, not just by the parliamentary gov. of U Nu. The official recognition remained in tact 2 years after Parliamentary system was abolished. Myanmar Encyclopedia V. 9 was published in 1964, and the Rohingya language program on Burma Broadcasting Service was allowed until 1964.

2) Rohingyas WERE given a separate administration called Mayu District (named after Mayu River), at Rohingyas’ request. It was centrally controlled by the Ministry of Defence’s Border Affairs Division under Colonel Saw Myint.

The district was made up of Maungdaw, Buthidaung and part of Rathedaung.

The Mayu District was established in response to the request made by Rohingya leaders to the military leadership of General Ne Win, not to PM U Nu. The request itself was triggered by Rakhine nationalists’ demands for Rakhine Region as an autonomous Statehood through the parliamentary politics – led by ICS U Kyaw Min.

Rohingya did not wish to be placed under the Rakhine domination or control from Sittwe, hence the request to be administered by the central Bama power in Rangoon.

NLD Vice Chair (then Lt-Col. Tin Oo) was the one who initially set it up in 1959, during the Caretaker Gov of General Ne Win.

My late great uncle Major Ant Kywe and his superior Lt. Colonel Ye Gaung were the ones who were in charge of the actual implementation of the administrative duties of Mayu District in 1961.

Here is the antidote for this stupid, poisonous view [bringing up this (Muslim) “terrorism” bullshit]:

An Evolution of Rohingya Persecution in Myanmar: From Strategic Embrace to Genocide – By Alice Cowley and Maung Zarni | Apr 24, 2017