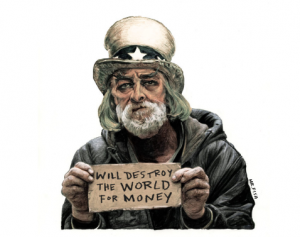 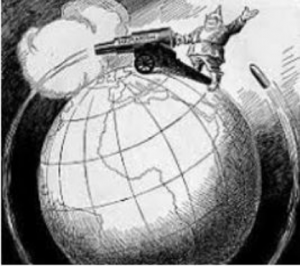 American Sniper! From Las Vegas to Afghanistan and around the world.

“Violence… is as American as cherry pie” H. Rap Brown, July 27, 1967 (50+ years ago). Or to put it another way –the U.S. has a serious addiction problem. The U.S. is addicted to guns and war. The net result is more violence, both at home and abroad.

The details of the Oct. 1, 2017 massacre in Las Vegas continue to unfold.  At least 59 people dead and more than 525 injured at a country music concert.  The mass shooter — a white, multi-millionaire, American sniper armed to the teeth and perched in a 32nd floor luxury hotel room.  Currently, the killer’s motivations remain unknown.  Meanwhile, families grieve, a nation mourns, and the world asks: America– what have you become?

Here is what is clear. The U.S. #1 export product – violence – is coming home to roost. Violence begets violence. We cannot do to the earth, air, and water, to people, plants and animals without doing to ourselves. What goes around comes around. U.S. gun violence, endless wars, and environmental destruction bringing on climate disaster hurricanes, raging wild fires, etc. are all interconnected. But many Americans, like other addicts, remain in denial. This is what we hear:

“The Vegas sniper had a second amendment right to possess guns – even 47 guns in his homes and hotel room; we need to wage war for peace, freedom and democracy. As for destroying earth’s environment, it’s an unintended consequence of empire –‘progress’ and making money, and besides – technology will provide a solution to the problems of technology. As the president says, ‘believe me’.”

Oct. 6, 2017 marks the 16th anniversary of the longest foreign war in U.S. history. The U.S. has spent $5 trillion on wars since 9-11. That $5,000,000,000,000 could have been spent on health care, education, cleaning up the environment, etc. Instead of ending the U.S. war in Afghanistan, Trump has now ordered more U.S. troops sent there. And it’s not only Afghanistan where the U.S. is waging and threatening war. It’s Iraq, Syria, Libya, Yemen, etc. And now threatening war on Iran, Venezuela, the “total destruction of North Korea,” and increasing tensions with Russia and China.

It’s time to end the wars and the threat of wars and stop the destruction of the earth. It’s also time for meaningful gun control legislation to help stop or at least reduce the number of mass killings. In short, it’s time for the U.S. to stop making excuses and acknowledge its addiction to guns, war, and violence. It’s time for “we the people” to say enough. No more killing.

No more “one for the road.”