26 Sep 2017 – A month on from counter-terror operations following attacks on police outposts in Myanmar’s Rakhine province, seven United Nations rights experts have called on the Government to stop all violence against the minority Muslim Rohingya community as well as on the global community to “go beyond” statements and take action to save them.

“There have been credible allegations of serious human rights violations and abuses committed against the Rohingya, including extrajudicial killings, excessive use of force, torture and ill-treatment, sexual and gender-based violence, and forced displacement, as well as the burning and destruction of over 200 Rohingya villages and tens of thousands of homes,” said the experts (see end for list) in a news release issued today by the Office of the UN High Commissioner for Human Rights (OHCHR). 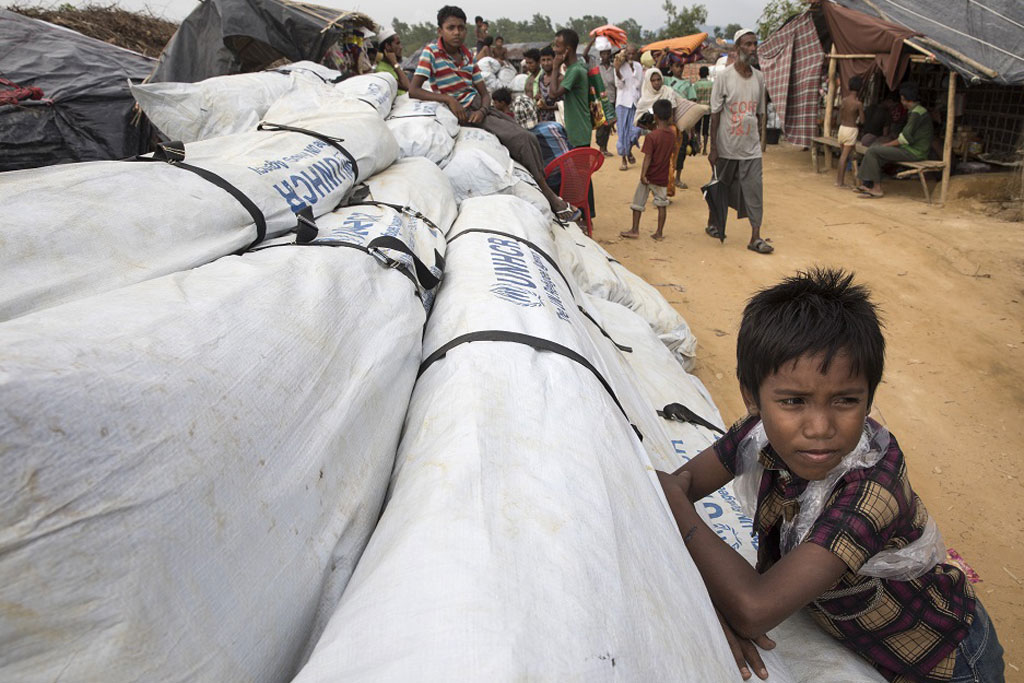 In the news release, the experts, including the UN Special Rapporteur on human rights in Myanmar, recalled the briefing last week by State Counsellor Aung San Suu Kyi, in which she urged the international community to learn along with the country’s Government, the possible reasons behind the current exodus from Myanmar to Bangladesh.

“No one chooses, especially not in the hundreds of thousands, to leave their homes and ancestral land, no matter how poor the conditions, to flee to a strange land to live under plastic sheets and in dire circumstances except in life-threatening situations,” stressed the experts.

According to estimates, more than 430,000 people have crossed into Bangladesh since the violence erupted.

Further in the release, the experts also called on Myanmar authorities to ensure unfettered access to humanitarians to the affected locations and displaced people as well as for rights monitors, including the Human Rights Council Fact-Finding Mission for an independent and impartial assessment of the situation on the ground.

“We call on Aung San Suu Kyi to meet the Rohingya personally in Rakhine state as well as in Cox’s Bazar to talk to those who have fled, as well as those who have stayed, as she says the Myanmar Government is interested in doing.”
— UN rights experts

They further urged the state Counsellor to personally meet the Rohingya.

Concluding the news release, the rights experts also called on UN Member States to “go beyond statements and start taking concrete action” to stop the military and security forces from what they noted “accomplishing their so-called ‘unfinished business’ of getting rid of the Rohingya minority from Rakhine state.”

Meanwhile, the humanitarian crisis across the border, in Bangladesh continues to worsen by the day.

The Office of the High Commissioner for Refugees (UNHCR), one of the UN humanitarian entities involved in the response, reported that despite every effort by those on the ground, the massive influx of people seeking safety has been outpacing capacities to respond, and the situation for these refugees has still not stabilized.

“Many of those who have arrived recently are deeply traumatized [and] despite having found refuge in Bangladesh, they are still exposed to enormous hardship,” Adrian Edwards, a UNHCR spokesperson, said at a media briefing in Geneva today, urging for a redoubling of the international humanitarian response in Bangladesh.

UNHCR along with other UN agencies, including the World Food Programme (WFP), UN Children’s Fund (UNICEF) and World Health Organization (WHO) are also on the ground and assisting in the response efforts.

WFP and UNICEF are distributing food and therapeutic nutrition interventions (such as high-energy biscuits) and have set up child-friendly spaces. WHO is providing critical medical supplies for over half of the 38 mobile medical teams covering refugee settlements and camps.

Special Rapporteurs and independent experts are appointed by the Geneva-based UN Human Rights Council – the highest intergovernmental forum in the UN system on rights issues – to examine and report back on a specific human rights theme or a country situation. The positions are honorary and the experts are not UN staff, nor are they paid for their work.