Big Data Doesn’t Add Up – Except to Disaster

The world is in an agricultural crisis, says Vandana Shiva.

November 2017 – There are two distinct futures for our food and farming.

One leads to a dead end. A dead planet. Poisons and chemical monocultures spreading. Farmers committing suicide because of debt for seeds and chemicals. Children dying for lack of food. People dying from chronic diseases spreading due to nutritionally empty, toxic commodities sold as food. And climate havoc wiping out conditions for human life on Earth.

The first path is industrial, and was paved by the poison cartel, which was born during the second world war to create chemicals that can kill people. After the war, the war chemicals were redeployed as agrichemicals – pesticides and fertilisers. We were told, in effect, that we could not have food without poisons.

The process to make explosives by burning fossil fuels at high temperature to fix atmospheric nitrogen was later used to make chemical fertilisers. The slogan was that there would never again be scarcity of food, because we can now make “bread from air”.

There was the exaggerated claim that artificial fertilisers would increase food production and remove all the ecological limits that land puts on agriculture. Today the evidence is growing that, instead, artificial fertilisers have reduced soil fertility, reduced food production and contributed to desertification, water scarcity and climate change.

In the 1990s we were told we would starve without GMOs – genetically modified crops and other organisms – brought to us by the same poison cartel. There was an exaggerated claim that GMOs would remove all the limits imposed by the environment, and grow food in deserts and toxic dumps. Yet today we have only two GMO applications in widespread use – herbicide resistance and Bt toxins in crops. The first was claimed to control weeds. Instead, it has created superweeds. Bt crops were supposed to control pests. Instead, they have created new pests and superpests, while in India and elsewhere the introduction of Bt cotton has pushed thousands of farmers to suicide.

Now we are being told by agri-industry that in the not-too-distant future “big data” will feed us. Monsanto calls it “digital agriculture”, based on big data and artificial intelligence. It has started to talk about “farming without farmers”. This is why the farmers’ crisis and the suicide epidemic of Indian farmers have drawn no response from government, which is blindly paving the next phase on the dead-end highway.

When I was at the G20 meetings in Hamburg recently, it became extremely evident that pushing digitalisation in every sector of our modern life was going to be defined as the next step of progress. At a time when the world is waking up to the living intelligence of the planet and to the tiniest of life forms, there is an attempt to extend a failed mechanistic paradigm in the name of artificial intelligence and big data.

Monsanto’s partnership with Atomwise allows making a guess which molecules will give Monsanto the next possible pesticide. This is not the intelligence for sustainable management of pests, but rather a narrow bet on the next poison. It is turning life into a digital casino.

This is like playing poker on the deck of the Titanic while the ship is sinking.

The Climate Corporation does not bring farmers the knowledge that the solution to climate change lies below our feet, in the soil. Rather, it sells data. Solum does not work with farmers to understand the rich soil food web – the bacteria, the fungi, the earthworms. Instead, it too sells data.

But data is not knowledge. It is just another commodity to make the farmer more dependent. Effectively, farmers are being told they must outsource their minds to Monsanto.

This is the next step in a dead-end future that ignores the intelligence of seeds, plants, soil organisms, our gut bacteria, our farmers, our grandmothers.

Yet, as I indicated at the beginning of this article, rather than following this blind alley, we can sow the seeds of another future.

All over the world, small farmers and gardeners are already implementing this agriculture, preserving and developing their soils and their seeds, practising agroecology. They are feeding their communities with healthy and nutritious food while rejuvenating the planet. They are thus sowing the seeds of food democracy – a food system in the hands of farmers and consumers, devoid of corporate control, poisons, food miles and plastics. A food system that nourishes the planet and all humans.

Contrary to the assertion that small farmers should be wiped out because they are unproductive, and that we should leave our food future in the hands of the poison cartel, surveillance drones and spyware, small farmers are providing 70% of global food using 30% of the resources that go into agriculture. Industrial agriculture is using 70% of the resources to create 40% of the greenhouse gas emissions while providing only 30% of our food. This commodity-based agriculture has caused 75% of the destruction of soils, 75% of the destruction of water resources, and pollution of our lakes, rivers and oceans, and has pushed 93% of crop diversity to extinction. It is also creating a health crisis by producing nutritionally empty toxic commodities. A billion people are permanently hungry in this system, while more than 2 billion suffer from food-related diseases. Organic farming takes excess carbon dioxide from the atmosphere, where it doesn’t belong, and through photosynthesis puts it back into the soil, where it does belong. It also increases the water-holding capacity of the soil, contributing to resilience in times of drought, flood and other climate extremes.

We cannot address climate change and its very real consequences without recognising the central role of the industrial and globalised food system, which contributes more than 40% of greenhouse gas emissions through deforestation, animals in concentrated animal feeding operations (CAFOs), plastics and aluminium packaging, long-distance transport, and food waste. We cannot solve climate change without small-scale, ecological agriculture, based on biodiversity, living seeds and living soils, and local food systems, with minimal food miles and no plastic packaging.

What we eat, how we grow the food we eat, and how we distribute it will determine whether humanity survives or pushes itself and other species to extinction. 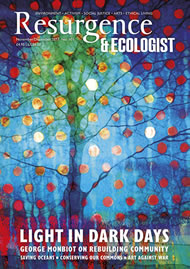