Based on an address on Web Summit Day, 6 Nov 2017, Lisbon, Portugal

7 Nov 2017 – I am an engineer and, for the time being, I am also Secretary-General of the United Nations and we are all here because we believe in the force of Science, Innovation and Technology.

From my perspective, what is important is to combine innovation and technology, innovation and public policy to make sure that innovation works for the good of humankind. But let’s look a little bit in the recent past to be able to project the near future.

For the past few decades, we have witnessed the enormous impact of innovation, science and technology combined with globalization in our world, our economies, our societies, our lives. That impact was essentially good. Enormous increase in growth of trade and economy, huge growth of the global middle class, and drastic reduction in the number of absolute poor.

Very meaningful improvement in the living conditions of the overwhelming majority of the population, growth in life expectancy, decrease of child mortality, soaring literacy rates – globally, it is clear that our world has been moving for the good. But there was some collateral damage to this enormous growth, and I will like to notice two points: first climate change, second growing inequality.

I believe climate change is a defining threat of our times, and climate change, combined with a different set of megatrends, population growth, chaotic urbanization, food insecurity, water scarcity, being climate change the main accelerator, and this interrelation in creating – as we all see- what is probably the biggest threat to our planet today.

We see hurricanes and other natural disasters becoming more and more frequent, more and more intense, and with more devastating humanitarian consequences. We see, at the same time, desertification making progress, human environment being destroyed, people having to flee, massive movement of populations, refugees and migrants, and at the same time we see a larger competition for resources that triggers instability or conflict and makes climate change also a security problem in today’s world.

At the same time, growing inequality – eight men (because they are men, not women), own as much wealth as the poorest half of humanity. As we live in a time of global prosperity, it is more difficult for people to feel that they are left behind, people, but also sectors and regions in the rust belts of this world, [..] looking at the rest of the world, what’s going on, feel sometimes discriminated, they feel angry, and these are factors of instability and conflict. It is undermining the trust of people in relation to institutions.

The trust of people in relation to government, in relation to international organizations, in relation to political establishment. These have also helped the development of forms of populism and xenophobia and racism that undermine the social cohesion of our societies. This means we need to be aware that globalization is a force for good, that the development of new technologies is a force for good, but we need to be attentive to be able to respond to the eventual collateral damage that exists.

There is a way to respond. To respond to climate change with climate action, to respond to increasing inequality with a struggle for a fair globalization. The international community was able to come to two historic agreements, one is the Paris Agreement on climate change, and the second is the Agenda 2030, approved by all nations in the world with a perspective of inclusive and sustainable development with the so called Sustainable Development Goals with the objective of leaving no one behind.

The problem, as you can imagine, is a problem of implementation. It’s very good to have the Paris Agreement on climate change, but first of all, the Paris Agreement is not enough. Even if the Paris commitments are met, the temperatures in the world will be rising over three degrees by the end of the century and this will be catastrophic and on the other hand, it is also clear that not all countries are abiding by the commitments made in Paris, which means that we need to have an enhanced ambition in relation to climate change.

The same applies to fighting for a fair globalization. We need to be able to combine efforts of governments, companies, the business sector, financial markets and civil society in order to make sure that we are able to eradicate poverty, bring education for all, clean the oceans, and do a number of other things that are essential for the life in our planet to be sustainable and to be inclusive.

Again, this is difficult. The problem is implementation. But the good news is that science is in our side. Look at climate action. Today it’s clear that thanks to new technologies, thanks to green technologies, the green economy is the economy of the future. The green business is the good business and you can at the same time, make money and do good.

The same applies to the combination of new technologies that represent what we call today, the fourth Industrial Revolution in relation to information and communication technologies, and namely artificial intelligence that has been so many times mentioned tonight. But also, biotechnologies, nanotechnologies, and other forms of innovation, that will allow us to create the conditions to be able to have indeed, a growth and development that benefits everybody and to create the conditions to combine simultaneously what was the spectacular development we witnessed in the last decades, but with taming the climate and being able to make sure that the benefits of development are distributed by all.

Science is on our side. I am a true believer that this fourth Industrial Revolution can be the answer to the main questions that we are putting ourselves today facing the enormous difficulties that we are still facing in the different aspects of social inequality, of the deterioration of the environment and other threats to our collective life.

As in relation to the past, we need to be able now to look into the near future with the strategic vision and combining the actions of governments with the private sector, with researchers, academia, the civil society, in order to be able to make sure that this fourth Industrial Revolution, is indeed in all its aspects a force for good.

It is clear that this fourth Industrial Revolution will have a dramatic impact in our societies, in our way of life, but also in labour markets. It’s very important to anticipate the potential net negative impacts of this technological evolution. For example, in the country where I live today in the US, the profession that has more people working in it is driving. Now very probably in a few years’ time, we will not need drivers for cars, driver for trucks, and drivers for the majority of the equipment we have to handle.

We risk having massive unemployment, both in the developed and the developing world with the development of some of the new technologies that we are facing. The answer is not of course to stop development, the answer is to be able to adapt the way we work in our societies in order to be able to anticipate these trends instead of responding to it when it comes, and doing it too late as it sometimes has happened in the past.

The way we think our educational systems need to be essentially rethought. Safety nets, social safety nets also need to change and even the way we look at work and leisure, the way we divide our times, the way we divide our lives, will have to change quite dramatically. It is absolutely essential that governments, the civil society, the business sector, the academia work together, discuss together, raise these issues that have been ignored in the public debate because those are the issues that will allow us to be able to face the future and to avoid the mistakes of the past.

My appeal those that are in this web summit, again governments, businesses, academia, researchers, scientists, is to start seriously discussing the impacts of the fourth industrial revolution in the societies of tomorrow. Then, as it was said in several of the interventions we heard, science and technology are not value neutral.

We can use genetic engineering to get rid of diseases and that is fantastic, but we can use genetic engineering to produce monsters, and that is terrible. We can use the cyberspace to facilitate our lives in everyday work that we do and in all other aspects of the way we live in a community, but we can also use the cyberspace to facilitate the recruitment of terrorists for terrorists organizations.

When we are aware of this fact, I think it’s important to think how we can make sure that innovation is a force for good. And there are I think two things really to avoid. First, the stupid reaction to say: let’s stop innovation. It is stupid because it is impossible, and because it will not allow to take benefit of all the positive aspects of innovation, so those that say “this is too dangerous, too complicated, it’s better to stop it,” I think that they have no point.

Second thing is to avoid the naïve approach to think that traditional forms of regulation like the ones we have today for energy or for the financial system or the insurance system can solve the problem. The truth is that those forms of regulation that are usually managed by governments or by inter-governmental organizations take time, they are complex, they are one-sided and obviously they are not able to respond to the fast-changing world we are now facing with these new technologies and new forms of innovation.

Which means that the only way to be able to establish mechanisms of regulation for the future will have to be different, will have to combine all stakeholders, will have to bring together governments, companies like the ones we heard today, scientists, like Stephen Hawking that spoke to us, but also the civil society, the academia, and again establish platforms of discussion, how to do norm-setting, how to establish regulatory frameworks that are flexible, that allow to combine the freedom of innovation that is absolutely essential for the future of humankind, but to combine it with the protection of human rights that is absolutely essential also to preserve the social cohesion of our societies. Governments cannot do it alone.

Inter-governmental organizations like the UN cannot do it alone. This needs to be done by all actors coming and discussing it together, and this is why the Web Summit is so important here today. To do it properly we need to make sure that we combine our energies to make sure that we are able to put all experiences together, and that we use opportunities like these to seriously discuss the problems that we face and at the same time to maximize the potential of the enormous advantages that the innovations we are discussing can provide to our world.

I do believe that this Web Summit is an opportunity for us to come together and coming together to make sure that the power of science, the power of technology and the power of innovation are a power for good to make a better world and for the benefit of us all. 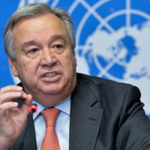 António Manuel de Oliveira Guterres, Portuguese politician and diplomat who is serving as the ninth Secretary-General of the United Nations. Previously, he was the United Nations High Commissioner for Refugees between 2005 and 2015.Guterres was the Prime Minister of Portugal from 1995 to 2002 and was the Secretary-General of the Socialist Party from 1992 to 2002. He served as President of the Socialist International from 1999 to 2005.

One Response to “Fourth Industrial Revolution & Its Dramatic Impact on Society”