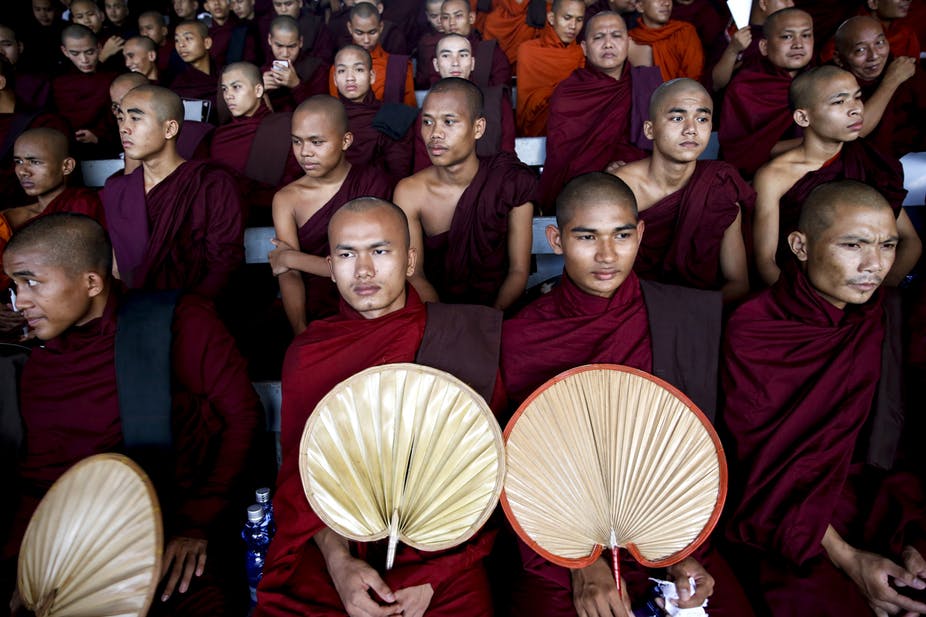 14 Nov 2017 – There is a desperate humanitarian crisis underway in Myanmar, centring around the Rohingya Muslims.

There is what has been described as a “textbook case of ethnic cleansing” against the approximately one million Rohingya who live in the western Myanmar state of Rakhine. As well as retaliations from the Arakan Rohingya Salvation Army – a militant group of Rohingyas – which has been held by the Burmese military to have attacked a number of police and army posts.

And there is also what was seen as a newly emerging democracy with a prominent international figure, Aung San Suu Kyi – the state counsellor of Myanmar and the nation’s de facto leader – guiding the country against a backdrop of Islamophobic Buddhist nationalism.

Buddhists are often regarded in the West as a peaceful people, so to hear of this kind of public prejudice may come as a shock to many. But looking at it from a Buddhist cultural perspective, one can begin to see why this is happening.

Suu Kyi has used her own Buddhist faith to explain her ideas in the past. But it was only in a televised speech to the Burmese nation, in mid-October 2017, that she used some standard Buddhist rhetoric for the first time in her comments on recent events. Suu Kyi evoked the Buddhist principles of “compassion”, “loving-kindness” and “sympathetic joy” to overcome hatred. A “close adviser” later briefed the media, explaining that Suu Kyi’s speech marked an attempt to wrestle Buddhism out of the “hands of extremists”.

One could say that the Buddhist sentiments expressed in Suu Kyi’s speech are in line with the modern Western understanding of Buddhism. But look deeper into modern Asia and you will see Western perceptions aren’t wholly accurate. There is now a form of militant Buddhism, which often promotes the supremacy of Buddhism, and can be Islamophobic, ethnocentric and chauvinistic in its preaching.

This is a Buddhism alien to the romantic, pacifistic, meditative and compassionate Buddhism of popular imagination, and – one would hope – much of Buddhist history. It is a Buddhism in which the Buddhist faith should be protected against the supposed threat of other religions (primarily Islam) overrunning Buddhist Myanmar.

Read more: Militant Buddhism is on the march in South-East Asia – where did it come from

Led by the Mandalay-based monk Ashin Wirathu, it is a religion which campaigns to punish those who offend Buddhism. In its organised form in Myanmar these nationalistic Buddhist ideas coalesce around a group popularly known as MaBaTha – the organisation for the protection of race and religion.

The battle between the two emerging forms of Buddhism in modern Myanmar is linked back to two core principles of the religion.

The first is the familiar Buddhism of calm, non-attachment, and compassion. Until recently one could say this was dominant within Myanmar. Lay meditation movements were important in the revitalisation of modern Buddhism and aspects of popular mindfulness meditation originate from them. The Saffron Revolution of 2007 displayed little of the aggressive nationalism of the MaBaTha movement, with monks evoking the “discourse on loving-kindness” – The Metta-sutta – as a Buddhist path of compassion to overthrow military rule.

The other form of Buddhism has a more ritualised focus. At the risk of oversimplification, this practice is based upon the performance of personal and state rituals in order to protect society from danger. To be a practising Buddhist is to have recited certain texts, and to have paid homage at Buddhist shrines. To be a good Buddhist is to be a good Burmese, and, as it now appears, to “stand with Aung San Suu Kyi”.

It would be too simplistic to argue that Buddhist teachings are irreconcilably at odds with ideas of nationalism and patriotism. However, a sense of superiority and discrimination against minority groups does appear to be indefensible from a Buddhist perspective. Could Suu Kyi’s speech, and the idea that she wishes to use Buddhist teachings in a way at odds with Buddhist nationalism be an acknowledgement that Buddhism needs to become part of the solution in modern Myanmar, rather than an aggressive symbol used by Buddhist nationalists?

If Myanmar is to emerge from military rule and become a modern democratic state then it must save its Buddhism from descending into extremism. If Buddhist identity is focused upon a narrow and uncompromising view of what it means to be Burmese, then it seems likely that Buddhism will become a form of state-sponsored religion promoted by the military. There is nothing fundamentally wrong with this type of Buddhism, but it is clearly engendering a form of nationalistic fervour, and atrocities are being committed and justified.

Can Suu Kyi see beyond the flags and slogans and use Buddhist narratives of compassion and loving kindness? Observers expected this of her, and of the Buddhist nation, many weeks ago, yet we are still waiting.