7 Dec 2017 – Trump’s decision dropped the last fig leaf and added the final straw that will indeed reshape Western Asia and probably the world but not in ways that the Zionists who run the Trump administration planned or wished for. IT IS NOW TIME FOR ACTIONS (see last part after explanation). 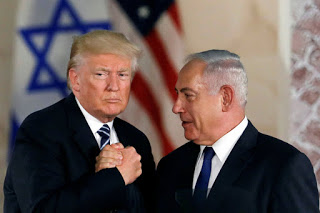 The last fig leaf: Everyone now recognizes that the last fig leaf of the mythical/mirage ”two-state solution” have now ended with this z\announcement by Trump tat illegal occupation and annexation of Arab Jerusalem is recognized by the government of the USA. In my 2004 book explaining why and how the “two state” public relations campaign is not a solution but was invented by Ben Gurion in the 1920s to keep the world thinking that Zionists want peace while they consolidated their power and extended their control and then expanded (eventually to the ultimate goal of the “Jewish empire”. Ben-Gurion was indeed very prophetic when he wrote in his diary that we should give the illusion of accepting to divide the land until we strengthen ourselves and then we will expand to the rest of the country [Erez Ysrael, Nile to Euphrates] “with or without the acceptance of the Arabs” and when he wrote things like

“it must be clear that there is no room in the country for both peoples . . . If the Arabs leave it, the country will become wide and spacious for us . . . The only solution is a Land of Israel, at least a western land of Israel [i.e. Palestine], without Arabs. There is no room here for compromises . . . There is no way but to transfer the Arabs from here to the neighboring countries, to transfer all of them, save perhaps for Bethlehem, Nazareth, and the old Jerusalem. Not one village must be left, not one tribe. The transfer must be directed at Iraq, Syria, and even Transjordan” (and indeed 7.5 million of us are now refugees or displaced people). Ben-Gurion also wrote that “We are presently involved not only in a conflict with our Arab neighbors, but, to some extent, with most of mankind as it is organized in the United Nations – because of Jerusalem. Only a blind man does not see that the sources of this conflict are not political, economic or military alone, but also ideological.”

The ideology he refers to is Zionism (which s a form of colonialism and obviously incompatible with native interest) .

If you like to read my book that documents all the history of plans, collusions, and illusions of peace with colonizers, you can go to http://qumsiyeh.org/sharingthelandofcanaan/

But if your time is limited, the short chapter on Jerusalem is relevant today http://qumsiyeh.org/chapter5/

The last fig leaf has fallen also off of the lie of a “peace process” supposedly led by the US government which in turn has a foreign policy dictated by the Zionist lobby. It is the last fig leaf that protected the Arab leaders from Riyad to Ramalllah who helped Israel get away with ethnic cleansing, crimes against humanity, and war crimes. It is the last fig leaf that protected the hypocritical Western Leaders from Sydney to Berlin to London to Washington who speak of International law and did everything in their power to physically support and fund an apartheid state that violates just about every provision of the Universal Declaration of Human Rights as well as the Fourth Geneva Convention and countless UN resolutions (both UN security council and general assembly resolutions). It even violates the provisions of Israel’s own admission to the UN and should have long been expelled from the UN. 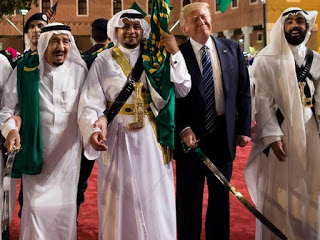 The LAST STRAWS: As the fig leaves have all fallen, the insults to the Arab, Islamic, AND Christian world accumulated to the breaking point. Nearly 70 years have passed (1948-1949) since Zionists depopulated West Jerusalem of its Christian and Muslim Population and 50 years have passed since Zionists illegally (per UN resolutions) occupied East Jerusalem and then illegally annexed it to the illegal apartheid state of Israel in the process causing further ethnic cleansing, so that Jerusalem has been changing from multi-religious and multicultural to the (mainly Ashkenazi) Zionist-Jewish city. Israel has been doing slow torture hoping to drive the remaining Palestinians out of Jerusalem “circumspectly” (as Ben-Gurion also once put it). I say the last straw because this extreme fascist government of Israel that took the final decision to move the US Embassy now appears in full control of the US administration (before there was some thought that is only 95% control). This will break the backs of many camels. To be specific and to start with the first line of camels Arab regimes that were having huge difficulty anyway balancing loads left and right. Loads include normalization with Zionism and imperialism thinking this will guard their regimes (it will not, many US/Israeli puppets were abandoned once their utility expired). Loads also include the heavy load of their people who hate hypocrisy and sympathize with suffering people whether in Iraq, Syria, Yemen, and perhaps especially in Palestine (the Holy Land).  Loads also include their ever deteriorating economies thanks to their corruption, nepotism, lack of democracy, and lack of transparency.  These regimes will now have to reevaluate the strategy: stay the current course of collusion leading to their demise or answer their people’s calls: join the resistance, organize, and ACT (not just issue empty words).

I predicted in previous blogs (e.g. see my November 21st blog http://popular-resistance.blogspot.com/2017/11/will-palestine-be-liquidated-with-arab.html ) that this would happen and I predicted that mayhem and violence will follow and I think all Zionist leaders also see this and predicted it. But their fatal mistake is thinking that they can have “manageable conflicts” that keep their neighbors and victims busy (divide and conquer). Now Zionists in the White House like colonial advocate Kushner are pitting the US against the whole Arab, Islamic, and even Christian world. Their last three bets of this nature were mostly failures (Iraq, Syria, Yemen). They have also failed so far to get the US to attack Iran for them (as they did with Iraq). They are failing to get Saudi Arabia to fight a war in Lebanon (thanks to Lebanese strong civil society). So like a gambler who keeps losing; they are now going for the jack-pot of a global religious war over Jerusalem that they think they will come out victorious and rulers of the world (the reality is a nuclear war that will end Homo sapience). Zionists and their puppets MUST fail like before. But we need to ACT now to stop it. We need all collaborators to see the danger (even to themselves). It is urgent and existential struggle.

The people of Palestine are of course the first and main line of defense for our country. My sister Sahar wrote a blog about this from her (Christian) perspective that I thought brought out a good analogy of why this could be the last straw for the people.

The South African BDS movement issued a call to action that included this: “Actions speak louder, it is the time for concrete steps to hold Israel accountable for its unlawful annexation of Palestinian land and its oppression of Christian, Muslim, Jewish and all other Palestinians.” How to act? I say be proactive not reactive, plan, and above all ORGANIZE. Here are 70 ways to act: http://qumsiyeh.org/whatyoucando/

I would add: cut off all contacts with the US administration. Any decent Arab or Muslim leader would do that. Any who does not needs to answer to the people.