‘No Such Thing as Rohingya’: Myanmar Erases a History 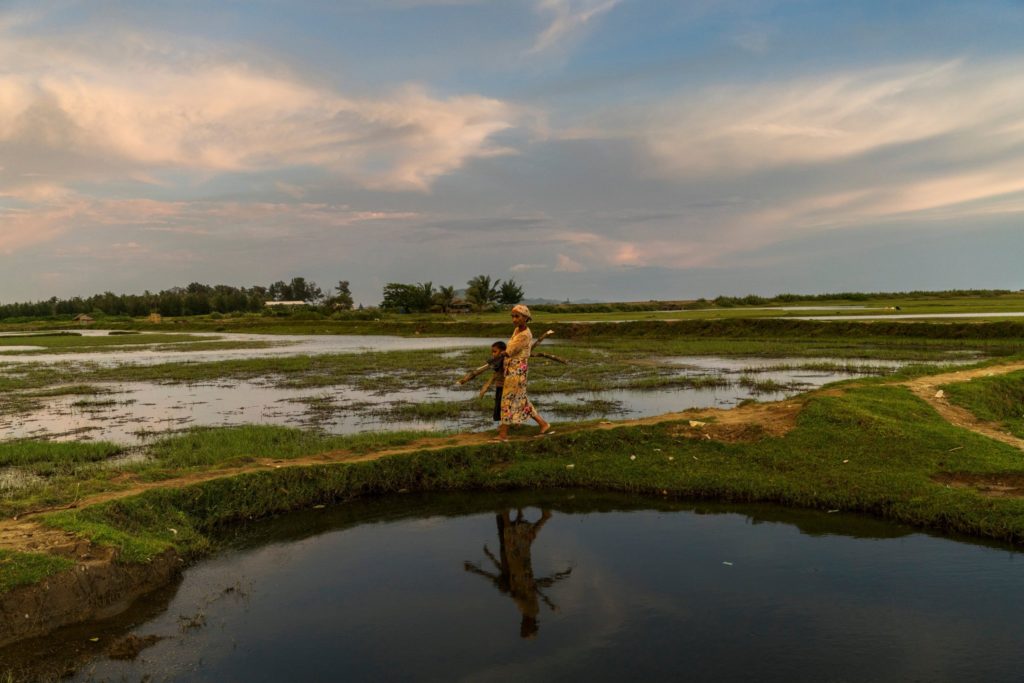 A Rohingya woman and her child returning to the Basara camp in Sittwe, Myanmar. Across central Rakhine, about 120,000 Rohingya have been interned in camps. Many more have fled the country.
Credit Adam Dean for The New York Times

2 Dec 2017 — He was a member of the Rohingya student union in college, taught at a public high school and even won a parliamentary seat in Myanmar’s thwarted elections in 1990.

But according to the government of Myanmar, U Kyaw Min’s fellow Rohingya do not exist.

A long-persecuted Muslim minority concentrated in Myanmar’s western state of Rakhine, the Rohingya have been deemed dangerous interlopers from neighboring Bangladesh. Today, they are mostly stateless, their very identity denied by the Buddhist-majority Myanmar state.

“There is no such thing as Rohingya,” said U Kyaw San Hla, an officer in Rakhine’s state security ministry. “It is fake news.”

Such denials bewilder Mr. Kyaw Min. He has lived in Myanmar all of his 72 years, and the history of the Rohingya as a distinct ethnic group in Myanmar stretches back for generations before.

Now, human rights watchdogs warn that much of the evidence of the Rohingya’s history in Myanmar is in danger of being eradicated by a military campaign the United States has declared to be ethnic cleansing.

Since late August, more than 620,000 Rohingya Muslims, about two-thirds of the population that lived in Myanmar in 2016, have fled to Bangladesh, driven out by the military’s systematic campaign of massacre, rape and arson in Rakhine.

In a report released in October, the Office of the United Nations High Commissioner for Human Rights said that Myanmar’s security forces had worked to “effectively erase all signs of memorable landmarks in the geography of the Rohingya landscape and memory in such a way that a return to their lands would yield nothing but a desolate and unrecognizable terrain.” 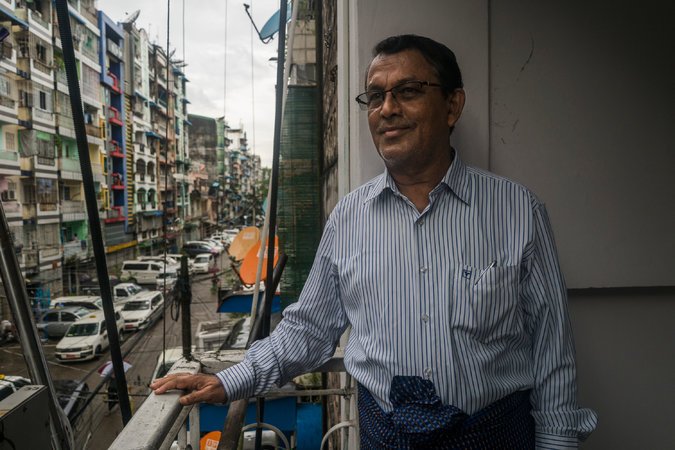 “The Rohingya are finished in our country,” said U Kyaw Min, a former schoolteacher and the president of the Democracy and Human Rights Party. “Soon we will all be dead or gone.”
Credit Adam Dean for The New York Times

“The Rohingya are finished in our country,” said Mr. Kyaw Min, who lives in Yangon, the commercial capital of Myanmar. “Soon we will all be dead or gone.”

The United Nations report also said that the crackdown in Rakhine had “targeted teachers, the cultural and religious leadership, and other people of influence in the Rohingya community in an effort to diminish Rohingya history, culture and knowledge.”

“We are people with our own history and traditions,” said U Kyaw Hla Aung, a Rohingya lawyer and former political prisoner, whose father served as a court clerk in Sittwe, the capital of Rakhine.

“How can they pretend we are nothing?” he asked.

Speaking over the phone, Mr. Kyaw Hla Aung, who has been jailed repeatedly for his activism and is now interned in a Sittwe camp, said his family did not have enough food because officials have prevented full distribution of international aid.

Myanmar’s sudden amnesia about the Rohingya is as bold as it is systematic. Five years ago, Sittwe, nestled in an estuary in the Bay of Bengal, was a mixed city, divided between an ethnic Rakhine Buddhist majority and the Rohingya Muslim minority.

But since sectarian riots in 2012, which resulted in a disproportionate number of Rohingya casualties, the city has been mostly cleared of Muslims. Across central Rakhine, about 120,000 Rohingya, even those who had citizenship, have been interned in camps, stripped of their livelihoods and prevented from accessing proper schools or health care. 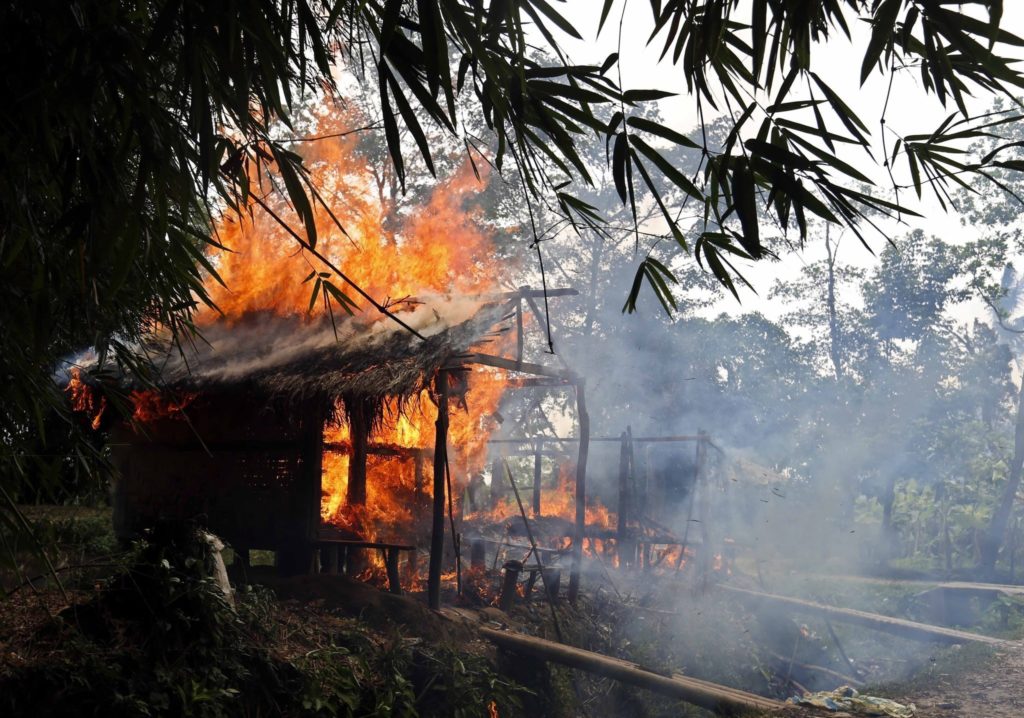 They cannot leave the ghettos without official authorization. In July, a Rohingya man who was allowed out for a court appearance in Sittwe was lynched by an ethnic Rakhine mob.

The Jama mosque now stands disused and moldering, behind barbed wire. Its 89-year-old imam is interned.

“We have no rights as human beings,” he said, asking not to use his name because of safety concerns. “This is state-run ethnic cleansing and nothing else.”

Sittwe’s psyche has adapted to the new circumstances. In the bazaar recently, every Rakhine resident I talked to claimed, falsely, that no Muslims had ever owned shops there.

Sittwe University, which used to enroll hundreds of Muslim students, now only teaches around 30 Rohingya, all of whom are in a distance-learning program.

“We don’t have restrictions on any religion,” said U Shwe Khaing Kyaw, the university’s registrar, “but they just don’t come.”

Mr. Kyaw Min used to teach in Sittwe, where most of his students were Rakhine Buddhists. Now, he said, even Buddhist acquaintances in Yangon are embarrassed to talk with him. 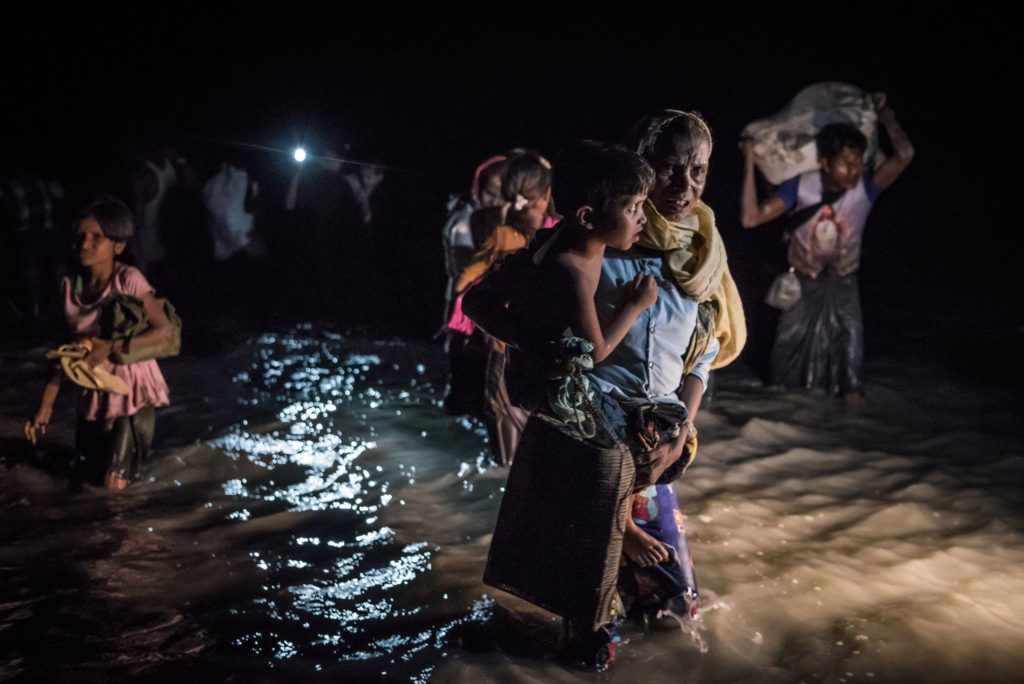 Rohingya refugees arriving in Bangladesh across the Naf River, in September.
Credit Sergey Ponomarev for The New York Times

“They want the conversation to end quickly because they don’t want to think about who I am or where I came from,” he said.

In 1990, Mr. Kyaw Min won a seat in Parliament as part of a Rohingya party aligned with the National League for Democracy, Myanmar’s current governing party. But the country’s military junta ignored the electoral results nationwide. Mr. Kyaw Min ended up in prison.

Rohingya Muslims have lived in Rakhine for generations, their Bengali dialect and South Asian features often distinguishing them from Rakhine Buddhists.

During the colonial era, the British encouraged South Asian rice farmers, merchants and civil servants to migrate to what was then known as Burma.

Some of these new arrivals mixed with the Rohingya, then known more commonly as Arakanese Indians or Arakanese Muslims. Others spread out across Burma. By the 1930s, South Asians, both Muslim and Hindu, comprised the largest population in Yangon.

The demographic shift left some Buddhists feeling besieged. During the xenophobic leadership of Gen. Ne Win, who ushered in nearly half a century of military rule, hundreds of thousands of South Asians fled Burma for India.

Rakhine, on Burma’s western fringe, was where Islam and Buddhism collided most violently, especially after World War II, during which the Rakhine supported the Axis and Rohingya the Allies. 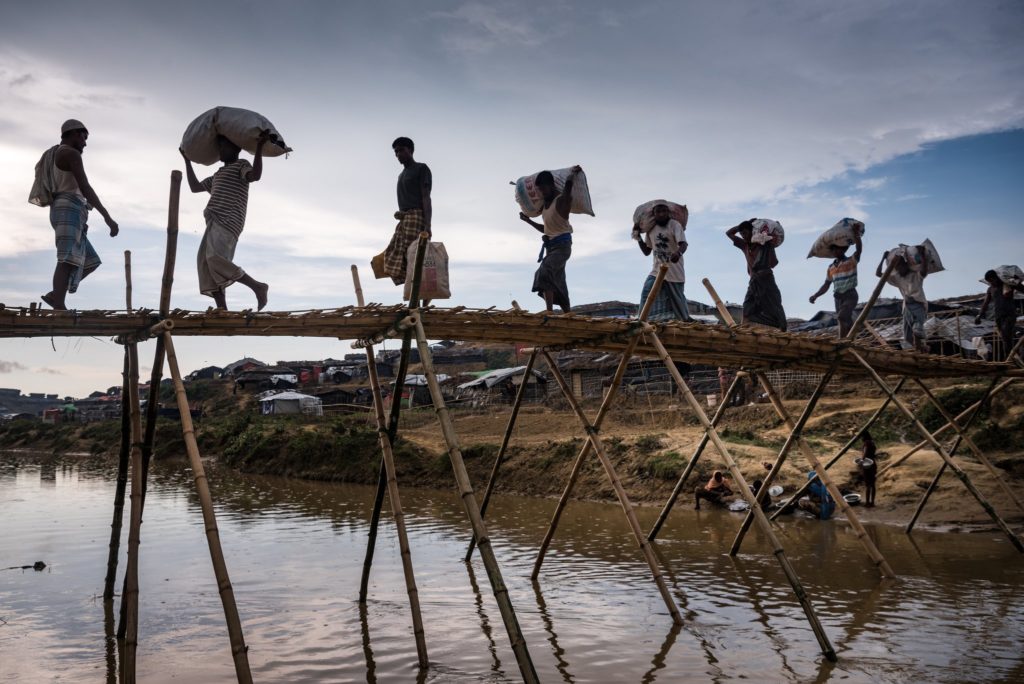 Rohingya crossing a makeshift bridge in the Kutupalong refugee camp, outside Cox’s Bazar in Bangladesh.
Credit Sergey Ponomarev for The New York Times

Later attempts by a Rohingya insurgent group to exit Burma and attach northern Rakhine to East Pakistan, as Bangladesh was then known, further strained relations.

By the 1980s, the military junta had stripped most Rohingya of citizenship. Brutal security offensives drove waves of Rohingya to flee the country.

Today, far more Rohingya live outside of Myanmar — mostly in Bangladesh, Pakistan, Saudi Arabia and Malaysia — than remain in what they consider their homeland.

Yet in the early decades of Burma’s independence, a Rohingya elite thrived. Rangoon University, the country’s top institution, had enough Rohingya students to form their own union. One of the cabinets of U Nu, the country’s first post-independence leader, included a health minister who identified himself as Arakanese Muslim.

Even under Ne Win, the general, Burmese national radio aired broadcasts in the Rohingya language. Rohingya, women among them, were represented in Parliament.

U Shwe Maung, a Rohingya from Buthidaung Township in northern Rakhine, served in Parliament between 2011 and 2015, as a member of the military’s proxy Union Solidarity and Development Party. In the 2015 elections, however, he was barred from running.

Hundreds of thousands of Rohingya were disenfranchised in those polls.

Mr. Shwe Maung’s electoral district, which had been 90 percent Rohingya, is now represented by a Rakhine Buddhist.

In September, a local police officer filed a counterterrorism suit accusing Mr. Shwe Maung of instigating violence through Facebook posts that called for an end to the security offensive in Rakhine. (The military operation began after Rohingya militants besieged government security posts in late August.)

Mr. Shwe Maung, the son of a police officer himself, is in exile in the United States and denies the charges.

“They want every Rohingya to be considered a terrorist or an illegal immigrant,” he said. “We are much more than that.”

Hannah Beech has been the Southeast Asia bureau chief for The Times since August 2017. She covers more than 10 countries in a region with some of the world’s fastest growth rates and largest tracts of rainforest and spiciest cuisine, as well as a growing collection of strongmen governments. She lives in Bangkok, Thailand.

A version of this article appears in print on December 3, 2017, on Page A6 of the New York edition with the headline: Myanmar Threatens to Wipe Rohingya From Memory.