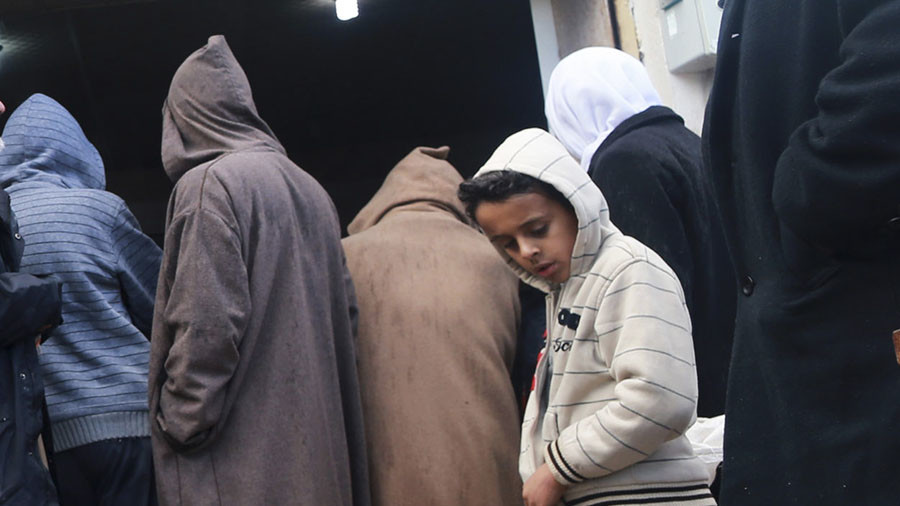 1 Dec 2017 – The reports that black Africans are being sold at slave markets in ‘liberated’ Libya for as little as $400 is a terrible indictment of the so-called ‘humanitarian intervention’ carried out by NATO to topple the government of Muammar Gaddafi in 2011.

In March 2011 virtue-signaling Western ‘liberal’ hipsters teamed up with hardcore neocon warmongers to demand action to ‘save’ the Libyan people from the ‘despotic’ leader who had ruled the country since the late 1960s. “Something has to be done!” they cried in unison.

Something was done. Libya was transformed by NATO from the country with the highest Human Development Index in the whole of Africa in 2009 into a lawless hell-hole, with rival governments, warlords and terror groups fighting for control of the country.

Under Gaddafi, Libyans enjoyed free health care and education. Literacy rates went up from around 25 percent to almost 90 percent. A UN Human Rights Council report on Libya from January 2011, in which member states praised welfare provision, can be read here.

It was clear that while there were still areas of concern the country was continuing to make progress on a number of fronts.

In the Daily Telegraph – hardly a paper which could be accused of being an ideological supporter of the Libyan Arab Jamahiriya – Libya was hailed as one of the top six exotic cruise ship destinations in June 2010.

Libya before and after US & UK given "freedom" pic.twitter.com/dpiZ8Qy8JV

Cruise ships don’t have Libya on their itineraries today. It’s far too dangerous.

The only surprising thing about the return of slave markets (and it’s worth pointing out that before the CNN report, the UN agency, IOM also reported on their existence in Libya earlier this year) is that anyone should be surprised by it. Human rights and social progress usually go back hundreds of years whenever a NATO ‘humanitarian’ intervention takes place. And that’s not accidental. The ‘interventions,’ which purposely involve heavy bombing of the country’s infrastructure and the subsequent dismantling of the state apparatus are designed to reverse decades of social progress. The ‘failure to plan’ is actually the most important part of the plan, as my fellow OpEdger Dan Glazebrook details in his book Divide and Destroy – The West’s Imperial Strategy in an Age of Crisis.

Libya was targeted, like Yugoslavia and Iraq before it, not because of genuine concerns that ‘another Srebrenica’ was about to take place, (note the House of Commons Foreign Affairs Select Committee report of September 2016 held that ‘the proposition that Muammar Gaddafi would have ordered the massacre of civilians in Benghazi was not supported by the available evidence’) but because it was a resource-rich country with an independently-minded government which operated a predominantly state-owned socialistic economy in a strategically important part of the world.

Neither Libya, Iraq or Yugoslavia did the bidding of the West’s endless war lobby, which is why they were earmarked for destruction. The chaos which routinely follows a NATO regime change op is a ghastly experience for the locals, who see their living standards plummet and their risk of violent death in a terrorist attack greatly increase, but great for rapacious Western corporations who then move in to the ‘liberated’ country en masse, taking advantage of the lack of a strong central authority.

Of course, this is never mentioned in NATO-friendly media. The role of the Western elites in turning previously functioning welfare states into failed states is missing from most mainstream reports on the countries post ‘liberation.’

In his recent piece for FAIR, journalist Ben Norton noted how reports

“overwhelmingly spoke of slavery in Libya as an apolitical and timeless human rights issue, not as a political problem rooted in very recent history.”

The dominant narrative is that slave markets have re-emerged in Libya ‘as if by magic,’just like Mr. Benn’s shopkeeper. The country’s ’instability’ is mentioned, but not the cause of that instability, namely the violent overthrow of the country’s government in 2011 and the Western backing of extremist, and in some cases blatantly racist, death squads. Everyone is blamed for the mess except the powerful, protected people and lobbyists who are ultimately responsible.

The French government played a leading role in the destruction of Libya in 2011, yet today the French president, the ‘progressive’ Emmanuel Macron blames ‘Africans’ for the country’s slavery problem.

Macron, like other Western leaders, wants us to see the slavery issue in close-up, and not in long-shot. Because if we do, NATO comes into the picture.

There is similar whitewashing over Iraq and the rise of ISIS. Again, we are supposed to regard the group’s emergence as “just one of those things.” But ISIS was not a force when the secular Baathist Saddam Hussein ruled Iraq; it only grew following his ousting and the chaos which followed the occupiers’ dismantling of the entire state apparatus.

The result of intervening in Libya has been "disappointing at the very least", says Observer leader, arguing against action in Syria. Balls.

Six-and-a-half years on, it’s revealing to look back at the things the cheerleaders for the ‘humanitarian intervention’ in Libya were saying in early 2011 and what actually happened as a result of NATO’s 26,500 sorties.

“The price of inaction is too high” was the title of one piece by David Aaronovitch in The Times, dated March 18, 2011. “If we don’t bomb Gadaffi’s tanks, Europe is likely to face a wave of refugees and a new generation of jihadis,” was the synopsis.

Guess what? The West’s military alliance did bomb Gaddafi’s tanks (and a lot more besides) and we got “a wave of refugees” of Biblical proportions and “a new generation of jihadis,” including the Manchester Arena bomber, Salman Abedi.

But there’s been no mea culpa from Aaronovitch, nor from his Times colleague Oliver Kamm – who attacked me after I had penned an article in the Daily Express calling for NATO to halt its action.

In the Telegraph, Matthew d’Ancona wrote a piece entitled ‘Libya is Cameron’s chance to exorcise the ghost of Iraq.’

In fact, the experience of Iraq should have led all genuine humanitarians to oppose the NATO assault. In many ways, as John Wight argues here,

Libya was an even worse crime than the invasion of Iraq because it came afterward. There was really no excuse for anyone seeing how the ‘regime change’ operation of 2003 had turned out, supporting a similar venture in North Africa.

Unsurprisingly the politicians and pundits who couldn’t stop talking about Libya in 2011 and the West’s ‘responsibility to protect’ civilians seem less keen to talk about the country today.

Libya and its problems have vanished from the comment pages. It’s the same after every Western ‘intervention’: saturation coverage before and during the ‘liberation,’ bellicose calls from the totally unaccountable neocon/liberal punditocracy for military action to ‘save the people’ from the latest ‘New Hitler,’ and then silence afterwards as the country hurtles back in time to the Dark Ages.

The ‘liberators’ of Libya have moved on to other more important things in 2017, with Russophobia the current obsession. Anything, in fact, to distract us from the disastrous consequences of their actions.