Many Palestinian refugees in the West Bank, Gaza, Lebanon and Jordan stand to suffer as a result of the massive aid cut to a U.N. agency helping them. 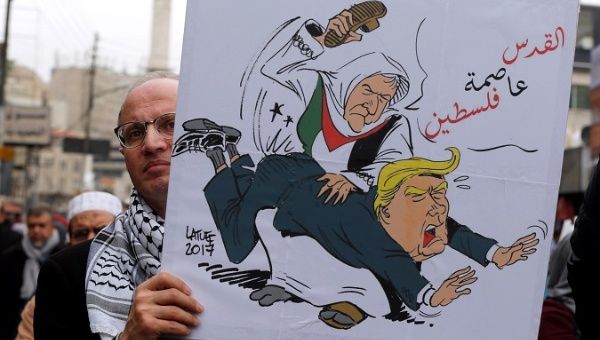 A man holds a placard during a protest against U.S. President Donald Trump’s recognition of Jerusalem as Israel’s capital, in Amman. | Photo: Reuters

6 Jan 2018 – The United States has frozen US$125 million in funding for a U.N. agency that provides aid to Palestinian refugees, Axios news site reported Friday [5 Jan 2017] citing Western diplomats who said the payment, a third of Washington’s annual contribution, was withheld pending a review into aid to the Palestinian government.

RELATED: Palestine Slams US ‘Blackmail,’ Says Jerusalem Not ‘For Sale’

The news comes just days after U.S. President Donald Trump threatened to withhold future aid payments to Palestinians. According to Axios the U.S. large donation to the United Nations Relief and Works Agency, known as UNRWA, was supposed to be delivered Jan. 1.

UNRWA spokesman Chris Gunness said the agency had not been “informed directly of a formal decision either way by the U.S. administration.”

The three unnamed Western diplomats who told Axios about the aid freeze said that “U.S. officials told U.N. officials in the last two days that President Trump is considering totally cutting the part of the funding which was frozen, and is even considering cutting up to US$180 million, which amounts to half of the U.S. funding to UNRWA.”

They further warned that such cut would be “catastrophic” for the organization, negatively impacting Palestinians living in refugee camps in Gaza, the West Bank, Jordan and Lebanon whose livelihood depend on aid by UNRWA.

Despite denials by U.S. state department officials that the aid has been frozen, the diplomats added that U.N. Secretary General António Guterres “has already spoken with senior U.S. officials about the UNRWA funding and also consulted with foreign ministers from other donor countries.”

A U.S. State Department official, who spoke to Reuters on condition of anonymity, said: “That [Axios] story is very misleading. Just because they were expecting the money on the first, and they did not get it at that time, does not mean it was suspended or canceled. Deliberations are ongoing, and we have until mid-January to make a final decision.”

Earlier this week Trump said on Twitter that his government should stop the aid to the Palestinian government and to the U.N. aid agency because they are “no longer willing to talk peace” with Israel.

Both Trump and Israel have accused UNRWA as well as the whole U.N. of being biased against Tel Aviv in favor of Palestine. But critics of such claims point to the fact that Israel’s Western allies are permanent members of the U.N. Security Council who have the power to veto any binding resolutions against Israeli occupation and human rights abuses.

Trump has been ramping up his blackmail tactics as part of his policy on the Israeli-Palestinian conflict. Last month when the U.N. General Assembly held a vote on a resolution against his controversial decision to recognize Jerusalem as Israel’s undivided capital, he threatened ahead of the vote that he would cut aid to countries that vote against the U.S. and in favor of the resolution. Despite his threats, 128 nations voted in favor of it.

The Palestinians have repeatedly rejected Trump’s blackmail against them and against their allies. “We will not be blackmailed … Palestinian rights are not for sale.” Dr. Hanan Ashrawi, Executive Committee Member at the Palestinian Liberation Organization had said earlier this week responding to the aid cut threat.

Regarding his earlier threat against the U.N. resolution vote she warned Trump that “Extortion is the most effective way for the U.S. to isolate itself even further and to weaken its influence and standing globally. We will not be deterred or intimidated.”

Trump’s blackmail tactic is becoming a defining strategy of his foreign policy as just a day ago he announced cutting US$255 million in security aid to U.S. ally Pakistan until “the government takes decisive action” against terrorist groups.