Death at the Gate in Afghanistan

Kabul, January 2017 – The number of visitors passing through the Afghan Peace Volunteers’ (APVs’) Borderfree Nonviolence Community Center in Kabul is incredible. Each afternoon, nearly sixty high-school-age students attend free classes to prepare them for the rigorous KanKor test, required of every Afghan desiring to attend public university. By 8:00 this morning, women from neighboring districts had begun arriving on foot, by taxi, or on bicycle, bringing hand-sewn duvets which the young APV’s will distribute to the city’s poor. There is no sign on the door; the address is not published; there is no central telephone number. And yet they come.

Almost immediately following lunch this afternoon, a young university student arrived, bringing unexpected news concerning the recent bombing of a Shia cultural center which had killed 45 people and injured many more. Well-dressed in jeans and warm sweater, he told us that three female relatives had been at the center at the time of the blasts. Two had been killed; the other was expected to recover. A fourth victim, the young man’s friend, had also perished.

As always happens when news of this sort arrives, the room went quiet. Each of the young women and men turned aside and wondered, in the words of our guest, “When is my time going to come?” 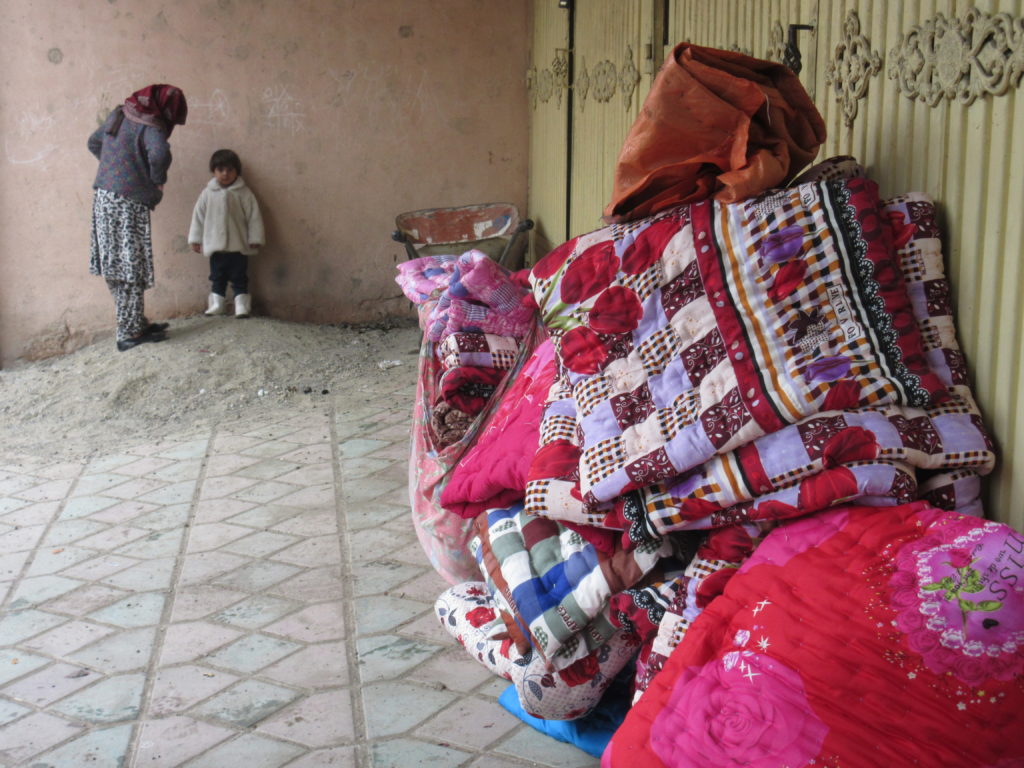 It has only taken a week, but I am beginning to realize just how intense life in Afghanistan is for each one of its 36 million citizens. Several times a week, in one guise or another, death walks through the gate.

How do Afghans react to the ongoing violence? In talking to young visitors to the Center, the impression is that the noose of fear is tightening. Friends tell us of thinking twice before going out on unnecessary excursions.

The insurgents whose only weapon is violence are clearly gaining sway here, but the Afghan Peace Volunteers are adamant in their knowledge that violence solves nothing. They struggle daily to practice and teach nonviolence, which their charter maintains “is a [personal] value and a way of living, relating, and acting,” a positive force for change in our own lives and in the life of our planet.

The world has moved on from Afghanistan. The ongoing conflict in this small nation has lost our interest. As I was departing from my first visit here, a 15 year-old friend said, “Goodbye, Mr. Ken. You are very brave to come here.” “No,” I replied. “You are the brave one. I can go home. You live here.”

In the borderfree world envisioned by the Afghan Peace Volunteers, we are all citizens of Afghanistan. We cannot let the noose be tightened any further.

For more information about the Afghan Please Volunteers, please visit their website: ourjourneytosmile.com.

Ken Hannaford-Ricardi has been representing Voices for Creative Nonviolence (vcnv.org) as a guest of the Afghan Peace Volunteers in Kabul.

Anticopyright: Editorials and articles originated on TMS may be freely reprinted, disseminated, translated and used as background material, provided an acknowledgement and link to the source, TMS: Death at the Gate in Afghanistan, is included. Thank you.