As Told by Wayne Dyer

A fifth grade teacher began her first day with a new class. All the students were neat and well behaved, except for Jack, a boy in the front row, who was slumped in his chair and seemed to need a bath. She felt annoyed by his lack of effort, and delighted in marking his papers all over with her red pen, giving him a big ‘F’, failure.

Now she understood. From then on she was more patient with Jack, focusing on what he did well instead of his shortcomings. She volunteered to tutor him after classes. For Christmas, all the children brought neatly wrapped gifts. Jack brought something wrapped clumsily in brown paper from a shopping bag. She opened it while the other children frowned and found a necklace with some missing gem stones, and half a bottle of perfume. She wore the necklace and put on some of the perfume. After school, Jack told her with a bright smile, “Today you smell just like my Mom.”

He became a medical doctor, and for his wedding, he asked his fifth grade teacher to take the place of his deceased mother. She wore the necklace and put on the perfume Jack had given her.

Jack told her, “Thank you for being so patient and encouraging, without you I would never have made it.” She said, “No, I must thank you, because you taught me how to teach.” 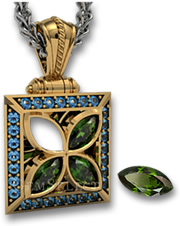 Anticopyright: Editorials and articles originated on TMS may be freely reprinted, disseminated, translated and used as background material, provided an acknowledgement and link to the source, TMS: Jack, is included. Thank you.