Protected Myanmar’s Genocide and Its Impact on Bangladesh 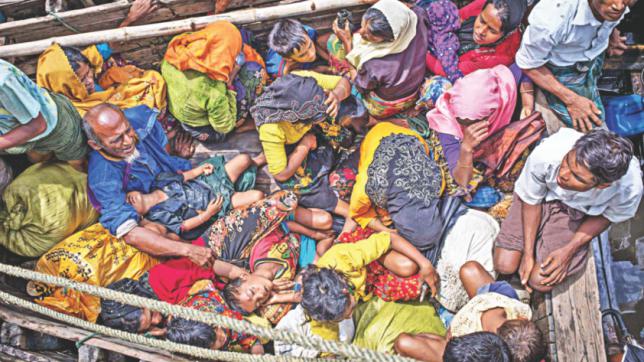 6 Jan 2018 – My recent op-eds in The Daily Star on Rohingya repatriation and resettlement sparked many responses from readers in Bangladesh as well as expatriate Bangladeshis. While most readers seemed to have liked my views and analysis of this complex issue and the stake involved in any hasty repatriation, others expressed mixed reactions to my proposal for third-country resettlement as an option and my remarks that relocation of refugees to Bashan Char would be a great mistake. It is difficult to fathom how the victims of genocide and ethnic cleansing can return to Myanmar anytime soon if the root causes of this carnage against humanity by the Myanmar military are not addressed in the first place.

According to all available reports, conditions are far from congenial for the return of Rohingya refugees due to the ongoing violence and wholesale destruction of villages. Despite this, a repatriation agreement between Bangladesh and Myanmar was signed on November 23, 2017 and the first batch of 450 refugees will return to Myanmar on January 22, 2018.

The returnees will live in camps like others—an estimated 120,000—who are living in squalid camps in Myanmar. There are no other details regarding the repatriation programme; for instance, whether they will be allowed to return to their original villages, when and how they will build their houses, when and how they will get back their lands/livelihoods, and whether their citizenship and basic rights are guaranteed under the repatriation agreement. For the returnee, this may drag out for generations.

It goes without saying that Bangladesh has shown to the world an unparalleled humanitarian gesture by stepping up and taking on such a huge burden. It was a major challenge and a real test for Prime Minister Sheikh Hasina who has been lauded internationally for her support to the Rohingya refugees.

However, the repatriation of close to a million refugees on a fast track without creating the requisite conditions and building confidence among the returnees raises serious doubts about the road ahead. It is very likely that the repatriation scheme will face many roadblocks on the way. Indeed, there are plenty of reasons for skepticism.

The announcement on December 28, 2017 by Myanmar of the 450 refugees’ repatriation allegedly without consultation with Bangladesh was not cause for celebration; on the contrary, the Bangladesh officials were caught off guard with the announcement. For Myanmar, the rush for repatriation is more symbolic to ward off international pressure on the country.

The details of the arrangement for repatriation are to be finalised in the first meeting of the Bangladesh-Myanmar Joint Working Group (JWG) in Naypyitaw around mid-January 2018. According to an official of the Rohingya Relief and Repatriation Commission (RRRC), Bangladesh would hand over a list of one lakh (100,000) refugees to the Myanmar representative at the JWG at the mid-January meeting. The returnees would be randomly picked without discrimination by religion, sex or age. The repatriation process may cause more tensions and dispute with regards to the returnees, i.e. who can return and/or considered ineligible as per the agreed verification procedures by Myanmar.

Ultimately, it should not surprise anyone if Myanmar refuses to take all refugees and/or it takes years to resolve this crisis. Therefore, the repatriation arrangements must be accompanied and monitored carefully by the UNHCR. The international community must also address in parallel the root causes of the crisis, and push for full implementation of the findings of the Annan Commission, including measures for reconciliation between the largely Buddhist and Rohingya communities. Bob Rae, the Canadian Rohingya envoy, has already raised the issues in his interim report to the Government of Canada.

In view of the above, it appears that there are many challenging tasks ahead, perhaps dating back to the first wave of Rohingyas (1978–1990) in Bangladesh. Many issues are very old and sensitive, and largely geo-political and economic in nature for countries in the region (China, Cambodia, Laos, Vietnam and the Philippines). This reality was truly reflected when these countries, including Russia, joined Myanmar in voting against the UN resolution calling Myanmar to allow access to aid workers, ensure the return of all refugees, grant full citizenship rights to Rohingyas, and appointment of a UN special envoy for Myanmar. Since the UN system appears to have failed to resolve the crisis, Bangladesh must engage in serious diplomacy and dialogue with China, India and other East Asian countries to solve the problem.

For Bangladesh, the repatriation of the Rohingya refugees with dignity and full citizenship rights remains the only viable solution, but the circumstances surrounding the Rohingya crisis do not look promising for them to safely return to their homeland anytime soon and rebuild their future. Meanwhile, the Rohingyas need protection and support in the refugee camps in Cox’s Bazar. The government, instead of dumping USD 280 million for infrastructure development on an offshore and uninhabited island named Bashan Char for refugee relocation, can invest the money for improving the precarious conditions of the existing camps. The refugees need better shelter (instead of tarpaulin and bamboo shacks), drinking water, sanitation, roads, schools, and more support and services in those rough makeshift camps.

Relocation to Bashan Char of 100,000 Rohingya refugees, which is one-tenth of the total refugee population, is not going to help resolve issues like lack of space for resettlement, or minimise conflicts between Bangladeshis and Rohingyas, as claimed by the government. Relocation of refugees to this isolated island, I am afraid, would eventually lead to a situation resembling a detention camp for refugees. Many UN agencies as well as Human Rights Watch have already condemned this proposal as it would deprive the refugees of their rights to freedom of movement; this will also constitute violation of Bangladesh’s obligations under international human rights laws. Relocation to Bashan Char is a terrible idea and should be abandoned altogether.

Finally, despite all good intentions and efforts, Myanmar will likely not accept all refugees for one or more reasons. This is very clear even today. Therefore, the government should take a three-fold approach to refugee repatriation and resettlement. The first approach is voluntary repatriation to Myanmar with full rights of citizenship. The second is third-country resettlement of refugees who are unable to return and/or refused re-entry by the Myanmar government. This will require harnessing sympathy from countries such as Australia, Canada, and other European countries for resettlement of refugees on humanitarian grounds. Other potential countries for Rohingya resettlement may include Malaysia, Indonesia, Saudi Arabia, Kuwait, Qatar and the United Arab Emirates. Third, the government should seek help from donor countries in helping Bangladesh cope with the many Rohingyas who are likely to remain in camps in Bangladesh over the next several years.