Meanwhile, The Washington Post is asking why accounts belonging to sanctioned officials in Venezuela, Iran and Russia are “allowed” to remain online. 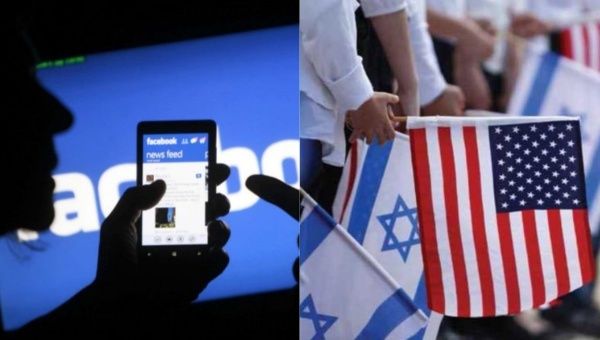 30 Dec 2017 – Facebook has been working with Israeli government officials to suppress Palestinian voices in the social media sphere according to a report published on Saturday in The Intercept. The partnership between the social media giant and officials in Tel Aviv has resulted in the censorship, removal or blocking of content deemed critical of the Israelis with these posting being branded as “incitement.”

The observations, which were made in an article by journalist Glenn Greenwald, come in light of a dramatic uptick in Israeli military repression toward Palestinian civilians in the aftermath of U.S. President Donald Trump’s recognition of Tel Aviv’s exclusive claims to the illegally occupied city of Jerusalem.

Facebook’s virtually unlimited acquiescence with Israeli requests to remove content, has been described as a “censorship rampage“ by Greenwald and have been carried out since Tel Aviv began blaming alleged, “online incitement” for unrest and resistance that overwhelmingly resulted in violence against Palestinian civilians. The hue and cry raised by Tel Aviv resulted in an arrangement between Facebook and the Israeli state, struck in Sept. 2016, that resulted in the creation of teams devoted toward the monitoring and removal of alleged “inflammatory content” criticizing the occupation.

The Facebook´s ban even extended to four editors of Shehab News Agency, a page with 6.3 million likes, and to three executives from Quds News Network, which has 5.1 million likes. The journalists and officals were barred from accessing their personal accounts on the basis of violating the site’s “community standards”.

“The concern is that Facebook is adopting Israeli policy and terminology when it comes to defining what incitement is,” Nadim Nashif, a co-founder of the Arab Centre for the Advancement of Social Media, told Al Jazeera at the time.

In a statement, a Facebook spokesperson cited the need to make the network a “safe” space: “We want people to feel safe when using Facebook, and for that reason, we’ve developed a set of community standards which make it clear there is no place for terrorists or content that promotes terrorism on Facebook.”

Meanwhile, the journalist added, Palestinians have virtually no opportunity to pressure the Israelis in reciprocal moves as widespread anti-Arab incitements for violence among Israeli netizens remains largely unhindered and undeterred by the social media giant.

Greenwald’s commentary was released as The Washington Post reported that Chechen President Ramzan Kadyrov had been barred from using Facebook-owned photo-sharing app Instagram, primarily because of U.S. sanctions. The article continues to ask “why only” Kadyrov was removed due to his inclusion on the sanctions list, naming other officials who could be barred from the social network such as Venezuelan President Nicolas Maduro, Iranian General Qassem Soleimani and various Russian officials. The Post is owned by Amazon.com founder Jeff Bezos.

Earlier this week, the Twitter account belonging to imprisoned Palestinian teenage girl Ahed Tamimi was inexplicably deleted following her arrest and imprisonment by Israeli authorities. The deletion came as hashtags calling for her release were trending across the globe, raising suspicions that Twitter, too, was acting in accordance with Tel Aviv’s demands.

“One can create a fantasy world in one’s head if one wishes, in which Silicon Valley executives use their power to protect marginalized peoples around the world by censoring those who wish to harm them,” Greenwald noted.

“But in the real world, that is nothing but a sad pipe dream. Just as governments will, these companies will use their censorship power to serve, not to undermine, the world’s most powerful factions.”