Trump’s Racism toward Haiti Is Not an Aberration 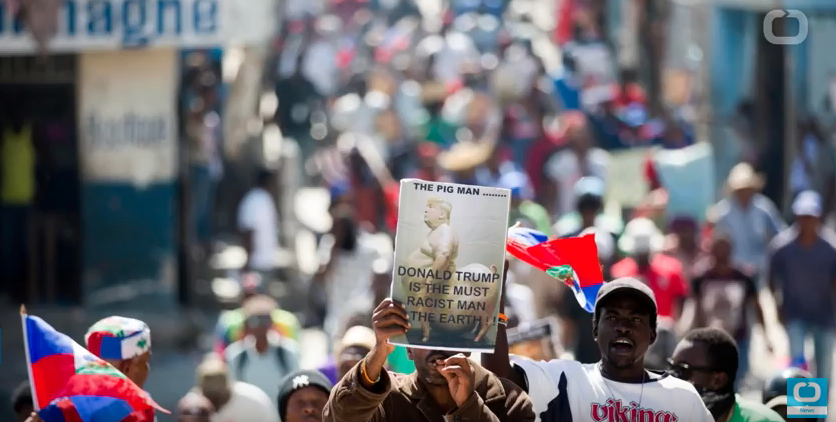 On January 22, thousands in Haiti’s capital protested vulgar comments made by Donald Trump about the nation. Wochit News YouTube

24 Jan 2018 – Trump’s racist comments about Haiti and African countries—made January 11 on the eve of the eighth anniversary of the terrible earthquake in Haiti—were vulgar and unacceptable, but they are not an aberration. Rather they reflect the reality of U.S. policy toward so-called “underdeveloped” black and brown nations.

In the wake of Trump’s comments, politicians and media figures rushed to defend Haitian and African immigrants, asserting how hardworking they are; what unique, important contributions they make to America; and reminding us of the hackneyed fallacy that “America was built by immigrants.” By reasoning on these grounds, commentators allow Trump and those with similar anti-immigration rhetoric to dictate the terms of the argument.

U.S. policy toward Haiti has been consistently racist, violent, oppressive, and exploitative. Trump’s particularly crude brand of racism is only the most recent manifestation of timeworn, bipartisan discrimination against black and brown people.

The exclusion of Haiti by the United States began with the Haitian Revolution, more than 200 years ago. Between 1791 and 1810, more than 25,000 whites and free blacks who supported the old regime fled the island to port cities like New Orleans and Philadelphia, sparking an early American refugee crisis. The free black migrants were viewed with suspicion by slaveholding politicians, including President Washington and his Secretary of State, Thomas Jefferson.

Trump’s particularly crude brand of racism is only the most recent manifestation of timeworn, bipartisan discrimination against black and brown people.

After Haiti defeated France in 1804, President Jefferson refused to give the new nation diplomatic recognition. France’s coffers were drained by years of war to preserve its most valuable colony, and Jefferson exploited this opportunity by acquiring the Louisiana Territory (stolen Native American land) for a song. The United States, predisposed to be conciliatory toward a fellow slave-holding nation, aided France and other European powers in implementing a diplomatic quarantine of the new black nation.

As noted by Robert Lawless in Haiti’s Bad Press and Paul Farmer in The Uses of Haiti, the United States prevented Haiti’s participation in the Western Hemisphere Panama Conference of 1825. U.S. slavery continued for more than half a century following its abolition in Haiti; it wasn’t until 1862 that the U.S. Government recognized Haiti’s independence.

Democratic President Woodrow Wilson, widely known as a racist, sent the U.S. Marines to invade Haiti in 1915. The Marines transported Jim Crow customs to the island, instituted forced labor, and massacred thousands of Haitians, all in the name of “stability.” In 1919, the troops murdered thirty-two-year-old Charlemagne Peralte, leader of the Cacos peasant movement that resisted the occupation. As a warning against continued rebellion, they attached his dead body to a wooden door for public display. Washington’s lasting legacy was the creation of the Haitian Army.

For decades after the official end of the nineteen-year-old occupation, dictators used the American-made army as an instrument of repression against the people.

The infamous dictator, François “Papa Doc” Duvalier, was given tens of millions of dollars by Washington during the first four years of his reign, which coincided with the Eisenhower Administration. In his book, An Unbroken Agony, Randall Robinson discusses how Papa Doc and his notorious Tontons Macoutes killed an estimated 50,000 people during his rule. Later on, in Paul Farmer’s words, JFK “provided the bloodthirsty killer with military assistance as part of the general program of extending US control over the security forces in Latin America.”

After Papa Doc died in 1971, U.S. support of the dictatorship under his son, Jean-Claude “Baby Doc” Duvalier, became even more entrenched. In the 1970s, both Haiti and El Salvador—another poor Latin American country maligned by Trump—were ruled by U.S.-backed regimes that violently repressed their populations, in order to ensure a submissive, cheap labor force for U.S. companies.

Under the repressive Duvalier dictatorship, which denied labor rights, the assembly sector proliferated in Haiti, and by 1980 the country became the ninth largest manufacturer of assembled goods for U.S. consumption.

Under the repressive Duvalier dictatorship, which denied labor rights, the assembly sector proliferated in Haiti, and by 1980 the country became the ninth largest manufacturer of assembled goods for U.S. consumption. Today, Haiti’s export economy is dominated by apparel manufacture—such as cheap clothes sold at Walmart, and even parts of U.S. military uniforms. More recently, after the earthquake, the State Department under Hillary Clinton pushed to build a new sweatshop in Haiti with money from USAID.

Even after the Haitian masses successfully ousted Baby Doc in 1986, the momentum of Duvalierism persisted, as the American-trained and -armed military continued its brutal terrorism against the people.

In the next two decades, Washington sponsored and actively participated in two coup d’états against the democratically elected governments of President Jean-Bertrand Aristide. Each resulted in years of violence and repression; each resulted in the killings of thousands of people; tens of thousands more were imprisoned without due process or were forced to flee their homes.

Soon after the first coup in 1991, President Bush ordered the Coast Guard to return refugees to Haiti. As a presidential candidate, Clinton denounced Bush’s handling of the crisis, but upon taking office he further extended the blockade. In a cynical move, he conveniently defined fleeing Haitians as “economic refugees,” in order to deny them political asylum.

In early 1992, acclaimed dancer Katherine Dunham went on a forty-seven-day hunger strike, urging George H. Bush to change U.S. policy toward Haitian refugees who, under his administration, were being held in deplorable conditions at the U.S. base on Guantanamo. Among other actions, a series of hunger strikes by students and faculty, as well as one by Randall Robinson that lasted nearly a month in 1994, were undertaken to pressure President Clinton to change U.S. policy toward Haitian refugees.

Many gains made under President Aristide’s second administration were reversed after the U.S.-led coup in 2004. The Aristide government, for the first time in Haiti’s history, implemented a universal schooling program. Between 1994 and 2000, more public schools were built in Haiti than during the entire period following the 1804 Revolution—195 primary schools and 104 high schools.

In 2001, Aristide mandated that 20 percent of the government budget go toward education. The aborted Aristide administrations also dedicated a greater percentage of the national budget on health care than any previous administration. His government advocated for improved labor rights and, in 2003, it doubled the minimum wage to 70 gourdes a day (about $1 today), affecting the livelihoods of more than 20,000 assembly factory workers.

But after the 2004 coup, many considered Haiti to be under a continued state of occupation. The country’s infrastructure steadily worsened over the next several years, and the 2010 earthquake was devastating. Far too many homes and lives were lost, and the Haitian people continue to suffer the consequences.

Obama’s response to the initial natural disaster was to send troops to Haiti. Let’s recall how the U.S. military held up thousands of tons of life-saving aid at the Port-au-Prince airport, since its first priority was to provide “stability.” Let’s remember, too, the stories and images—reminiscent of Hurricane Katrina—in which Haitians searching for food and supplies were depicted as “looters” or as members of “gangs.” But ultimately, perhaps, the more significant parallel between Katrina and the Obama Administration’s response to the earthquake is that the U.S. Government used reconstruction as a tool to aid the Haitian elite and multinationals.

If we consider Trump’s racism in the light of history, it is quite in keeping with that of his forty-four predecessors.

Black and brown immigrants do not have to prove their worth. When people try to defend them by asserting how hardworking and deserving they are, these assertions conveniently skirt around the looming truth that centuries of American and European colonialism, neocolonialism, and capitalist exploitation are responsible for the impoverishment that is so widespread amongst today’s black and brown nations. It’s as if a band of robbers looted a home, set it on fire, and then magnanimously defended the fleeing family’s right to sanctuary.

Additionally, the idea that “America was built by immigrants” conceals a larger, racist myth about the origins of this country. This country was built, in the first place, on genocide. It was built on stolen labor, on centuries of kidnap and the brutal separation of families, on the systematic oppression of the descendants of Africa.

It is not an accident that Trump mentioned Haiti and Africa together.

It is not an accident that Trump mentioned Haiti and Africa together; the exploitation of African nations and Haiti by the United States and European allies is historically inseparable. Haiti has always proudly identified with its African roots, and the Africa in Haiti is still evident today.

In order to forge strong, meaningful bonds of solidarity with movements in Haiti and Africa struggling to rebuild their nations, after centuries of exploitation, let’s model ourselves after Katherine Dunham, who understood that our ties to each other go far deeper than any man-made borders.

Nia Imara is an artist, an astrophysicist, and an activist working with the Haiti Action Committee.