5 Feb 2018 – The human child needs protective nurture which stretches from birth to at least teenage. The earliest part of this nurture – that is, the first few years after birth – provides to the child the innermost core of ‘identity’, including core values. A child’s eager young mind takes in whatever is offered by parents, teachers and other trusted adults. This is the ‘ABC’ of healthy childhood nurture.

Therefore a child’s basic belief systems and views are shaped primarily by the family, followed later by neighborhood, school and peer groups. The child’s views about ‘other groups’ in society are also formed during this period. All this is perfectly natural and normal.

Until the birth of the modern nation state, people lived in tribal groups. Commerce as well as skirmishes would have been common between tribes — but there was negligible inter-mixing between tribes. In those days, therefore, the tribe played a crucial role in shaping a child’s identity. Every person grew up as a member of a particular tribe, in a natural manner.

India provides an excellent case study. In India today, if ‘tribe’ is taken to subsume ‘caste’, then ‘tribe’ definitely continues to play a crucial role. Members of a tribe may be scattered all over the country, but modern means of communication and transport help in bridging the distances. Occasions such as a marriage, a major festival, or a death in the family bring people together on a regular basis.

In the modern world, economically defined ‘class’ also plays a big role in defining a person’s identity. Therefore we may use the word ‘tribe’ with this broader meaning of ‘identity group’ — subsuming both ‘caste’ and ‘class’.

We can therefore say that ‘culture’ and ‘nurture’ have always been closely intertwined. Indeed, we may go further and suggest that ‘culture’ divorced from ‘nurture’ loses its connection to the life-sustaining powers of Mother Earth.

A question arises naturally in this context: What role does the ‘tribe’ or ‘identity group’ have in the modern society?

A modern nation state is made up of a constitution, laws, and the various arms of the government — typically, the legislature, the executive branch and the judiciary. A citizen’s behavior in the public domain is assumed to be that of an ‘individual’ — or even ‘a rational individual’ or ‘homo economicus’.

A modern state is taken to mean: ‘So many individual citizens bound together by the laws of the state’.

The corresponding layers of the person’s identity are located outwards from the core, in that order.

Observe the behavior of a typical migrant from a poorer country to a wealthier one. The outer layer of the person’s identity is transformed fairly quickly, within a few weeks or months. But at the core the person retains the characteristics of the family and the ‘tribe’. That part of the identity has much deeper roots – and that is an integral part of being in a developed human society.

A person’s role in the family is very rightly considered a private matter. Unless there is a violation of the civil or criminal law within the family, no person should be forced to open to public scrutiny any private family matter. As the English used to say, ‘A man’s home is his castle’.

The next layer in a person’s identity is that which is owed to the ‘tribe’.

As noted above, there is nothing inherently wrong in the natural formation of a ‘tribe’, as broadly defined. Indeed, from the point of view of child nurture, this social grouping is essential.

Let us revert to the Indian example. A fishermen from southern India, a farmer from Uttar Pradesh, a musician from Goa, a carpenter from Rajasthan — these are examples of productive members of society who derive an important element of their identity from their ‘tribe’. Each of them would have benefited from a nurturing environment until at least early teens. Education may take a talented youngster out to another, larger world — but only if he or she has received the needed nurture in earlier years.

Most of us have similarly grown up in a nurturing environment — and learning about deprived children is indeed a saddening experience.

Naturally, membership of a particular ‘tribe’ plays a huge role in how a person conducts himself or herself in public. But every ‘tribe’ also has its own myths, prejudices, inner dynamics and power relations. It is the author’s submission that this aspect of human behavior has not received the dispassionate attention it deserves today — when all the ‘tribes’ of the world have begun to interact, cooperate and compete with one another.

The earliest humans moved out — and then branched out — from a valley in East Africa. Over time, language and intelligence developed, and economies and cultures diversified — as every ‘tribe’ struggled to adapt to its own corner of the world. Today, all around the world, transportation and communication technology is bringing the ‘tribes’ back in contact with one another.

Human nature being what it is, different ‘tribes’ jostle every now and then for economic benefits, influence, power, and so on. After all, every tribe is justifiably concerned about the nurture of its children. Are there not sometimes arguments between neighbors?

Therefore some amount of ‘identity politics’ has to be present in any modern nation state. Indeed, no Indian in his or her right mind can deny its inevitability. Today we must paraphrase Ben Franklin and say, ‘Death, taxes and diversity are inevitable’.

At its core, jostling between ‘tribes’ is rooted in the bonds of concern every human being has with others of his or her own ‘tribe’. This is a natural consequence of human family life and child nurture. We must accept this as a fact of human life — not an aberration or ‘a fall from a higher ideal’.

Any mother will confirm that child nurture is governed by concern and love — not ‘a higher ideal’. Acceptance of this fact of life will provide a basis for better understanding of diversity in society.

Sadly, of course, things do sometimes go wrong. Jostling between ‘tribes’ can become intense and even ugly. There is then mistrust, fear and hatred amongst ‘tribes’, which can easily be exploited by the cunning. Sometimes the ‘political protection’ of a ‘tribe’ is cynically misused by powerful members of the ‘tribe’ to cover up their corrupt or criminal acts. 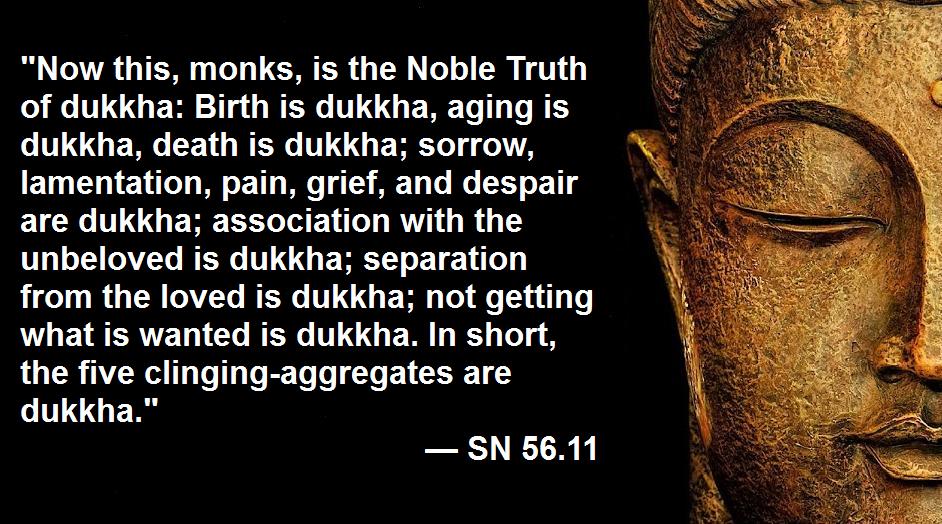 A great deal of misery — or dukkha, in Buddha’s words— is generated when ‘identity politics’ turns ugly, or when it is exploited to cover up criminal acts. We hope that better understanding of human nature will result in better handling of such behavior — and thereby a diminution of global dukkha.

In Buddha’s language, peace is nothing but absence of dukkha.

Clearly the word ‘Buddhist’ is no more than an identity, a label. Not every ‘Buddhist’ today may accept all of Gautam Buddha’s teachings. In fact Buddha’s irresistible appeal is to a thinking and compassionate individual. Therefore ‘tribes’ which reckon themselves to be ‘Buddhist’ can and do often get into worldly tangles involving extreme bitterness and even violence. Any reference to Buddha’s teachings here cannot absolve ‘Buddhists’ from their responsibilities towards human beings holding a different set of beliefs.

So where do we go from here?

What specific insights or hints can the above analysis provide towards conflict resolution and even conflict avoidance? Or, equivalently, how can we move towards peaceful coexistence?

The following approach seems to follow logically and naturally.

Some forms of dukkha are common to humanity, these being tied intimately to a human being’s and a family’s struggle for survival and fulfillment. Buddha said dukkha is a noble truth. There is no point in denying this truth and living in ‘La La Land’. Dukkha as a noble truth will be present in human life, regardless of how much modern technology grows in its sophistication.

The dukkha of family life must be faced by every family with love and wisdom, so that children are brought up right. Similarly, every individual and every family must face the dukkha which at times accompanies social interactions.

But another terrible form of dukkha is violent conflicts between societies or ‘tribes’. We should certainly hope to avert or resolve such conflicts. In this task, if Buddha’s insights can help us, then we should definitely rely on them.

To move towards peaceful coexistence, we must – as Buddha advised – identify the root causes of the dukkha of violent conflicts in the modern age.

Over the past couple of centuries, the West has harboured the extremely dangerous illusion of ‘conquest over nature’. The reality has in fact been that of incessant despoilment of nature and brutal exploitation of weaker societies.

It appears that many conflicts in poorer societies result from their ill-fated attempts to imitate ‘the West’ – to worship ‘false gods’, in other words. To this tragic tendency must be added the equally tragic fact that weaker societies get exploited as pawns by the stronger, wealthier and more cunning societies.

It would seem that the weaker societies getting hopelessly tangled up in deadly conflicts do not know that:

Perhaps we can follow the basic idea of cognitive therapy, which may involve explaining to the conflicting parties:

To paraphrase Gandhi: ‘An eye for an eye and a tooth for a tooth is making the whole world blind’. The true story of the human catastrophes of the previous two or three centuries, including the two world wars, must be kept clearly in mind.

The identity and traditions of every ‘tribe’ must be respected, and the respect must be reciprocal. Reciprocal hosting of ‘peace get-togethers’ can be arranged between conflicting parties. At such gatherings, differences can be aired and solutions sought – including the possible scope for commerce. The abstract ideal of ‘equality’ should not be hoisted upon the parties.

A ‘tribe’-based identity should not be seen as a sign of under-development. After all, armchair analysts in wealthy societies also end up forming their own ‘tribes’.  The so-called ‘global elites’ also form their own various ‘tribes’, whose wealth is based on usury, low-wage labour and corrupt trade.

‘Tribal leaders’ of simpler societies are seduced into joining so-called ‘global elites’, with the use of secret payoffs and photo-ops with ear-to-ear grins. The aim of the so-called ‘global elites’ is only to rob the weaker societies. This ugly truth of human nature must be exposed and shared with the people caught up in a deadly conflict. People of simpler societies must see through the shameless charade which is played out today in the name of ‘higher civilization’.

If the people involved in a conflict become wiser, it will become easier to resolve and even avert conflicts. Peaceful coexistence requires wisdom.

Dr. Naresh Jotwani is a semi-retired academic living in India. Apart from part-time engagements in engineering education and consulting, he engages in an in-depth, personal exploration of how Gautam Buddha’s profound discoveries and teachings can be applied to the acute problems of modern life. An earlier and shorter version of this article, under a different title, was published in Bhavan’s Journal, India.

Anticopyright: Editorials and articles originated on TMS may be freely reprinted, disseminated, translated and used as background material, provided an acknowledgement and link to the source, TMS: Identity and Peace, is included. Thank you.