The Polar Boom: Corporations Flock to Melting Arctic for Oil and Trade Routes 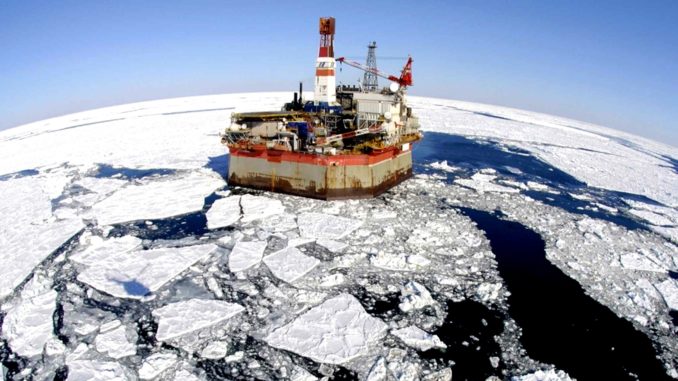 16 Feb2018 — As the global demand for fossil fuels rises and the Arctic sea ice continues to melt, multinational corporations and governments are deepening efforts to expand oil exploration and trade routes in the region. While corporations see a profit, environmentalists see a crisis.

Merely a couple of years after a Greenpeace-led global campaign managed to prevent the oil company Shell from drilling in the Northern Pole, the world’s two nations most responsible for global warming – China and the US – have announced plans that will further accelerate the agony of the Arctic.

On January 26, 2018 Beijing announced the opening of shipping routes in the Arctic for a type of a Polar Silk Road. That day, China’s vice Foreign Minister Kong Xuanyou revealed a report on his country’s new Arctic policy.

The high official explained that, “As a result of global warming, the Arctic shipping routes are likely to become important transport routes for international trade.”

According to the report, China is eyeing the development of oil, gas, mineral resources and other non-fossil energies, as well as fishing and tourism in the region, Russia Today explained, adding that Beijing vowed to work “jointly with Arctic states, while respecting traditions and cultures of the Arctic residents, including the indigenous peoples and conserving natural environment.”

“China, as a responsible major country, is ready to cooperate with all relevant parties to seize the historic opportunity in the development of the Arctic, to address the challenges brought by the changes in the region,” said China’s report.

RT related this news to the fact that the Asian giant has a major stake in the Russian Yamal liquefied natural gas (LNG) project, which is expected to supply China with 4 million tons of LNG per year.

“Drilling for Oil and Gas in the Arctic Is Inviting Disaster”

The previous month the Trump administration had approved a proposal to allow the first company, Eni SpA, an Italian oil business, to start exploratory drilling in the Arctic.

The Eni SpA oil giant plans to start drilling in the Arctic’s Beaufort Sea this December.

“They won’t yet be drilling at the depths BP was during Deepwater Horizon, but the potential for great harm exists nonetheless,” Terry Garcia explained in Newsweek. Garcia is the CEO of Exploration Ventures, and former Chief Science & Exploration Officer at National Geographic.

“Indeed,” he explained, “the same environmental factors that make spills more difficult to clean up also make them more likely to happen in the first place.”

“Dealing with these spills in this kind of environment requires knowledge, technical skill, and response capabilities that we simply do not have,” Garcia warned, adding that “more than 25 years after Exxon Valdez, there are still no known technologies for cleaning up oil from ice.”

“[I]imagine an oil disaster like Deepwater Horizon,” Garcia continued. “Same scenario—hundreds of thousands of gallons of oil gushing into the sea, every single day; people missing, presumed dead; the use of massive amounts of chemical dispersants to break down the oil and desperate attempts to contain and stop the unrestrained flow below the surface. […] The nearest Coast Guard station is nearly 1,000 miles away—and some of those miles are clogged with ice.”

In spite of the likely natural disasters it may usher in, China and other nations are rapidly moving forward with plans to profit off of the Arctic’s resources and possible trade routes.

Currently, two major Arctic routes are increasingly navigable in the summer. The Northwest Passage (Canada), which would save two weeks in travelling time versus the Panama Canal, and the Northern Sea Route (Russia), which is already in use by commercial ships.

Although the routes will not be open year-round, companies are already investing billions of dollars in tankers capable of going through ice.

The Arctic North-East passage offers China a faster sea route to many ports than the current routes using the Suez or Panama canals, according to the BBC .“The new route,” the BBc explained, “could take 20 days off the 48 days it currently takes to get to Rotterdam from China via the Suez Canal, estimates suggest.”

Meanwhile, Greenpeace’s Save the Arctic campaign warned that major companies like Shell and Exxon are making aggressive moves to usher in a new “oil rush” in the Arctic Ocean. In some places it has already begun.

According to Greenpeace, Russian oil giant Gazprom has already begun producing small amounts of oil from the Arctic in the ocean north of Russia.

Fragile Arctic ice and tricky weather conditions make a spill in the region even more likely, Greenpeace alerts, adding that in a review of Shell’s plans to drill in the

Alaskan Arctic Ocean, the U.S. Department of the Interior found that there’s a 75 percent chance of a major oil spill if an oil company finds oil and produces it.

“Even though the Department of Interior is taking the Arctic off the table for oil drilling for the next two years, it’s critically important that the region is closed to ALL new oil drilling forever,” explained Greenpeace.

This month, the Washington-based Worldwatch Institute reported that more than half of the Arctic Ocean was covered in year-round ice in the mid-1980s.

Today, the ice cap is much smaller, WI wrote, adding that alarming evidence of this warming trend was revealed recently when the U.S. National Aeronautics and Space Administration (NASA) shared satellite evidence that perennial Arctic ice cover, as of February, rests on less than 30 percent of the ocean.

“The rate of sea-ice loss we’re observing is much worse than even the most pessimistic projections led us to believe,” said Carroll Muffett, deputy campaigns director with Greenpeace USA.

Though such open waters point toward ecological catastrophe, oil and gas companies are excited at the prospect of new areas for fossil fuel extraction.

For example, Arctic Oil & Gas Corp., an exploration company, has claimed rights to extraction in the Arctic, and invited corporations from around the world to conduct further exploration for oil and gas in the region.

“It simply doesn’t get any bigger than this in the oil patch,” Arctic Oil & Gas Corp exploration company CEO Peter Sterling said.

However, Arctic Oil & Gas Corp. does not yet have official rights to its claim.

Development rights in the Arctic Ocean are heavily disputed between the United States, Russia, Canada, and Norway. As WI explained, “All four countries are debating how far their continental shelf extends into the ocean and therefore grants them rights to drill.”

As fossil fuel businesses and trade routes threaten to extend throughout the melting region, the Arctic’s crisis is deepening.

A 2016 report from the Stockholm Environment Institute warns that change in the Arctic is happening faster than ever. “This means the integrity of Arctic ecosystems is increasingly challenged, with major implications for Arctic communities and for the world as a whole,” the report explained. The main driver of these changes is human activity, “largely outside the Arctic.”

In July of 2016, Greenpeace reported that the Earth’s ice-covered polar regions critically keep the earth cooler, and are also home to fragile ecosystems that are already impacted by global warming.

“Climate change threatens diverse and abundant polar life that depends on ice, from polar bears and walruses to tiny krill. Melting ice sheets and glaciers are causing sea levels to rise,” Greenpeace stated. “Changes to polar climates pose a double threat. They directly affect polar life, but they also have important knock-on effects for climate systems all around the globe.”