Non governmental organizations play a role in the Western elites’ offensive against resistance to them. 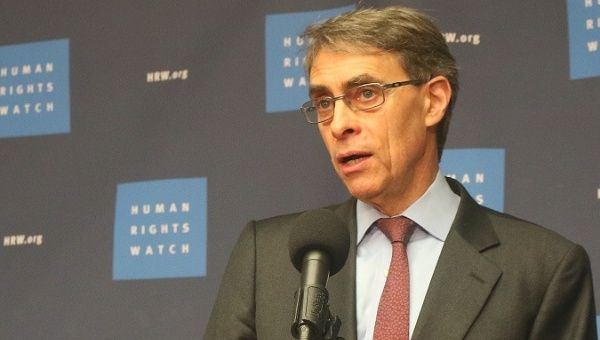 11 Mar 2018 – Making nonsense of Fukuyama’s premature triumphalist screed, it is commonplace now to note that the United States corporate elites and their European and Pacific country counterparts are increasingly losing power and influence around the world. Equally common is the observation that these Western elites and the politicians who front for them have acted over the last twenty years to reassert their control in their respective areas of neocolonial influence. The European Union powers have done so in Eastern Europe and Africa, most obviously but not only, in Ukraine, Libya, Ivory Coast, Mali and the Central African Republic. Likewise, the United States has acted to reassert its influence in Latin America and the Caribbean, effectively declaring war on Venezuela, maintaining its economic and psychological warfare against Cuba and intervening elsewhere with varying degrees of openness.

RELATED: Ken Roth’s Deep Devotion to US Empire Should Be Reported

Before they died, among the main Western media bogeymen were Fidel Castro, Hugo Chavez and Muammar al Gaddhafi. Now Vladimir Putin and Bashar al Assad have been joined by Xi Jinping and Nicolas Maduro. Along with these and other world leaders, Nicaragua’s Daniel Ortega has also constantly been the object of endlessly repetitive Western media hate campaigns. This longstanding, plain-as-day media strategy, regularly and blatantly prepares mass opinion to facilitate Western government aggression against the latest target government. No one following these processes with any attention will have failed to notice the leading role played by non governmental organizations in the Western elites’ offensive against resistance to them by political leaders and movements around the world.

In almost every case of recent Western provoked interventions, from Venezuela in 2002, through Haiti in 2004, Bolivia in 2008, Honduras in 2009, Ecuador in 2010, Ivory Coast, Libya and Syria in 2011, Ukraine in 2014, Western media have used deliberately misleading and downright deceitful reports from Western NGOs to support their own false misreporting of events. In Nicaragua’s case, the usual untrustworthy NGO suspects like Amnesty International, Transparency International and Global Witness constantly publish misleading reports and statements attacking or undermining President Daniel Ortega and his government. In general, their reporting is grossly biased and disproportionate given the regional context of incomparably horrific events and deplorable conditions elsewhere in Latin America, but, as often as not, it is also downright untrue.

In a recent example, Global Witness stated that Nicaragua’s proposed interoceanic canal “wasn’t preceded by any environmental impact reports, nor any consultation with local people”. Both those assertions are completely untrue. But this Big Lie repetition is the modus operandi of the Western elites who fund outfits like Global Witness, Amnesty International, and other influential NGOs like International Crisis Group and Transparency International. For example, Amnesty International claims “We are independent of any government, political ideology, economic interest or religion”. But it bears constant repetition that many of Amnesty International’s board and most of its senior staff responsible for the organization’s reports are deeply ideologically committed with links to corporate dominated NGO’s like Purpose, Open Society Institute, Human Rights Watch, and many others.

Also worth repeating is that Global Witness in 2016 received millions of dollars from the George Soros Open Society Foundation, Pierre Omidyar’s Omidyar Network, the Ford Foundation and NATO governments. The boards and advisory boards of these NGOs are all made up overwhelmingly of people from the Western elite neocolonial non governmental sector. Many have a strong corporate business background as well. All move easily from one highly paid Western NGO job to the next, serving NATO country foreign policy goals. Cory Morningstar has exposed the pro-NATO global political agenda of organizations like US based Avaaz and Purpose, noting “the key purpose of the non-profit industrial complex is and has always been to protect this very system it purports to oppose”.

Back in 2017 it was already a truism to note that Western NGOS “operate as the soft, extramural arm of NATO country governments’ foreign policy psychological warfare offensives, targeting liberal and progressive audiences to ensure their acquiescence in overseas aggression and intimidation against governments and movements targeted by NATO. To that end, they deceitfully exploit liberal and progressive susceptibilities in relation to environmental, humanitarian and human rights issues.” What is now becoming even more clear in the current context is that these Western NGOs and their media accomplices are confident enough to publish downright lies because reporting the facts no longer matters. Western public discourse has become so debased, incoherent and fragmentary that the truth is almost completely irrelevant. All that matters is the power to impose a version of events no matter how false and untruthful it may be.

This sinister media reality is intimately related to the politicization of legal and administrative processes in the national life of countries across Latin America. The spurious legal processes against Dilma Rousseff and Lula da Silva in Brazil, against Milagro Sala and Cristina Fernandez in Argentina, against Jorge Glas and, no doubt very soon, Rafael Correa in Ecuador are all based on the same faithless virtual association and complete disregard for factual evidence as Western media and NGO propaganda reports attacking Venezuela, Bolivia, Cuba and Nicaragua. It is imperative to overcome the ridiculous liberal presupposition that the region’s elites, with the advantage of designing and controlling their countries’ legal systems and communications media for over 200 years, are somehow going to respect high falutin’ avowals about “separation of powers”.

Note: this article borrows from previous articles here and here.