Stand Up for Justice & Peace, Not War! 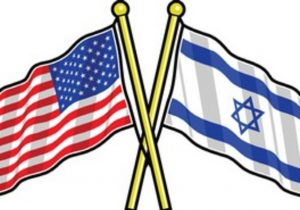 6 Mar 2018 – Both U.S. President Donald Trump and Israeli Prime Minister Benjamin Netanyahu are on the ropes, under criminal corruption investigations. What better way to take the focus away from themselves than by waging war, creating national emergencies to solidify their power, and have the finger pointed at someone else rather than themselves.

According to Colonel Lawrence Wilkerson, former Chief of Staff to U.S. Secretary of State Colin Powell and currently, a professor at the College of William and Mary, it all goes back to the chaos created by the U.S. ill advised and illegal U.S. invasion of Iraq in 2003 by the George W. Bush/Dick Cheney administration. Wilkerson says that U.S. invasion “destroyed the balance of power in the Gulf.” Besides destabilizing Iraq and producing ISIS, it set Persian against Arab, Sunni against Shia, etc. and escalated conflict throughout the region. The U.S. is responsible for creating the mess in the Persian Gulf and now it wants to add to the mess.

Americans need to remember that the CIA has publicly admitted it was behind the notorious 1953 coup against Iran’s democratically elected prime minister Mohammad Mosaddeq. Like the U.S. invasion of Iraq, it was all about oil, power and U.S. empire building. Today, Iran has established itself in a new position of power in the Persian Gulf. Lebanon and Syria are allies of Iran. French president, Emmanuel Macron, said: “The current rhetoric of the U.S., Saudi Arabia and Israel is pushing the region toward conflict with Iran.” Israel defense minister Avigdor Lieberman will speak in April in New York City at the annual conference of the Jerusalem Post. The title is, “The New War with Iran.” Syria or Lebanon could be flashpoints for war with Iran. Beware of possible ‘False Flag” triggering events. The escalation could be very swift toward global war. Colonel Wilkerson concludes that Israeli Prime Minister Netanyahu “is willing to do whatever he needs to do to get rid of whomever he thinks is threatening Israel to the last dead American.” For other motivating factors see these links: