Syria: It Would All Be Over by Now without the ‘Regime-Changers’ 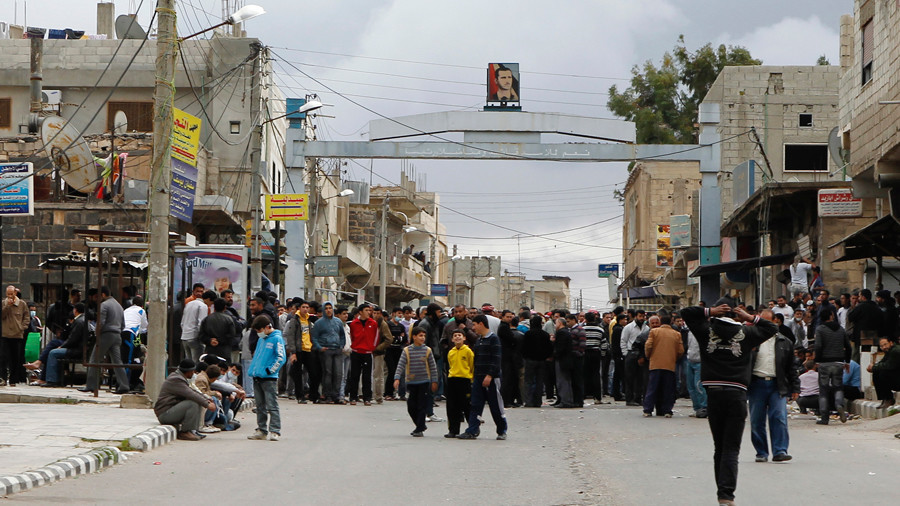 17 Mar 2018 – It was seven years ago this week that the conflict in Syria began. How might it have developed without the negative role played by Western powers and their regional allies?

Beware the Ides of March, the old saying goes. The 15th of March down the ages has seen not only the assassination of Julius Caesar and the Nazi invasion of Czechoslovakia; it was also the day, in 2011, that the conflict in Syria began.

According to the standard narrative, it was the intransigence and brutality of the Assad government (always referred to as a ‘regime’) that plunged Syria into chaos. But while it’s true that there was genuine discontent with the government for a number of valid reasons seven years ago, the divisions within Syria could have been overcome without much bloodshed, had certain countries not worked to sabotage any peaceful solutions to the crisis.

Faced with a direct threat to its rule, the Assad government showed it was willing to make compromises. As early as March 26, 2011, the BBC was reporting that the government had released more than 200 political prisoners. There were also amnesties announced in May and June.

Not only that but important political changes were introduced as Assad acknowledged in a televised address that demands for reform were legitimate.

In February 2012, a new constitution, which ended the Ba’ath Party’s 40-year monopoly of power, was overwhelmingly endorsed in a national referendum. Article 8 of the new constitution stated:

“The political system of the state shall be based on the principle of political pluralism, and exercising power democratically through the ballot box.”

But these democratizing measures, which went far further than any “reforms” made by the US/UK’s authoritarian ally Saudi Arabia, and which have been praised, were loftily dismissed by the West.

It may have only been in the summer of 2011 when Western leaders were openly declaring “Assad must go,” but the truth is that regime change had been on the agenda for a long time.

We know from WikiLeaks that as early as December 2006 US officials were discussing how to destabilize the Syrian government. A cable from US Ambassador to Syria William Roebuck discussed the “potential vulnerabilities” of the Assad administration and the “possible means to exploit them.”

One of the “possible means” was to seek to divide the Shia and Sunni communities in Syria. In a section entitled PLAY ON SUNNI FEARS OF IRANIAN INFLUENCE, the ambassador wrote:

“There are fears in Syria that the Iranians are active in both Shia proselytizing and conversion of, mostly poor, Sunnis. Though often exaggerated, such fears reflect an element of the Sunni community in Syria that is increasingly upset by and focused on the spread of Iranian influence in their country through activities ranging from mosque construction to business.”

The date of the cable is highly significant. 2006 was the year that Israel, the US’s closest ally in the region, went to war in Lebanon but despite its clear military superiority, didn’t succeed in defeating Hezbollah. If Israel was to succeed in the future, the Syrian-Hezbollah-Iran axis would have to be broken.

In a television interview, former French Foreign Minister Roland Dumas said that Britain had been preparing to send gunmen into Syria two years before the anti-government protests of 2011 and identified Syria’s “anti-Israel stance” as being critical.

Of course the US and its allies had to pretend that what they were really after in Syria was ‘democracy.’ But had they genuinely wanted this, they would have supported and encouraged Assad’s reforms and sided with opposition figures who wanted peaceful, democratic change and not an armed uprising. Instead they did all they could to escalate the crisis, flooding the country with arms and facilitating the influx of radical Islamist fighters from many other countries.

The Western intervention in Syria, in pursuance of violent regime change, has been massive.

“At $1 billion, Syria-related operations account for about $1 of every $15 in the CIA’s overall budget… US officials said the CIA has trained and equipped nearly 10,000 fighters sent into Syria over the past several years — meaning that the agency is spending roughly $100,000 per year for every anti-Assad rebel who has gone through the program.”

At the same time, attempts to solve the conflict diplomatically were repeatedly sabotaged by the insistence that ‘Assad must go’ and by stepping up support for anti-government forces. Take the Kofi Annan peace plan in 2012.

“Within days of Annan’s peace plan gaining a positive response from both sides in late March, the imperial powers openly pledged, for the first time, millions of dollars for the Free Syrian Army; for military equipment, to provide salaries to its soldiers and to bribe government forces to defect. In other words, terrified that the civil war is starting to die down, they are setting about institutionalizing it,” noted my fellow Op-ed contributor Dan Glazebrook in Al-Ahram Weekly.

The help given to ‘rebels’ looked to be tilting the conflict in the favor of the regime-changers. While Western leaders warned of the dangers of hardline Islamist terrorism at home, they welcomed the gains made by such groups in Syria. A declassified US intelligence report from August 2012 admitted that

“The Salafist, the Muslim Brotherhood, and AQI (al-Qaeda Iraq) are the major forces driving the insurgency in Syria.” The report said that “AQI supported the opposition from the beginning.” It also predicted the establishment of a “Salafist principality in Eastern Syria” and said that this is “exactly what the supporting powers to the opposition want, in order to isolate the Syrian regime.”

Russia’s lawful intervention in September 2015, in defense of secular Syria, where people of all religions could once again live in peace, proved to be a game-changer and helped push back the advances made by Islamic State (IS, formerly ISIS) and other radical terrorist groups. The war could have been brought to an end in 2016, had the US and its allies given up with their regime change obsession and allowed Syrian forces, aided by their allies, regain control of the whole country. But they didn’t.

In September 2016, with the ‘rebels’ on the back-foot, another ceasefire was agreed between then US Secretary of State John Kerry and his Russian counterpart, Sergey Lavrov.

Again it came to nothing. As I wrote here:

“While the S.A.A. [Syria Arab Army] had to halt its advances ‘rebels’ carried on with their attacks. In one 24-hour period Russian General Vladimir Savchenko said there had been no fewer than 55 rebel attacks, leading to the deaths of 12 civilians.”

And one week after the so-called ceasefire had started, US-led air raids ‘accidentally’ killed 62 Syrian soldiers at Deir ez-Zor. “From the very beginning there have been many of those, including in the US administration, seeking to break down these agreements,” lamented Lavrov. The fact is that the US hadn’t been serious about wanting an end to hostilities, and only wanted to use the ‘ceasefire’ as a cover for rearming/regaining ground.

But Aleppo was liberated and life slowly got back to normal. We’ve seen similar cries of “something must be done” by the regime-changers as Syrian forces move in to recapture rebel-held Eastern Ghouta. But interestingly the same people are, by and large, silent on the humanitarian catastrophe affecting Yemen. ‘Human rights’ only concern them when transgressions can be blamed on an ‘Official Enemy’ of the West.

“The way to save lives, I’ve sadly concluded, is to let [Syrian President Bashar] Assad win as quickly as possible. Aleppo was a charnel house in 2016. But now that it has fallen to Assad’s forces, pictures are circulating of civilians strolling through its rebuilt public park. It’s terrible that they have to live under Assad, but at least they’re alive. Tyranny is preferable to endless and useless war.”

But other regime-changers still prefer “endless and useless war” to an Assad victory and further democratic reforms. Unless that changes, the bloodshed will only continue.