At a time when there is a growth in many parts of Europe of a narrow nationalism often linked to xenophobia and violence, it is useful to look at the life of Charles Maurrras and what he called “integral nationalism”.  Maurras is in many ways the intellectual “godfather” of these narrow nationalist movements.

Charles Maurras, born of a French Republican father and a devotional Catholic mother, grew up in Martigues on the Mediterranean coast where its canals and  painted houses have given it the obvious name of the “Venise du Midi”.  He left Martigues when he was 17 to go to Paris for his studies – Paris offering more educational  possibilities than a small city.  However, he always retained a nostalgic vision of the south of  France and constantly described it through his childhood memories.

He wrote two early books which can still be read today Le Chemin de Paradis  in 1895, Le Chemin being the name of the street on which his parents lived.  The other book is Anthiméa which are his descriptions of Greece that he visited as a journalist to cover the first modern Olympic games in 1896. His Greece was of classic period ruins, not of Greeks going on with their daily lives. It must be noted that before he was 20, Maurras had a bad accident to his head which left him largely deaf.  He could speak, which he did at some length but was never an orator because he did not hear the sound of his voice.  He could not really hear what others were saying unless the person spoke loudly and just to him. He never entered into conversations.  Maurras was a writer who reflected on his own thought, which, once set around 1900, only repeated itself.

With his nostalgic view of the south of France, his early political views were decentralist, with an emphasis on strong local government and regional assemblies. He opposed the centralizing tendencies of the Third Republic created after the defeat of France to Prussia in 1871. He came to identify decentralization and local self-government with the practice of the French kings and Maurras became a “Royalist”.  He never stressed the fact that the French kings until Louis XIII allowed regional assemblies not out of ideological convictions but because they could not break the power of local nobles. Once Louis XIII and Louis XIV were able to centralize power in Paris, they did so with a vengence. 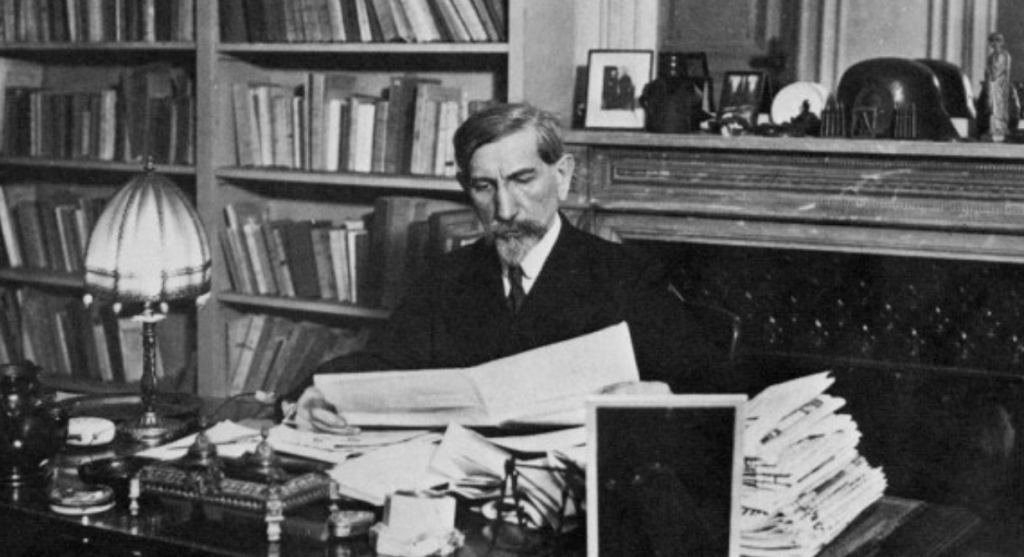 French nationalism at the turn of the century lacked a unified ideology other than “la revanche” against Germany. Nationalists were a negative grouping of various dissatisfied elements with mutually exclusive desires.  Despite the amount of nationalist sentiment and ferment, the nationalists had little organized  voice and no common ideology.  Maurras tried to give both through the daily newspaper l’Action Francaise  and associated groups such as a feminist league and especially the Paris student movement Les Camelots du Roi  who specialized in street fights in the university areas of Paris.

L’Action Francaise developed a real influence among Roman Catholic readers, many of whom felt themselves marginalized by the anti-clerical policies of the Third Republic. Maurras promoted the Church as a framework for order, although Maurras considered himself as a pagan of the Greek classic world. He maintained that Christianity was a Jewish plot to weaken and then replace the Greek gods.  The coming of Christianity was a step toward anarchy of which the Protestants were the chief representatives.  Maurass and l’Action Francaise were violently anti-Protestant and never failed to point out the number of Protestants in high civil service in the Third Republic.  He accused them of potential disloyalty in favor of ” Protestant Germany”. However, there were a greater number of anti-Jewish rather than anti-Protestant  readers, and anti-Jewish currents became strong.

Some Catholics started to worry about the strong influence of Maurras among Catholics. They thought that the Church was not only a framework for order but also a doctrine, some of which had to be believed, at a minimum that there was only one God. Thus in 1927, the Vatican placed a ban on any Catholic reading l’Action Francaise and on any Catholic writing for it or belonging to associations related to it. Many Catholics did drop away, but a few like George Bernanos continued writing for the newspaper, later writing that “Maurras was the man for whom we were denied the sacraments of the Church and a vision of death without the blessing of a priest.”” The ban was lifted in 1939 in a compromise.  Maurass stopped writing  that Christianity was a Jewish plot.  Maurass was elected to l’Academie Francaise, which had many conservative Catholic members.

Maurass would probably have continued living as a champion of integral nationalism with little electoral influence except tor the 1940 German invasion and the creation of the Vichy government. Since Maurass had not been able to restore the royalty, Marichal Pétain would have to do; Pétain’s ideology of Order, Family, Honor to the Military  and support of rural life was very close to the views of Maurras, though Pétain was never really part of l’Action Francaise.  The hard core of Pétain’s Vichy circle also did not come directly from L’Action Francaise.

Maurass moved the newspaper from Paris to Lyon which was originally part of “unoccupied France” governed from Vichy. Maurass always had a violent polemic style, calling on his followers to shoot their enemies in the back.  He continued his style calling upon the Germans to shoot the resistance  members and to take members of their family hostage.  However, the Germans had been able to think of that without the advice of Maurras.

Thus at the Liberation of France, Maurras was put on trial and sentenced to life in prison. He spent 1945 to 1952 in a prison which held especially political prisoners.  He continued to write his memoires and to keep in contact with some of the writers who had been part of lAction Francaise though most had died by then. He was released on medical grounds so that he could die at home.

We see that the events and personalities that bring an ideology of narrow nationalism to the fore are many. We who work for a cosmopolitan, humanist world society need to remain alert.

Anticopyright: Editorials and articles originated on TMS may be freely reprinted, disseminated, translated and used as background material, provided an acknowledgement and link to the source, TMS: Charles Maurras (20 Apr 1868 – 16 Nov 1952): The Long Road from Cultural Regionalist to Narrow Nationalist, is included. Thank you.