6 Apr 2018 – Once again, progressive forces have to redesign their means of struggle and their ideas for confronting the current regional political moment, writes Bruno Sgarzini of Mision Verdad. 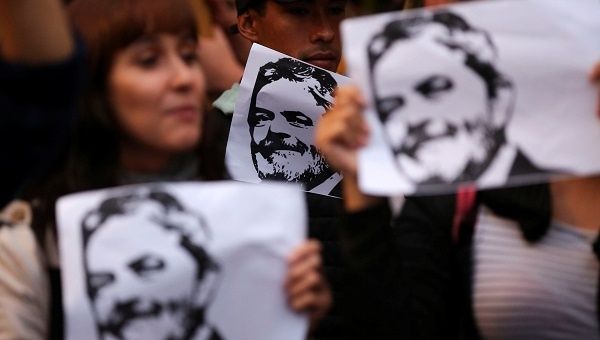 Lula was accused by Judge Sergio Moro of masterminding the corruption network under investigation in Operation Car Wash. | Photo: Reuters

Begun in the last years of Dilma Rousseff‘s first presidency, Operation Car Wash kept up its momentum using preventive detention; information coerced in exchange for concessions from prosecutors, and the threat of imprisonment at the appeal court level thanks to a 2016 Supreme Court decision.

These three coercive judicial measures against those accused extended the reach of the Car Wash investigation, the intensity of which was assisted by heated media coverage. All this took place as judicial authorities declared the investigation an exceptional operation “that need not abide by the country’s laws.”

With that mandate, prosecuting Judge Sergio Moro – together with the private media – accused Lula of masterminding the corruption network under investigation. Almost four years later, a spell of preventive detention and associated coercive incentives led the owner of the OAS construction company to claim Lula had received an apartment as a bribe. This was one of two pieces of evidence Moro used to condemn Lula to nine years in jail, the other being a bill of sale unsigned by Lula.

The Supreme Court ruled Lula should go to prison at the appeal court level once Moro’s ruling was confirmed. That avoided any attempt to question the jurisprudence involved, which contradicts both the Constitution and the penal code. The procedural future now rests in the hands of Moro, because the Supreme Court has provisionally protected one of the main coercive measures of the Car Wash investigation: namely imprisonment at the appeal court level.

Paradoxically, four years ago – when the investigation began – it was hard to foresee that a municipal judge, together with prosecutors and federal police advised by U.S. authorities, would manage to imprison the person they saw as their main enemy. Now a Netflix series has immortalized them and a court ruling has turned them into Lula’s executioner, as if they represent a super power beyond public accountability or even the Constitution.

In theory, Lula could be sent to prison over the next few days and from there present a new appeal to get out of jail. That’s the legal move analysts both right and left expect. However, it’s still unclear whether the electoral authority will apply the ‘Clean Slate‘ legal category that makes it impossible for any politician with a criminal record to stand as a candidate for election. The Supreme Court ruling suggests a judicial limitation that seems difficult for Lula to reverse in relation to the most essential thing in his political life: his presidential candidacy.

Even so, the possibility does exist that the law may allow Lula’s imprisonment to be overturned in the short term: several Supreme Court judges ruled against his motion for habeas corpus, but said they favored changing that decision should the principle itself come before the court. That possibility is blocked for now by Supreme Court President Carmen Lucia, but it could become an option when her term ends in September.

Should that happen, Lula – together with various politicians and businesspeople – could be set free, thus seriously limiting the Car Wash investigation amid severe displeasure among the political class against Sergio Moro and his colleagues, beginning with incumbent President Michel Temer himself.

Despite the Workers’ Party insisting they will continue with Lula’s candidacy to the bitter end, the reality is that his candidacy seems to have served as a means of applying pressure  to uncover the way Brazil is governed. In practice, Lula’s political leadership depends on the ups and downs of a community of interests who administer his future according to what they need. That being the case, Lula’s imprisonment has all the characteristics of being a deliberate provocation aimed at measuring how far social reaction will go. This raises some valid questions.

Is Lula’s imprisonment an attempt to avoid the transfer of his political capital to an eventual successor around whom his support can regroup? Is it an attempt to provoke a reaction on the streets that the Temer government can use as a pretext to extend a national state of emergency? Or maybe to provoke a situation of such tension between Lula’s supporters and the extreme right-wing to justify postponing the presidential elections on the pretext that conditions do not permit them to be held? However conspiratorial such questions may sound, they are fully pertinent in a context that is now both unpredictable and uncertain.

It is becoming less of a secret that operation Car Wash was brought about under the auspices of the U.S. State and Justice Departments via links with Sergio Moro, the Attorney General’s office and the federal police in charge of the investigation. Its most self-evident result has been to isolate the main political threat to the United States, namely the coalition of politicians – supported by the Workers’ Party – who favored strengthening Brazil’s multinational companies as global competitors.

The following categorical example sums this up. In 2014, the BRICS countries announced in Brazil an alternative financial system led by China and Russia. Today, Latin America’s biggest country is leading plans to sign a free trade agreement with the European Union and to converge with the Pacific Alliance, the market platform of U.S. corporations defeated back in 2005 by the region’s rejection of the Free Trade Area of the Americas. Curiously, the Brazilian government’s route map is the same one recommended by the Atlantic Council, regarded as NATO’s brain, funded by important Wall Street companies and banks.

However, what can be seen emerging from this operation is the capacity to shape a new Brazilian elite based on mining, soya and agro-industry; finance, and the more extreme wing of the armed forces, none of which threaten U.S. interests in the region. In addition, they are controlled by a gang of judges and prosecutors ready to crack the whip if anyone steps out of line.

Lula’s almost certain imprisonment marks a new political moment in Latin America: the beginning of similar processes against other leaders under judicial threat, such as former Ecuadorean President Rafael Correa and fomer Argentine President Cristina Fernandez de Kirchner. Their contexts are different, but the intention is clear: to close down the institutional paths towards any kind of electoral alternative by means of an accumulation of options which close down their room for maneuver.

In that sense, Lula’s example shows that it’s not enough to be Brazil’s most valued politician without the support of a system of power capable of defending itself against the arbitrary actions of the community of ruling interests. The reality is undeniable that the power of the military, the judges, the news media and private capital prevails against the will of most Brazilians.

The outcome is self-evident: the above-mentioned ruling coalition does not even respect the rules they themselves invented to govern Brazil, because those rules are no longer useful. That makes it of the utmost urgency for progressive forces to realize they are fighting on a battleground without rules or laws, one completely flexible where the mechanisms of pressure to achieve power need to be more than either votes or protests, the two main ways adopted to confront the continuing coup in Brazil.

Once again, progressive forces have to redesign both their means of struggle and their ideas for confronting the current regional political moment. For example, how to articulate a coalition for taking power, in every territory, so as to displace the ruling classes using different mechanisms of pressure and strength. In this context, important issues for debate are what power is for and what the conditions are for achieving it. Only by answering such questions can a viable proposal be put forward to remake everything the new pro-U.S. elites have wrecked along the way. It is an overwhelming need in this new stage for Latin America.