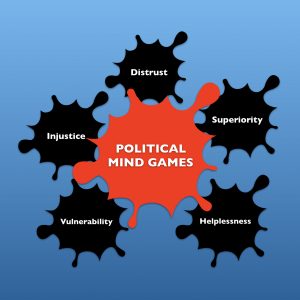 “It was miraculous. It was almost no trick at all, he saw, to turn vice into virtue and slander into truth, impotence into abstinence, arrogance into humility, plunder into philanthropy, thievery into honor, blasphemy into wisdom, brutality into patriotism, and sadism into justice. Anybody could do it; it required no brains at all. It merely required no character.”
— Joseph Heller, Catch-22

18 Apr 2018 – While millions of Americans grasp for lifelines amid the unforgiving currents of extreme inequality, multi-millionaires and billionaires comfortably ride the waves and add to their enormous wealth and power. The contrast is jarring to be sure, but it persists nonetheless because self-interested representatives of the 1% have become masters at using manipulative psychological appeals — I call them “mind games” — to defuse and misdirect our outrage. And when they succeed, we regrettably lose our bearings about what’s happening, what’s right, what’s possible, and what we must do.

Exploring this phenomenon as a psychologist, my research has led me to a focus on five concerns that are particularly influential in our daily lives: namely, issues of vulnerability, injustice, distrust, superiority and helplessness. Each is associated with a basic question we routinely ask ourselves: Are we safe? Are we treated fairly? Who should we trust? Are we good enough? Can we control what happens to us?

For multiple reasons, these concerns are especially important in this context. First, singly and in combination, they’re essential lenses through which we personally interpret events, evaluate our circumstances, and decide what actions, if any, to take. Second, these five concerns extend from individuals to groups; as a result, they’re relevant in a very wide range of settings: our interpersonal relationships, family relationships, work relationships, community relationships, and political relationships in local, national, and international spheres. Third, these same concerns have the potential to undermine our capacity for careful and critical thinking because they’re frequently linked to hard-to-control emotions, including fear, anger, suspicion, contempt, and despair.

Given their power and pervasiveness, then, it’s really not surprising that our concerns about vulnerability, injustice, distrust, superiority and helplessness are prized targets for manipulation. That’s why they figure so prominently in the propaganda campaigns of one-percenters who aim to discourage resistance to their narrow, self-aggrandizing agenda. Consider several examples. The 1% feed our vulnerability fears by pushing alarmist accounts of perils in our midst (the “It’s a Dangerous World” mind game). They twist our sense of injustice by insisting that they’re the ones who are actually being mistreated (“We’re the Victims”). They promote distrust and disorganization within the ranks of their opponents by pitting potential allies against each other (“They’re Different from Us”). They exploit notions of superiority by portraying the United States as a land of limitless opportunity where the cream always rises to the top (“They’re Losers”). And they encourage feelings of helplessness by arguing that today’s stark inequalities are the result of powerful forces beyond anyone’s control (“Change Is Impossible”).

The rich and powerful sometimes use these and related mind games to perpetuate an illegitimate status quo — for example, opposing universal healthcare (“Change Is Dangerous”), denying climate change (“It’s a False Alarm”), blocking sensible gun reform (“We’ll All Be Helpless”), and cracking down on dissent (“They’re Un-American”). At other times, they use similar appeals to expand their empire — for instance, by privatizing public education (“We’re Fighting Injustice”), by weakening labor unions (“They’re Devious and Dishonest”), by slashing corporate taxes (“We’ve Earned It”), and by pursuing deadly wars of aggression (“Pursuing a Higher Purpose”). Either way, when the 1% succeed in these efforts, few among us are spared the adverse consequences — especially those Americans already struggling to make ends meet or have their voices heard.

The Psychology of Persuasion

To better understand why the 1%’s mind games work so often, it helps to consider the science of persuasion. Whenever we try to influence someone’s attitudes, beliefs, or behaviors, we’re engaging in persuasion. A parent may cajole a young child into eating vegetables. A teacher may exhort a student to buckle down. A friend may push for seeing one movie over another. A co-worker may encourage a colleague to try a different approach to complete a difficult assignment. Years of research — by psychologists such as Elliot Aronson, Robert Cialdini, and Anthony Pratkanis, among others — have gone a long way toward illuminating key elements of effective persuasion.

Of particular note, persuasion typically follows either of two different paths. One route engages us in a careful, rational evaluation of the arguments presented. As listeners or readers, we review the evidence, assess which claims seem to make sense and which do not, and then draw our conclusions accordingly. With this route, we try to distinguish between strong arguments and weak arguments. It’s an approach that has a lot to offer in getting it right. But it requires time, effort, and discernment — three elements that can be in short supply, especially when we’re in a hurry, or we’re not very interested in the topic, or we lack important background knowledge and skills.

That’s where the second persuasion route comes into play. With this path, our judgments are instead based on considerations quite different from the merits of the arguments themselves. The critical factor here becomes the extent to which the message we hear or read elicits strong emotions, perhaps making us fearful, or angry, or optimistic. This emotional arousal can lead us to ignore the actual quality of the evidence that’s being presented to us. For instance, if we’re scared enough we may lose the capacity to think and see clearly — which is just what those offering weak arguments are hoping for.

In much the same way, certain characteristics of a speaker or writer can heighten their credibility regardless of the claims being made. For example, we’re more likely to believe someone who’s presented as an expert — even if, unknown to us, this person has been paid to espouse a particular point of view. We’re also more readily persuaded by an authority figure — a parent, teacher, boss, or leader of some sort — even if they have no expertise about the issue at hand. And we’re inclined to accept the arguments offered by those we deem trustworthy and likeable because we tend to see such people as offering honest, objective appraisals unbiased by hidden motives — even when they’re not.

In sum, there are a variety of reasons — both good and bad, both conscious and unconscious — why we might be persuaded by an appeal. In some situations, we’re given the opportunity to consider carefully formulated arguments that are logical and based on solid evidence. At least as often, however, we find ourselves presented with arguments that have little to do with establishing the truth, despite any appearance to the contrary. The latter is the predatory realm of the 1%’s mind games: they’re designed to take full advantage of our fallibility when it comes to figuring out who and what to believe.

How can we thwart the 1%’s agenda? It begins by personally resisting the sway of their mind games. As Noam Chomsky wrote almost four decades ago, “Citizens of the democratic societies should undertake a course of intellectual self-defense to protect themselves from manipulation and control, and to lay the basis for more meaningful democracy.” Such preventative strategies have never been more crucial than they are today. Of course, implementing them isn’t easy because tapping into our core concerns can give the 1%’s appeals the solid ring of truth — even though they’re as flimsy as a con artist’s promises.

The good news is that research on the psychology of persuasion shows how we can hold firm against the propaganda of the self-interested rich and powerful. Of particular relevance is what’s called “attitude inoculation.” The basic idea comes from the familiar public health approach used to prevent contracting and spreading a dangerous virus. Consider the flu vaccine. When you get a flu shot, you’re receiving a modest dose of the actual influenza virus. Your body responds by building up antibodies, which will prove essential in fighting off the full-blown virus if it later attacks as you go about your daily life. A flu shot doesn’t always work, but it improves your odds. That’s why we’re encouraged to get one each year before the flu season begins.

The 1%’s mind games are like a virus that can “infect” us with false and destructive beliefs. Here too, it turns out that inoculation is the best defense. Having been warned that this “virus” is prevalent and heading our way, in the form of deceptive appeals targeting our core concerns, we can become more vigilant and prepare in advance for the onslaught. The recommended preparation involves learning to recognize the mind games and practicing the counterarguments — the “antibodies” — that we’ll need when we’re later faced with an all-out assault. As psychologists Anthony Pratkanis and Elliot Aronson have explained, “We cannot resist propaganda by burying our heads in the sand. The person who is easiest to persuade is the person whose beliefs are based on slogans that have never been seriously challenged and examined.”

There’s nothing intrinsically wrong with appeals that focus on issues of vulnerability, injustice, distrust, superiority, or helplessness. Indeed, since these are our core concerns, they should be front and center when it comes to matters of public policy and the general welfare. But if we adopt a progressive perspective, political persuasion efforts that engage these issues should, with integrity, counter extreme inequality rather than preserve or extend it. These appeals should spur us to improve people’s lives, not turn our backs on those who are struggling. And they should help us understand how, together, we can make things better — for everyone.

The mind games of the 1% do exactly the opposite. They exploit our concerns for the specific purpose of advancing narrow interests while bringing harm to the vast majority of Americans. Rather than using their enormous resources to help create a more equal and decent society, the 1% instead devote themselves to protecting and expanding their wealth and power. Moreover, when arguing their case, they conceal their true intentions with carefully crafted appeals that manipulate our perceptions, promote falsehoods and distortions, and prey upon our emotions and prejudices.

That’s why meaningful progress depends upon debunking the seductive propaganda of today’s millionaire and billionaire snake-oil vendors. It’s a tall order. The 1% have created a daunting environment for collective action by those who oppose their aims. But we have key resources of our own, including a compelling vision for the country — one in which danger, mistreatment, and crushed aspirations will no longer be a routine part of so many lives.

Roy Eidelson is a member of the TRANSCEND Network and was a member of the American Psychological Association for over 25 years, prior to his resignation. He is a clinical psychologist and the president of Eidelson Consulting, where he studies, writes about, and consults on the role of psychological issues in political, organizational, and group conflict settings. He is a past president of Psychologists for Social Responsibility, associate director of the Solomon Asch Center for Study of Ethnopolitical Conflict at Bryn Mawr College, and a member of the Coalition for an Ethical Psychology. Roy can be reached at reidelson@eidelsonconsulting.com.