As Gaza Sinks into Desperation, a New Book Makes the Case against Israeli Brutality 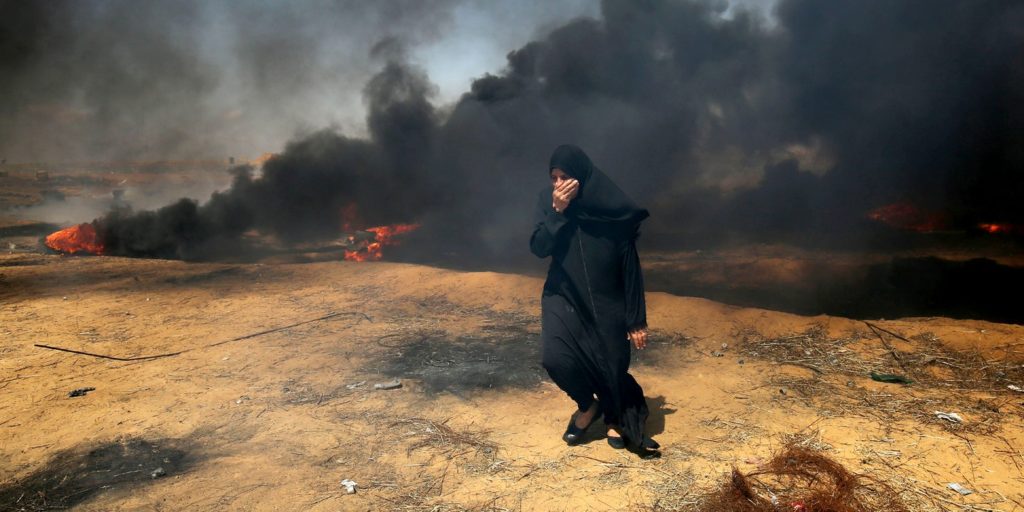 A Palestinian woman covers her face as smoke billows around her during clashes with Israeli forces along the border with the Gaza strip on May 11, 2018, as Palestinians demonstrate for the right to return to their historic homelands in what is now Israel. Photo: Said Khatib/AFP/Getty Images

13 May 2018 – Israel celebrates a double anniversary on May 15 this year, the founding of the state and the formal establishment of the Israeli Defense Forces, the name the state gave to its combined army, navy, and air force. Armed statehood fulfilled the political Zionists’ dream of gathering Jews from the ancient Diaspora under their own government in what they declared to be their “promised land.” During the battle over the land between 1947 and 1949, the IDF expelled three-quarters of the indigenous population. Of the 750,000 Palestinian Arabs who fled, 250,000 took shelter in Gaza, a tiny pocket of southwest Palestine then occupied by the Egyptian army. The destitute and traumatized refugees were three times more numerous than the 80,000 Gazans who took them in.

The United Nations passed but did not enforce annual resolutions calling for the refugees’ return. Israel invaded the territory in 1956, withdrew under American pressure in 1957, and invaded again in 1967. As its population grew to nearly 2 million souls packed into a pocket five miles wide and 40 miles long, Gaza has become a byword for misery. Former British Prime Minister David Cameron, no advocate of the Palestinian cause, called it “an open-air prison.”

In his new book, “Gaza: An Inquest Into Its Martyrdom,” Norman Finkelstein presents Gaza’s case like a veteran prosecutor at a homicide trial. “This book is not about Gaza,” he writes. “It is about what has been done to Gaza.” He asks the reader to decide “whether this writer is partisan to Gaza or whether the facts are partisan to it.” He dissects three major Israeli military actions against Gaza – Operation Cast Lead in December 2008, Operation Pillar of Defense in November 2012, and Operation Protective Edge in July 2014 – as well as the Israeli commando raid on a Turkish aid flotilla in May 2010. His blistering critique encompasses the international response to those events and the prolonged siege of Gaza by Israel and Egypt. The book makes for harrowing reading, replete with exhaustive research and detailed analysis to explain Israeli objectives in Gaza. Summarizing the IDF’s use of Gaza, Israeli journalist Gideon Levy in the New York Times last April called it Israel’s “training field, a giant lab — for gauging the reactions of the nearly two million people it keeps under siege there, and for testing its innovating weapons, as well as the limits of what the world will let it get away with.”

Recent history indicates that Israel can “get away with” a great deal. It long ago closed Gaza’s port, airport and land border. The Palestinians’ traditional supporters in the Arab world, especially Saudi Arabia and Egypt, ignore them. Russia and China express sympathy while doing nothing. Nominal aid comes from Iran in the form of mostly ineffectual weapons for Hamas, a rare instance of the Shiite theocrats arming Sunni fundamentalists. Former Israeli Prime Minister Yitzhak Rabin spoke for most of his countrymen when he said of Gaza, “If only it would just sink into the sea.”

Gaza is sinking, if not into the sea, into desperation. The Israeli embargo has rendered 65 percent of Gazans under the age of 30 unemployed. Health care suffers from lack of equipment and medicine. People cannot leave to find work outside, and children live with the trauma of never knowing when their homes will be bombed. When I was there in 2002, Dr. Eyad Sarraj of the Gaza Community Mental Health Program told me that almost half the children under 16 suffered bed-wetting due to constant fear. That was before the military invasions of the last 10 years. 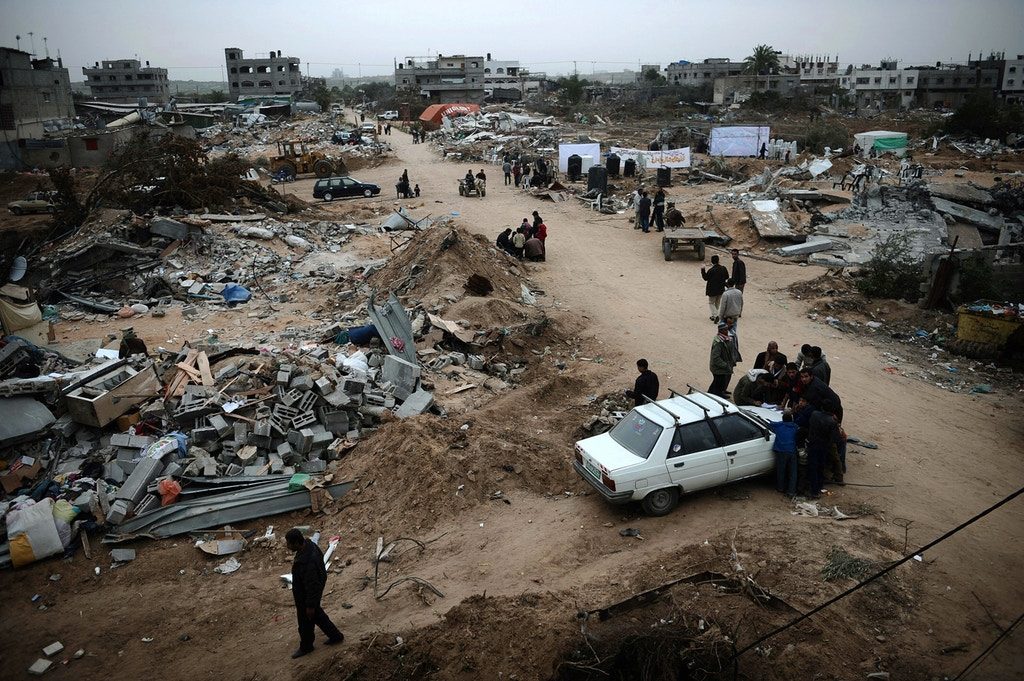 Finkelstein lists Cast Lead’s toll of sites destroyed or badly damaged: 58,000 homes; 28 schools and kindergartens; 1,500 factories and workshops; 190 greenhouses; 30 mosques; media centers (killing six journalists); and 80 percent of the agricultural crop. The ratio of Palestinian to Israeli civilians killed was 400 to 1. More than 300 of the 1,400 Palestinian dead were children. The onslaught included the deployment of white phosphorus, an illegal chemical agent that burns skin at temperatures up to 1,500 degrees Fahrenheit (816 degrees Celsius).

“What was Israel trying to accomplish?” Finkelstein asks. For the answer, he turned to the usually conscientious American scholar Anthony Cordesman. Cordesman’s report, based entirely on IDF accounts, wrote that Cast Lead’s goal was to “restore Israel’s deterrence and show Hezbollah, Iran, and Syria that it was too dangerous to challenge Israel.” That is not the same as self-defense, the usual legal justification for war.

The enormity of Cast Lead emerged in the meticulous report commissioned by the U.N. Human Rights Council in April 2009 under the eminent and pro-Zionist South African jurist Richard Goldstone. Goldstone agreed to chair a commission of inquiry on the condition that it examined crimes by all sides, including Hamas. His report, writes Finkelstein, turned out to be “a comprehensive, full-blown indictment of Israel’s treatment of Palestinians during the occupation.” Goldstone’s forensic and eyewitness evidence, much of it from Israeli combatants, was beyond reproach; but his conclusions — that Israeli forces had violated international law and were liable to prosecution — drew immediate fire from Israelis who had expected a whitewash. Former President Shimon Peres called Goldstone “a technocrat with no real understanding of jurisprudence.” “Professor Gerald Steinberg of Bar Ilan University declared that ‘Israel had the moral right to flatten all of Gaza,’” writes Finkelstein. In a wry aside, one of many in the book, he notes, “Steinberg founded the university’s program on conflict resolution and management.”

Israel’s hasbara, or propaganda, assault was so fierce that Goldstone recanted in the Washington Post on April Fools’ Day in 2011. He had not consulted his co-commissioners, who continued to defend the integrity of their report. The eventual effect of the campaign against Goldstone, Human Rights Watch, Amnesty International, and some of Israel’s own human rights societies was to frighten critics of Israel’s Gaza policies into virtual silence. Operations Pillar of Defense and Protective Edge followed. They are unlikely to be the last as long as Gazans demand an end to the siege that cripples their lives, and Hamas refuses to disarm while insisting on its right under international law to resist military occupation.

No one who ventures an opinion on Gaza — which the U.N. predicts will be “unlivable” by 2020 — is entitled to do so without taking into account the evidence in this book. For that, at least, the people of Gaza owe a debt to Norman Finkelstein.