“Those responsible for violations must in the end be held accountable.” 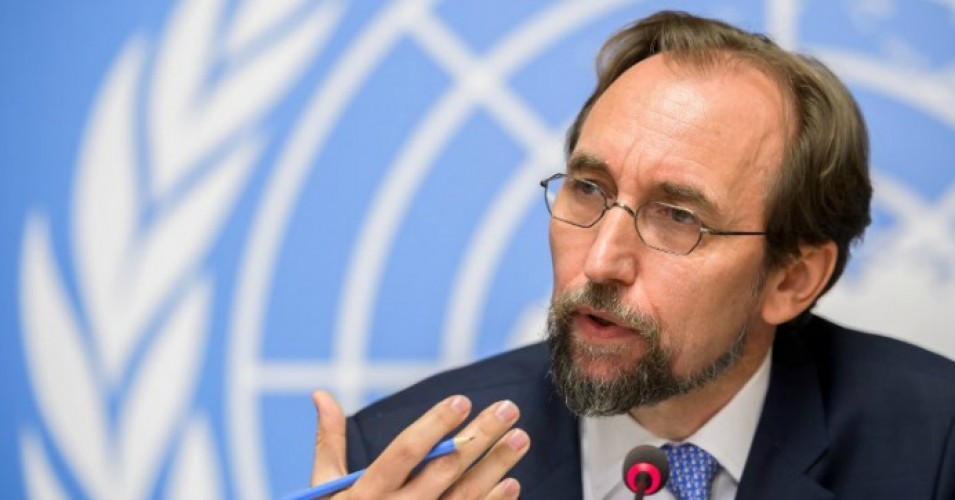 United Nations High Commissioner for Human Rights Zeid Ra’ad Al Hussein gestures as he delivers a press conference on a report on Venezuela at the UN Offices in Geneva on August 30, 2017. (Photo: Fabrice Coffrini/AFP)

“What do you become when you shoot to kill someone who is unarmed, and not an immediate threat to you? You are neither brave, nor a hero.”
—Zeid Ra’ad Al Hussein, U.N. human rights chief

Palestinians “are, in essence, caged in a toxic slum from birth to death; deprived of dignity; dehumanized by the Israeli authorities to such a point it appears officials do not even consider that these men and women have a right, as well as every reason, to protest,” Zeid said. “I therefore endorse calls made by many states and observers for an investigation that is international, independent, and impartial—in the hope the truth regarding these matters will lead to justice.”

Taking aim at the rhetoric of Israeli officials in the aftermath of the massacre, Zeid went on to say, “This was not ‘a PR victory for Hamas,’ in the reported words of a senior Israeli military spokesman; it was a tragedy for thousands of families.”

Palestinians have exactly the same human rights as Israelis do. They have the same rights to live safely in their homes, in freedom, with adequate and essential services and opportunities. And of this essential core of entitlements due to every human being, they are systematically deprived.

All of the 1.9 million people who live in Gaza have been penned in behind fences and have suffered progressively more restrictions and greater poverty. After 11 years of blockade by Israel they have little hope of employment, and their infrastructure is crumbling, with an electricity crisis, inadequate health services and a decaying sewage system that constitutes a threat to health.

Zeid’s remarks came during a special session of the Human Rights Council that was called after Israeli forces killed more than 60 Palestinians and wounded over two thousand more on Monday.

On the heels of Zeid’s speech, the council voted to launch an independent investigation of the massacre. Only the U.S. and Australia voted against the probe, and 14 nations—including Germany, the United Kingdom, and Switzerland—abstained.

“Those responsible for violations must in the end be held accountable. In this context, as in all conflicts where impunity is widespread, unless ended by a peace settlement, excessive violence—both horrifying and criminal—flows easily from the barrel of a gun; becomes normal, destroying the occupied perhaps, but something crucial too in the occupier,” Zeid concluded. “What do you become when you shoot to kill someone who is unarmed, and not an immediate threat to you? You are neither brave, nor a hero. You have become someone very different to that.”