Jewish Past vs Jewish State 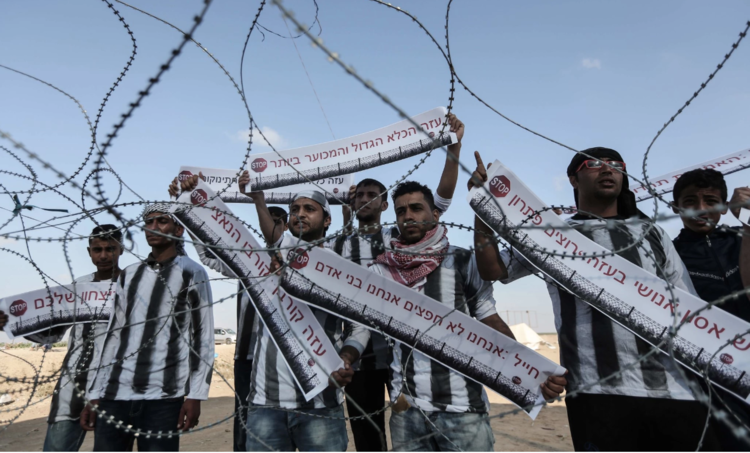 Young Palestinians protestors at the Gaza border carry signs in Hebrew: “Soldier, we are not objects, we are human beings.’

14 May 2018 – Zionism promised to solve the Jewish problem. It vowed to fix Diaspora Jews by means of a ‘homecoming,’ to make the Jews loved, empathic, bond them to the soil; in essence, to make them ‘people like all other people.’

The horrific scenes flooding in from Gaza today demonstrate that Zionism failed miserably. The Jewish State is an embarrassment to its original humanist endeavour and to humanity in general.

Just today, at least 43 Palestinian protestors have been killed and 2,200 wounded by Israeli troops at the Gaza border. Some reports suggest that half of the injuries were caused by live ammunition. This is  devastating news. The criminality of Israel is institutional. This is not about one odd sniper who laughs as he shoots a young Palestinian in the knee, crippling him for life. Israel is displaying a systematic hierarchic murderous apparatus designed to sustain the oppression of the indigenous people of the land for an unlimited period.

Despite the Zionist dream, the Jewish state isn’t loved by its neighbours. It isn’t loved by the rest of the world either. In fact Israel’s actions evoke global repulsion. Instead of solving the Jewish problem, Zionism has only relocated the problem and amplified the symptoms it vowed to eliminate.

Truth can be a disturbing notion; no matter how much you try to suppress it, truth manages to come out. Accordingly, it is impossible to grasp the history of Jewish suffering without taking into consideration the atrocious actions of the Jewish state.  As it happens, Israeli politics is driven by a complete dismissal of the other. The Israeli military operation in Gaza is simply a license to murder. One would hope that a state that names itself the Jewish State would be slightly more vigilant with its excessive  use of power.

By now I believe that Israel is going to be remembered as the darkest chapter in Jewish history and beyond.