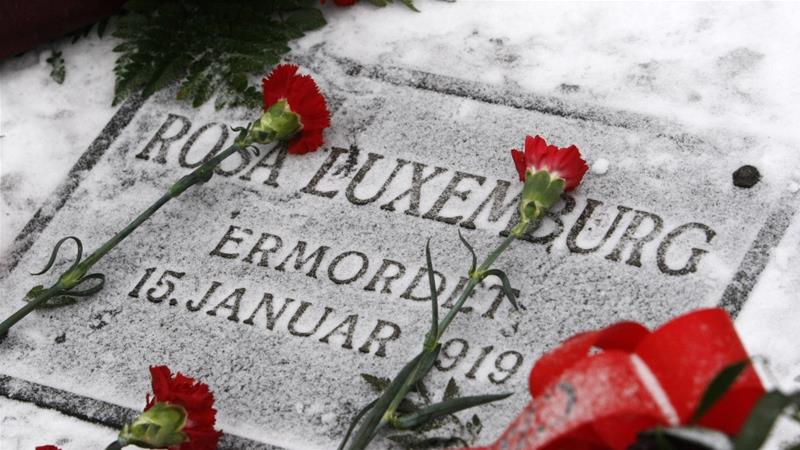 Carnations are laid on the tomb of German communist leader Rosa Luxemburg during a ceremony to commemorate her death, at the Monument for the Socialists in Berlin, Germany. [Fabrizio Bensch/Reuters]

12 May 2018 – The world at large is these days celebrating the 200th anniversary of the birth of Karl Marx (May 5, 1818 – March 14, 1883) the revolutionary political economist who, with a single act of theoretical genius, redefined our enduring understanding of the material foundations of our economic class, social life, political positions, and ideological proclivities in his three-volume magnum opus, Das Kapital (1867–1883) . His very vocabulary of theorising the economic foregrounding of social and political (and even religious) forces have now become integral to the social sciences and the humanities – used and abused by friends and foes alike.

In a world ravaged by the wanton cruelty of predatory capitalism – now most notoriously led by the imperial presidency of Donald Trump and his billionaires’ cabinet, aided and abetted by their European and regional allies – the enduring wisdom of Marx’s theory of capital and its political consequences continue to guide the course of our struggles for global justice.

Marx, however, was incurably Eurocentric in the very cast of his critical thinking. Although he was aware of the expansionist proclivities of a capitalist economy, Marx never fully developed a theory of how colonialism was the modus operandi of this capitalist tendency. Although in the 1850s, Marx wrote brilliantly in his essays for New York Daily Tribune on various aspects of European colonialism, his Eurocentric blind spot led him to his notorious notion of “Oriental Despotism” and the scandalous argument that colonialism was actually good for India because it “modernised” the subcontinent.

Such theoretical blinders and political blunders barred the extension of his own insights into a more global theory of capital and its political consequences. When it came to his perception of the non-European world, Marx was as much an Orientalist as the rest of his European contemporaries – though he, of course, wished to see the world liberated globally from the terrors of an abusive capitalist system. But when he said, “Workers of the World Unite,” he basically had European workers in mind. The rest of the world had to be liberated from their feudal ways and “modernised” before reaching the revolutionary consciousness of his European audience.

The necessary and crucial task of extending Marx’s groundbreaking ideas to the world at large remained for the next generation of Marxist critical thinkers, the Polish-born German Jewish revolutionary thinker and activist Rosa Luxemburg (1871-1919) in particular. 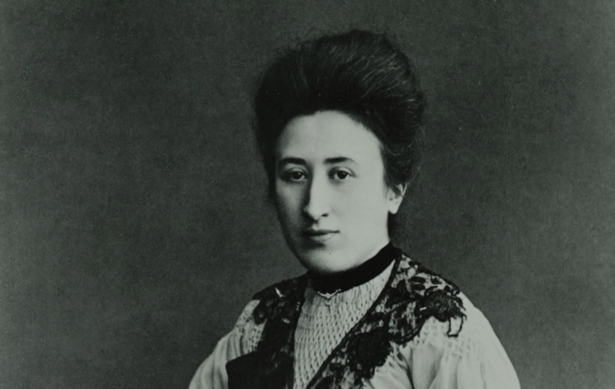 Bourgeois nationalism on the postcolonial sites

There is a legitimate Marxist critique of aspects of postcolonial theory as it is received and perceived on North American university campuses and made palatable to soft-spoken liberalism, where the bitter roots of this critical movement in colonial experiences are sweetened for bourgeois palatability. In this version, Cesaire, Fanon, Malcolm X, and even Edward Said are robbed of their experience as African, Caribbean, African American, or Palestinian and given a gentle and sociable aura not to frighten white people.

But there is another version of postcolonial theory that in fact begins long before Cesaire, Fanon, Malcolm X, or Said and is rooted in such radical Marxist thinkers as Rosa Luxemburg who, early in the 20th century, were busy thinking far more globally about the significance of Marx’s thought – even more poignantly than did Marx himself.

As a Jew, a woman, and a socialist revolutionary, Rosa Luxemburg was in a unique position to think about the meaning of Marx’s ideas from the vantage point of disenfranchised segments of the world in or out of Europe. As a Jew, she was the internal other of Europe; as a woman, its gendered alterity; and as a socialist revolutionary, its nightmare.

In her groundbreaking book, the Accumulation of Capital (1913), Rosa Luxemburg demonstrated how capitalism expands the domain of its predatory operation globally to exploit resources, abuse cheap labour, expand its insatiable need for new markets, and accumulate ever-increasing surplus value. European imperialism, she suggested, was the military machinery to enable and facilitate this globalization of capital.

Without Rosa Luxemburg correction of Marx’s theory of capital, his blindfolded Eurocentrism would have had two fatal deficiencies. He could not account for the European longevity of the capitalist system and he would have been irrelevant to the colonial extension of capitalism. Luxemburg’s argument that the endemic crisis of the capitalist system propels it to imperialism and colonialism effectively brought the realm of the colonial into the critical apparatus of Marxist thinking.

Rethinking Marx “on the margin?”

To be sure, in his Imperialism: The Highest Stage of Capitalism (1917), published about half a decade later, Vladimir Lenin, too, connected the economic vicissitude of capitalism and the military logic of imperialism together, arguing military expansionism was the mechanism through which European countries delayed the endemic economic crisis in their own countries.

Other major Marxist theorists, such as Karl Kautsky and Nikolai Bukharin, had also paid close attention to the link between capitalism and imperialism. These figures were pioneering theorists dismantling the racist colonialist assumption that colonialism was instrumental in the process of so-called “modernisation”. It was because of them that “modernisation” was exposed for what it has been: a euphemism for colonisation.

In an excellent recent book, Marx at the Margins (2010), Kevin Anderson has sought to rescue Marx from his European provincialism and offer us, with some degree of success, a different version of Marx. The only problem with such revisionist accounts and other Marxist theorists seeking to expand Marx’s insights is that even in their closer attention to global consequences of capitalism, they remained Eurocentric in the sense that, even in their “world-system” theories – a la Immanuel Wallerstein – they still believe in a “core-periphery” dichotomy between capital and its colonial consequences.

There is no “core” or “periphery” to the global operation of capital and the military forces that sustain it. The ruling elites in the US, the EU, Asia, Africa, and Latin America are as much the beneficiary of the system they violently uphold as those who are disenfranchised by it are dispersed in these very places.

Racism is a mere ideological veneer to the hardcore economic logic of colonialism and imperialism. Predatory capital is colour-blind and gender-neutral. It abuses white and coloured labour identically and it makes no difference to its maddening logic if you are a Donald Trump or a Saudi prince, an Egyptian general, an Indian entrepreneur, a Russian oligarch, or a Chinese businessman. Those who are abused and maligned by the selfsame system are as much among the poor of the US and Europe as they are in Asia, Africa, and Latin America. Colour and gender codification of power is a mere false consciousness to the economic logic of power and domination.

The migrant labourers, more than 300 millions of them, roaming around the globe in search of a half decent wage, are neither in the centre nor in the periphery of any system. They are the most obvious victims of the predatory capitalism made invisible by a false geography of “centre and margin”, or “core and periphery”.

By giving detailed accounts of the British economic atrocities in India, and French colonialism in Algeria, Rosa Luxemburg anticipated the more detailed accounts of postcolonial theories by decades. By bringing the presumed margins of self-centring Europe to global consciousness, she enabled the postcolonial theorist a veritable voice at the worldwide gathering of critical Marxist thinking.