Unearthing Truths: Israel, the Nakba, and the Jewish National Fund

The Forward courageously reminds American Jews of the reality of the Nakba, the slogans and symbols of the Jewish project that enabled mass expulsion and ethnic cleansing of the Palestinian people – and the policies that enable it to continue today. Our hope is that pro-Israel communities will honestly confront the history and the present situation in the land, and move toward justice. 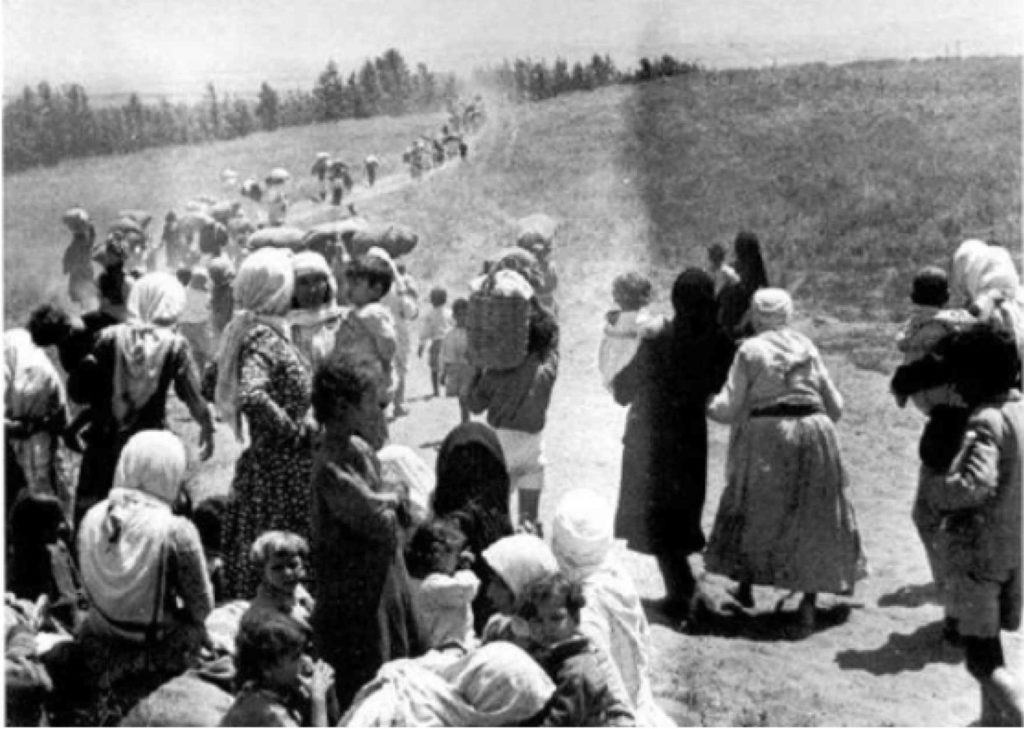 One of countless photos of Palestinians fleeing their homes during the Nakba – the Catastrophe – of 1948 when they were forced from their land by the new state of Israel.

1 May 2018 – We present this special issue of Moving Forward to commemorate the 70th anniversary of the Nakba, the Arabic word for ‘catastrophe.’ The Nakba refers to the expulsion and dispossession of 750,000 Palestinians from their homeland during Israel’s creation (1947-1949).

In this issue, we lay out the historical record of those years to show that the Nakba was the result of a deliberate policy of mass expulsion, dispossession, and ethnic cleansing—a strategy designed to ensure that the Palestinians who had lived on the land for generations would be barred from ever returning. We also zero in on the fundamental role played by the 117-year-old international organization, the Jewish National Fund (JNF), in facilitating that dispossession. 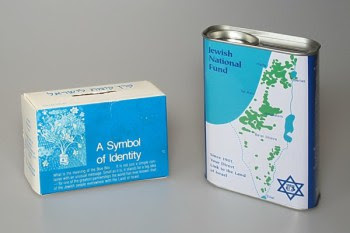 American Jews used to drop coins into the Jewish National Fund’s blue charity boxes to help Zionists build the Jewish state. More than a century later, the JNF, known in Hebrew and functioning in Israel as Keren Kayemeth LeIsrael (KKL), owns 13% of all the land in the country and brings in some $b 3 billion a year, most of it from land sales.

Our goal is that there be a serious moral reckoning with this history, and it begins with that icon of innocence, the JNF’s small blue metal box that many of our readers will remember from their childhood, boxes that beckoned us to drop in coins that would help “make the desert bloom” and build the land of Israel. It was a mission that was legitimized by the governing principle of the Zionist cause: “A land without a people for a people without a land.” As seductive as that slogan was, it was willfully false, as amply documented in personal testimonies of Palestinians and Israelis, historical records, and scholarly research. How, after all, could 750,000 Palestinians flee “a land without a people”?

From its founding, the JNF was encouraged by the Zionist movement to acquire land in Palestine for the purpose of settling Jews on that land. After 1948, aided and abetted by Israeli land law, the JNF continued to acquire land and also contributed to Israel’s dispossession of Palestinians from their land. This was accomplished by buying swathes of land from absentee landlords and then leasing it exclusively to Jews, by confiscating refugees’ land, and by forcibly—often violently—removing Palestinians from their land, a practice which persists today. By continuing to plant forests that conceal the ruins of Palestinian villages, the JNF seeks to erase history and memory, while hoping to whitewash its political motives and enhance its recent branding as an environmental organization. Ironically, however, it has earned widespread international condemnation for the degradation it has inflicted on the natural ecosystem.

While this year marks the 70th anniversary of the catastrophic events of 1948, we also know that the policies that informed Israel’s and the JNF’s actions back then continue to the present. With this issue we hope to expose the relationship between the Nakba and the Jewish National Fund; to encourage deeper conversation about the experiences and realities of Palestinians before, during and since Israel’s creation; and to facilitate among US Jewish communities—and more broadly—honest reflection, analysis, and action toward truth-telling and justice.

To our readers:  Please note that the articles in this special issue of Moving Forward were originally published between 2005 and 2018 and that text written in the present tense refers to events that occurred at the time of publication.