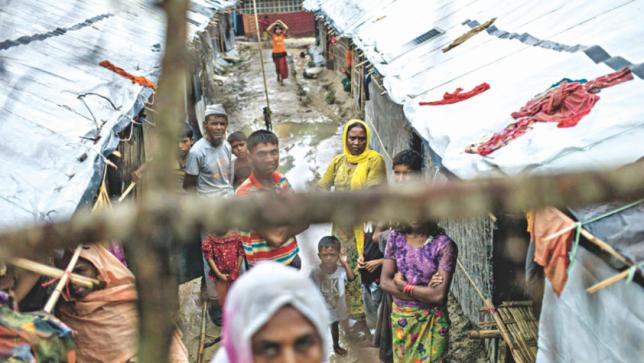 Rohingya refugees stand in an alley of Kutupalong refugee camp in Ukhia on September 28, 2017. Photo: AFP

7 Jun 2018 – Since August last year, the world has witnessed how hundreds of thousands of desperate Rohingyas have fled across the border into Bangladesh, bringing with them tales of unimaginable horror. Many of these refugees are my friends and relatives. For the first time, the world has woken up to what we Rohingya have lived with for decades—Myanmar’s systematic and genocidal attempts to wipe us out as a people. Now we need the help of the world, and Bangladesh, to obtain justice.

Last week, Myanmar announced it was establishing an “independent commission of inquiry” to “investigate the violation of human rights and related issues following the terrorist attacks” in Rakhine State in 2017. The fact that Myanmar did not even mention its own military’s abuses speaks volumes of how credible this investigation will be. Over the past years, I have seen Myanmar establish a multitude of similar commissions, always at politically opportune times. In the end, they accomplish very little—they buy Myanmar a modicum of time and international goodwill, but they lead to no genuine accountability or to improvements for the lives of Rohingya people.

It is abundantly clear that Myanmar is both unwilling and incapable of investigating itself. Senior leaders have taken turns to deny the well-documented atrocities carried out by security forces against the Rohingya people. The military has little incentive to punish itself for its own crimes. State Counsellor Aung San Suu Kyi, the de facto political leader, has dismissed reports of human rights violations and questioned why people have been fleeing in the first place.

There is no question that the international community must play a role in providing justice, and the International Criminal Court (ICC) is increasingly looking like the only real hope. Although Myanmar is not a signatory to the Rome Statute of the ICC, that does not mean that all avenues are closed—far from it.

In April this year, ICC prosecutor Fatou Bensouda asked the court to rule on whether the ICC “can exercise jurisdiction over the alleged deportation of the Rohingya people from Myanmar to Bangladesh,” which is under the jurisdiction of the Court. A ruling affirming such jurisdiction could pave the way for the ICC to investigate Myanmar for the crime against humanity of deportation. Bangladesh, which has already done so much in welcoming refugees, can play a crucial role in making this a reality.

On June 20, a panel of judges will hold a closed-door hearing on the question. The ICC has asked Bangladesh for its opinion on whether it can exercise jurisdiction over the deportation of Rohingyas from Myanmar to Bangladesh. So far, Dhaka has yet to respond, although the deadline of June 11 is fast approaching.

We are grateful for the generosity of Bangladesh since the crisis erupted. Dhaka has essentially kept its borders open and hosted hundreds of thousands of people in what has already become one of the world’s largest refugee camps. When I visited Cox’s Bazar, I was touched not only by the welcome from officials but also from ordinary people. At the height of the crisis, local Bangladeshis were lining up along the border to offer food to fleeing refugees and spent their own meagre resources on constructing shelters.

But an influx of people of this scale is a strain on any country’s resources. The situation is not sustainable, and the only solution to the root cause of the crisis lies on the other side of the Naf river in Myanmar.

It is important to remember that this crisis has not happened in a vacuum but is just the latest chapter in a long cycle of abuse. In the late 1970s and early 1990s, similar violent campaigns by Myanmar security forces pushed hundreds of thousands of Rohingya refugees to flee into Bangladesh. Each time, Bangladesh struck a deal with Myanmar for the return of refugees, only for renewed violence to force another exodus of people. Each time, it has been Bangladesh that has been forced to deal with a humanitarian crisis that is not of its own making.

My parents were forced to temporarily flee into Bangladesh after Myanmar’s first major anti-Rohingya operation (“Operation Nagamin” or “Operation Dragon King”) in 1978. I myself witnessed similar violence in 1991 shortly before I fled Rakhine State. How many more times will history have to repeat itself before something changes? Unless those responsible for atrocities—regardless of their rank or position—are held to account, Myanmar’s authorities will feel they can commit similar abuses in the future without consequence.

An ICC investigation into mass deportation would be limited and not cover other crimes against humanity, including murder, rape, torture, persecution or genocide. But in the shorter term, it would be an essential start. Most importantly, it would send a powerful message to Myanmar’s authorities that they are not above the law, and that the world is willing to back up condemnation with genuine action. Separately, we will continue lobbying members of the UN Security Council to refer the situation in Myanmar to the ICC, which would pave the way for a broader mandate.

The current lack of accountability is not just affecting the Rohingya, but also people in other ethnic areas where security forces and armed groups commit war crimes with impunity. In Kachin State, for example, violence has again flared between the military and insurgents, driving thousands from their homes.

By responding in the affirmative to the ICC, Bangladesh could play a major role in making such accountability a reality. I urge Dhaka to do what it can to support the ICC and the Rohingya people—not just for us, but for the fight for justice everywhere.

Tun Khin is president of the Burmese Rohingya Organisation UK and a member of the Free Rohingya Coalition.