World Citizen Norman Cousins was a pioneer of Track II diplomacy. Track I is official government to government diplomacy among instructed representative of the State.  Track II is a non-official effort, usually by a non-governmental organization (NGO) or an academic institution.  Track II talks are discussions held by non-officials of conflicting parties in an attempt to clarify outstanding disputes and to explore the options for resolving them in settings that are less public or less sensitive than those associated with official negotiations. 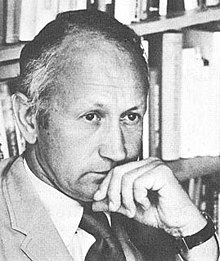 Track II talks can also be defined by what they are not: neither academic conferences nor secret diplomacy conducted by government representatives.  At a minimum, Track II talks  are aimed at an exchange of views, perceptions and information between the parties to improve each side’s understanding of the other’s positions and policies.

While Track II talks need not necessarily be linked to concurrent Track I negotiations, participants in Track II must have some relations with officials in their countries’ decision-making circles for such talks to be effective.

As Kenneth Boulding, a Quaker economist often a participation in Track II discussions wrote in a little poem:

“When Track One will not do,
We have to travel on Track II;
But for results to be abiding,
The Tracks must meet upon some siding.”

During the late 1940s and the whole of the 1950s the Soviet Union continued a form of Track II diplomacy which had been begun by the Comintern around 1935 when the aggressive policies of the Nazi government in Germany was recognized.  The Comintern was the pre-World War II coordinating body of Communist parties world wide but was basically an instrument of the Soviet Union’s foreign policy.  As of 1935, the Comintern effort was to create new non-governmental organizations which would link communists with non-communists in a “common front” or a “popular front” against Nazi and Fascist movements.  The non-communists in these fronts were often people who had been opposed by the communists a short time before.  The common front groups were theoretically not controlled by the communists but were often used by Soviet diplomats to gain information and to try to influence the politics of other countries.

The Commintern was officially dissolved during the Second World War as a gesture of good will toward the Western allies.  However, the Commintern agents did not forget their experiences.  Thus as the Second World War was coming to an end and the Cold War starting, there was organized a Soviet-influenced network of non-governmental movements: The World Federation of Democratic Youth, the International Union of Students, World Federation of Democratic Women, World Federation of Scientific Workers, and the World Peace Council which was “the flag ship”. The degree of Soviet control of these NGOs has not been seriously studied nor their archives opened.  However, this network was considered by others as Soviet controlled and their non-communist members as favorable to Soviet positions.

Thus, if there were to be real Track II discussions between Soviets and Americans, there had to be new avenues in which the Americans who participated were not thought to be “soft on Communism”.  The 1950s in the USA had been colored by the McCarthy period, named after Joseph McCarthy, the Senator from Wisconsin who saw communists pulling strings everywhere.  Thus, in 1960, the Dartmouth Conference, named after the US college where the first meeting was held, under the leadership of Norman Cousins, was born. (1)

Cousins was born and grew up around New York City and was graduated from New York’s Columbia University.  After graduation, he became a writer for the New York Post , then a liberal newspaper.  In 1940 he joined the journal The Saturday Review of Literature which had its offices in the same building as The Post.

Cousins wrote a much quoted article “Modern Man is Obsolete” on 6 August 1945 as the US military dropped the A.- Bomb on Hiroshima.  It was published the next day and became a key text for the “One World or None” ideology which stressed that Atomic bombs had created a new situation which had to be met by a new world framework of a stronger United Nations and the growth of world citizenship. Cousins wrote

“The new education must be less concerned with sophistication than with compassion.  It must recognize the hazards of tribalism. It must teach man the most difficult lesson of all – to look at someone anywhere in the world and be able to see the image of himself – an education for citizenship in the human community.”

In 1953 Cousins published Who Speaks for Man, the theme being that while a president speaks for the citizens of his country and a religious leader speaks for the members of his faith, there was no one who was recognized as speaking for humanity as a whole.  This task of “speaking for man” was the role which citizens of the world should carry out.

The early 1950s was a time when there was increasing public criticism of testing nuclear weapons in the atmosphere because of the radioactive fallout which could endanger health.  This was my first political effort, and I met Norman Cousins at the time.  We always stayed in touch, and I welcomed his advice. Although Cousins was a good deal older than I and much better known, he always treated everyone with respect and was a willing listener to what others had to say.  A New York intellectual of Jewish background, if not ceremonial practice, he has always represented for me the spirit of world citizenship: rooted and learned in a particular culture and open to the world, its difficulties and its hopes.

Anticopyright: Editorials and articles originated on TMS may be freely reprinted, disseminated, translated and used as background material, provided an acknowledgement and link to the source, TMS: Norman Cousins (24 Jun 1915 – 30 Nov 1990): A Pioneer of Track II Diplomacy, is included. Thank you.