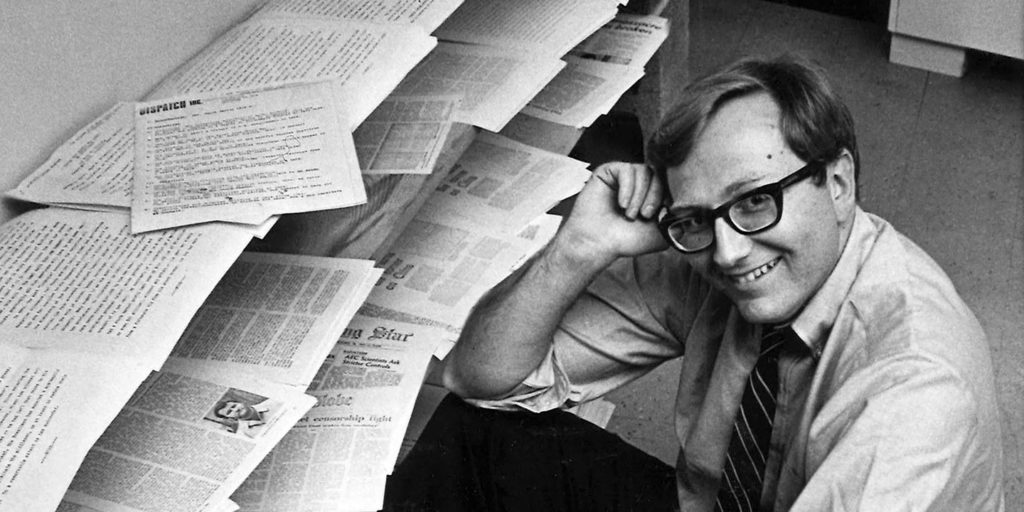 Seymour M. Hersh sits in the furniture-less office of Dispatch News Service in Washington, May 4, 1970, after being awarded the Pulitzer Prize for international reporting. Hersh disclosed the alleged massacre of Vietnamese civilians at My Lai.

2 Jun 2018 – At the beginning of Seymour Hersh’s new memoir, “Reporter,” he tells a story from his first job in journalism, at the City News Bureau of Chicago.

City News stationed a reporter at Chicago’s police headquarters 24 hours a day to cover whatever incidents were radioed in. Hersh, then in his early 20s, was responsible for the late shift. One night, he writes, this happened:

Two cops called in to report that a robbery suspect had been shot trying to avoid arrest. The cops who had done the shooting were driving in to make a report. … I raced down to the basement parking lot in the hope of getting some firsthand quotes before calling in the story. The driver – white, beefy, and very Irish, like far too many Chicago cops then – obviously did not see me as he parked the car. As he climbed out, a fellow cop, who clearly had heard the same radio report I had, shouted something like, “So the guy tried to run on you?” The driver said, “Naw, I told the nigger to beat it and then I plugged him.”

What happened then? Did Hersh, who would go on to uncover the My Lai massacre in Vietnam and become one of the greatest investigative journalists in U.S. history, sprint to his publication and demand that it run this explosive scoop?

No. Hersh spoke to his editor, who told him to do nothing, since it would be his word against the police. He didn’t try to interview the responsible cop or his partner, or dig much further. Instead, he gave up on it and soon headed off to do his required service in the Army, “full of despair at my weakness and the weakness of a profession that dealt so easily with compromise and self-censorship.”

If Hersh were a superhero, this would be his origin story. Two hundred and seventy-four pages after the Chicago anecdote, he describes his coverage of a massive slaughter of Iraqi troops and civilians by the U.S. in 1991 after a ceasefire had ended the Persian Gulf War. America’s indifference to this massacre was, Hersh writes, “a reminder of the Vietnam War’s MGR, for Mere Gook Rule: If it’s a murdered or raped gook, there is no crime.” It was also, he adds, a reminder of something else: “I had learned a domestic version of that rule decades earlier” in Chicago.

“Reporter” demonstrates that Hersh has derived three simple lessons from that rule: 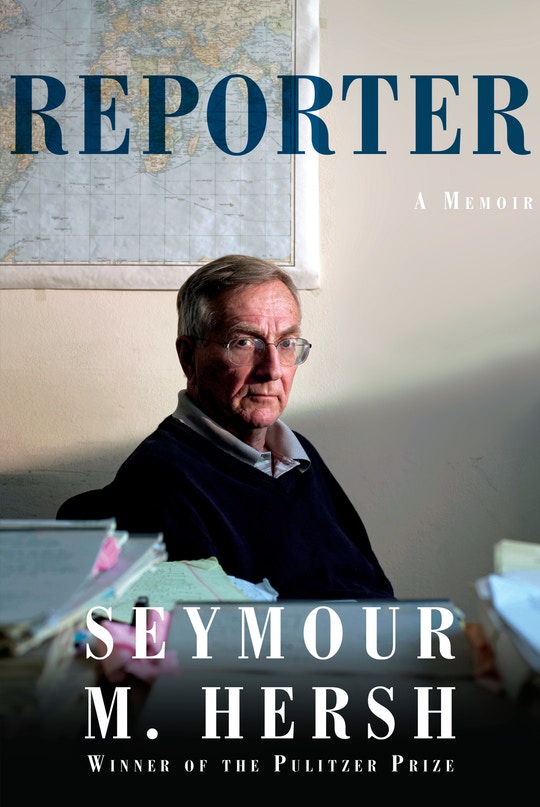 “Reporter” provides detailed explications of how Hersh has used these lessons, making it one of the most compelling and significant books ever written about American journalism. Almost every page will tell you something you’ve never heard before about life on earth. Sometimes it’s Hersh elaborating on what he’s already published; sometimes it’s new stories he felt he couldn’t write about when he first learned of them; and sometimes it’s the world’s most intriguing, peculiar gossip.

Below are some examples. If you think it’s unfair to Hersh to reveal all his secrets in a review, don’t worry — this is not even 1/100 of what his book contains.

In the first category — Hersh going into more detail about his previous stories — is his explanation of how he got the goods for his first book, about America’s secret offensive biological and chemical weapons programs. He started by carefully reading an article in Science magazine that listed the dozens of army bases doing relevant research. He then got copies of the newspapers from each base — because he knew from his time in the military that they would all have articles naming colonels and generals who were retiring — and methodically approached all the former top officers to see who would talk.

Hersh’s work publicized one particularly terrifying incident, when Dugway Proving Ground in Utah did an aerial test of VX nerve agent in 1968 that accidentally killed more than 6,000 sheep belonging to local ranchers. This, in turn, had helped generate pressure that led to President Richard Nixon ordering a unilateral halt of U.S. production of chemical weapons. (While Hersh doesn’t mention this, we also have him to thank for the Stephen King novel, “The Stand,” which begins with a superflu developed by the government escaping from a military lab. King has said his book was inspired by media coverage of the Dugway disaster.)

There’s also Hersh’s account about what happened in 1976 when he was investigating Sidney Korshak, a powerful Mafia lawyer, for the New York Times. One night Hersh got an alarming call at home from a California district attorney who told him that Korshak’s people had obtained all of Hersh’s travel and phone records, placing his sources in real peril. A quiet internal investigation by the Times later found that a clerk in the Times treasury office had a family connection to the Chicago mob.

In the category of stories Hersh did not report at the time is a disturbing account from a few weeks after Nixon resigned in 1974 and returned to California. Hersh writes that he had received a tip that Nixon had beaten his wife Pat so badly that she had to be treated at a local emergency room. Then John Ehrlichman, who’d been one of Nixon’s top aides, told Hersh that he knew of other incidents when Nixon had abused her. But Hersh did not report it, or even mention it to his editors, because he believed it would only qualify as news if he could demonstrate that Nixon’s behavior had affected government policy. Hersh later spoke about the story in public in 1998. Women in the audience, he writes, immediately informed him of just how illegitimate and dangerous this standard was.

Then there’s the world’s oddest gossip. In 1968, Jerry Brown and Eugene McCarthy, whose presidential campaign Hersh was working on, told him they’d never smoked pot and had Hersh rustle up some joints for them. CIA operatives told Hersh that they didn’t like collaborating with people from the National Security Agency because they’re all “dweebs with protectors in their pockets who are always looking down at their brown shoes.” George Soros made a large donation to a nonprofit run by a friend of Hersh in order to entice Hersh to dinner to discuss Saudi Arabia and oil futures. When Hersh met with then-Syrian defense minister Mustafa Tlass at his Damascus home, Tlass wanted to show off his collection of pornography, largely focused on Gina Lollobrigida.

Most notably, there’s a tale about Lyndon B. Johnson on page 201 that everyone deserves to encounter without spoilers. Even Donald Trump has never expressed his contempt for the media with such, let’s say, vivacity. Journalists will come away from it extremely grateful that all Trump does is tweet.

Along the way, Hersh also provides a primer on the creation of investigative journalism.

To start with, he writes, it’s important to understand many important stories are always hiding “in the open.” This certainly applies to the massacre of hundreds of Vietnamese at My Lai, which occurred on March 16, 1968. Hersh first received a vague tip about it on October 22, 1969. After poring through microfilm, he found that the New York Times had, in a sense, already “covered” it — by reprinting a tiny AP story buried inside the paper about the court martial of one of the perpetrators. 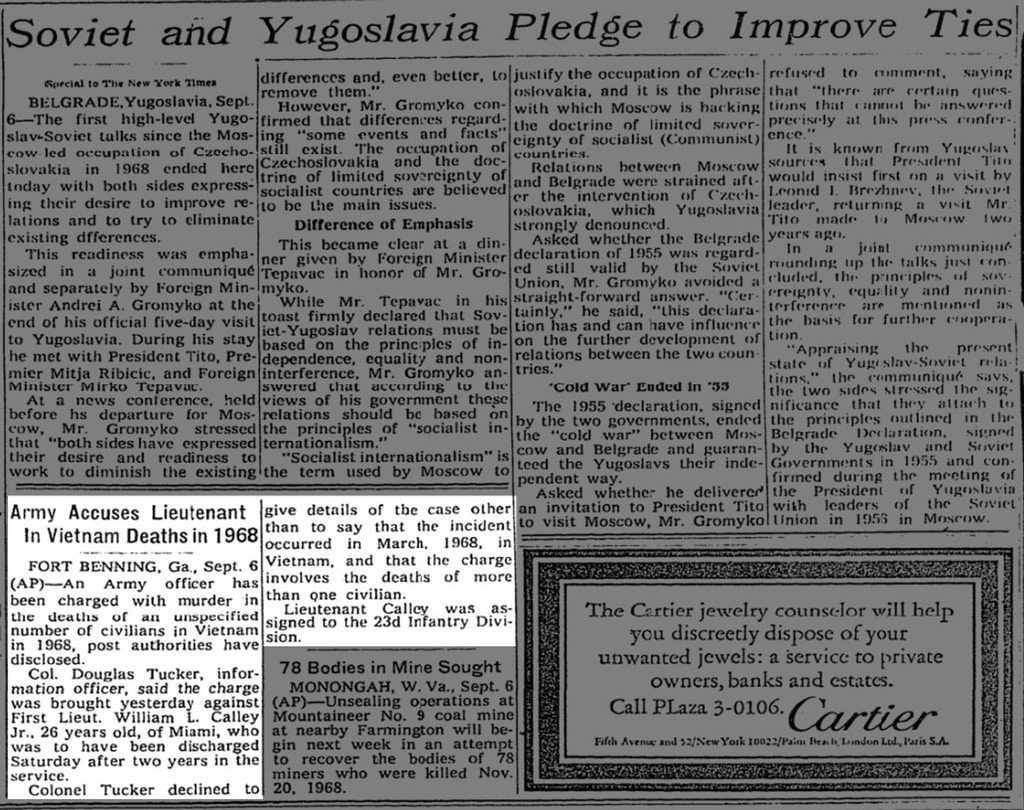 The brief AP article on the court martial of Lt. William Calley, published on page 14 of the New York Times on Sept. 7, 1969. Image: The New York Times; Screenshot: The Intercept

Next, Hersh says, “the core lesson of being a journalist” is “read before you write.” His stories in “Reporter” demonstrate how assiduous a reader he’s always been of other reporters, looking for details that suggest other angles that should be explored. He also expresses deep frustration that other news organizations largely fail to do the same for him, to build on his work.

Then look for sources, from the top to the bottom of any organization you’re covering. Despite Hersh’s reputation as a wild man devoted to tearing down American institutions, he actually emphasizes how many honest people can be found inside them if you go looking. At least in the past, he writes, Congress was “overflowing with members and staff with integrity and courage.” He has extensive contacts in the military whom he deeply admires. He says of senior intelligence officials that “there are many good ones who deserved my respect.”

Finally, take your time. “Being first,” he writes, “is not nearly as important as being right.” He doesn’t just cite the famous journalistic adage, “If your mother says she loves you, check it out,” but describes how it was coined by one of his first editors at City News in Chicago.

That’s a lot for one book. But it’s not all.

The most startling story in “Reporter” may be one that is never explicitly told: that America was once a place where someone like Hersh could come from nowhere to terrify everyone at the pinnacle of national power.

Hersh is not the child of journalists — his father owned a dry-cleaning store and died when Hersh was 18. Nor was he an Ivy League academic standout. Because of his father’s illness, Hersh barely made it out of high school and enrolled in a two-year junior college with no admission requirements. He didn’t even want to be a reporter — his first choice was to go work for Xerox, but they weren’t interested. In fact, he got his start in journalism largely by accident, in a series of events involving a late-night poker game and a gigantic helping of happenstance. Yet his name has been discussed with fear in corporate CEO suites, at CIA headquarters, and in the Oval Office.

The country where this could happen now seems to be passing into memory. But that’s all the more reason to read every page of Hersh’s thrilling book and consider whether we should try to become that country again. For his part, he understands how lucky he’s been to be exactly the right person at exactly the right place at exactly the right time. “I’ve spent most of my career writing stories that challenge the official narrative,” he writes in the last paragraph, “and have been rewarded mightily and suffered only slightly for it.”

Seymour M. Hersh has been a contributor to The New Yorker since 1993. He is a regular at London Review of Books and is writing an alternative history of the war on terror. His journalism and publishing awards include a Pulitzer Prize, five George Polk Awards, two National Magazine Awards, and more than a dozen other prizes for investigative reporting. Hersh won a National Magazine Award for Public Interest for his 2003 articles “Lunch with the Chairman,” “Selective Intelligence,” and “The Stovepipe.” In 2004 he exposed the Abu Ghraib prison scandal in a series of pieces; in 2005, he again received a National Magazine Award for Public Interest, an Overseas Press Club award, the National Press Foundation’s Kiplinger Distinguished Contributions to Journalism award, and his fifth George Polk Award, making him that award’s most honored laureate. He lives in Washington DC.

One Response to “Seymour Hersh’s New Memoir Is a Fascinating, Flabbergasting Masterpiece”