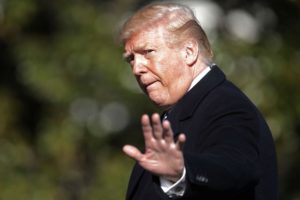 “I’ve seen a lot of bad deals in my life, but this Constitution is a total mess,” he said. “We need to tear it up and start over.”

Trump was scathing in his remarks about the two-hundred-and-twenty-nine-year-old document, singling out for special scorn its insistence on three branches of government.

“The branches thing is maybe the worst part of this deal,” he said. “The first thing we do when we pull out of the Constitution is get rid of two of those branches.”

He also called the First Amendment

“something that really has to go.”

He stopped short of accusing his predecessor, Barack Obama, of writing the United States Constitution, but said,

“He’s working hard behind the scenes trying to save it, because he knows that the Constitution is very, very bad for me.”

Vowing to replace the Constitution with “a new, much, much better Constitution,” he acknowledged that there might be some elements of the original document worth salvaging.

“We’re going to keep the Second Amendment,” he said, “and definitely the Fifth.”