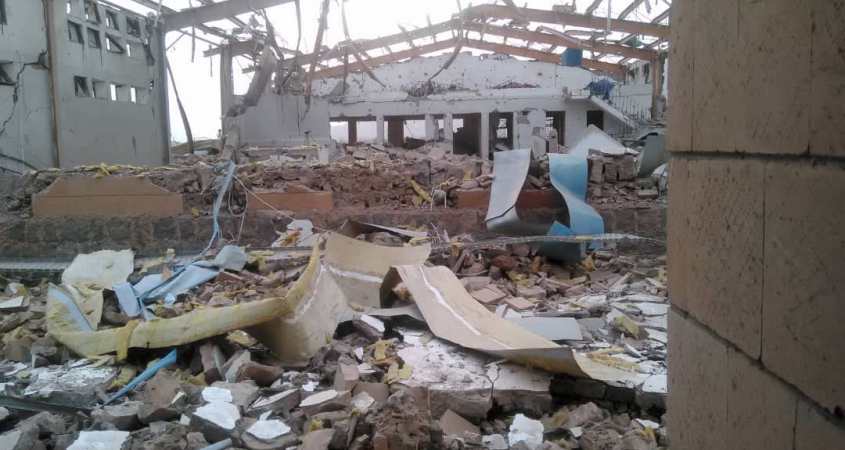 11 Jun 2018 – A military coalition formally led by Saudi Arabia and the United Arab Emirates, and supported by the United States and Britain, bombed a newly constructed cholera treatment in Yemen on Monday, June 11.

This attack comes after Yemen, the poorest country in the Middle East, suffered through the worst cholera outbreak in recorded history, with more than 1 million cases reported in 2017 alone.

The cholera treatment center was operated by the humanitarian organization Doctors Without Borders (known in French as Médecins Sans Frontières, or MSF). It was located in Yemen’s northwestern Hajjah Governorate, an area that has been heavily bombarded by Saudi Arabia for more than 3 years.

MSF said in a statement that the cholera treatment center had markings on the roof that clearly identified it as a healthcare facility. It added that the center has been destroyed and is now completely non-functional.

The U.S.-backed Saudi coalition has repeatedly bombed medical facilities in Yemen, including several operated by MSF.

The humanitarian organization tweeted photos showing the aftermath of the air attack:

"This morning´s attack on an @MSF cholera treatment centre in Abs by the Saudi and Emirati-led coalition shows complete disrespect for medical facilities and patients. Whether intentional or a result of negligence, it is totally unacceptable." pic.twitter.com/1PUEQXSmvE

#MSF has temporarily frozen its activities in #Abs #Yemen until we guarantee the safety of our staff and patients."¨João Martins, MSF's Head of Mission #Yemen pic.twitter.com/H7WhLrtaJt

“Whether intentional or a result of negligence, it is totally unacceptable,” he said. “The compound was clearly marked as a health facility and its coordinates were shared with the SELC (Saudi and Emirati-led coalition).”

“With only half of health facilities in Yemen fully functional, nearly 10 million people in acute need, and an anticipated outbreak of cholera, the CTC (cholera treatment center) had been built to save lives,” Martins added.

No civilians were killed in this attack.

Saudi Arabia has in the past bombed numerous hospitals and other medical facilities in Yemen run by MSF, killing dozens of civilians. Some of these attacks have involved “double-tap strikes,” in which the coalition has returned minutes later to bomb first responders.

The military coalition has bombed Yemen since March 2015 in an attempt to push the rebel Houthi movement, which is formally known as Ansar Allah, out of power.

Although the coalition is formally led by Saudi Arabia and the UAE, it enjoys significant assistance from the U.S. and U.K. Both countries have done hundreds of billions of dollars in arms deals with the Gulf regimes. Moreover, U.S. planes refuel Saudi jets, and American and British military officials have even physically been in the operation room for Saudi bombing.

Thousands of civilians have been killed by Saudi air strikes, which have devastated Yemen’s civilian infrastructure.

Due to the war, the medical system has effectively collapsed. Fewer than half the health facilitates in the majority of Yemen’s governorates are operational, and thousands of medical workers have gone more than a year without payment.

The United Nations World Health Organization reported in December that the number of suspected cholera cases in Yemen had reached a staggering 1 million, and this staggering figure has increased since then.

Despite this unparalleled humanitarian crisis, the UAE is pushing to accelerate the war in Yemen’s southwest. The U.S.-backed coalition is moving to attack the port city of Hodeida, which the U.N. has warned could lead to a massive catastrophe, in which millions of civilians starve.

Ben Norton is a journalist and writer. He is a producer and reporter for The Real News, and a contributor to the Grayzone Project and FAIR. Ben co-hosts the Moderate Rebels podcast with Max Blumenthal. His website is BenNorton.com.